Germany is marking the 80th anniversary of attacks on Jews that foreshadowed the Holocaust. November 9 has been a fateful date for Germany in other regards as well.

In a speech to the Bundestag on Friday morning, Steinmeier said the date was "marked by ambivalence" for Germany.

"On November 9, we Germans remember both things — the light and the shadows of our history," he told the chamber, referring to the Nazi Kristallnacht pogrom, or the Night of Broken Glass, of 1938, in which hundreds were killed and thousands of Jewish institutions were attacked.

Steinmeier was also present in Berlin's New Synagogue later on Friday, where Chancellor Angela Merkel and the president of the Central Committee of Jews in Germany, Josef Schuster, spoke at a commemoration of the 1938 pogrom.

Like the president, Merkel used the speech to draw historical lessons, by emphasizing the pogrom's place as part of a process of growing anti-Semitism in Germany that began with what would now be called hate speech and culminated with the systematic murder of Jewish people.

But she also warned that racism in Germany did not end in 1945. "If we look at the situation today, 80 years after the November pogroms, and almost 70 years after the foundation of the Federal Republic of Germany, then we see an ambiguous image," she said. "There is a blooming Jewish life in Germany again, an unexpected gift after the disruption of civilization of the Shoah [the Hebrew term for the Holocaust — Editor's note]. But at the same time we see a worrying anti-Semitism, which threatens Jewish life in our country."

Merkel mentioned the rise of hate speech on the internet, the attack on a Jewish restaurant in Chemnitz this summer, and attacks on people wearing yarmulkes, also known as kippas. She also tied all this to the rise of populism in times of uncertainty created by political instability.

"At such times, there is a particularly great danger that those with apparently simple answers to the difficulties and consequences of these upheavals become popular," she said. "Simple answers that too often come with a brutalization of language on the streets, as well as online. That is the beginning we must oppose decisively."

The Bundestag also commemorated the proclamation of the first German republic in 1918, and the opening of the Berlin Wall in 1989, two events that ushered in democratic eras.

"We can be proud of the traditions of freedom and democracy without turning away from the abyss of the Shoah," said Steinmeier. He called for the Weimar Republic, Germany's first modern democratic state, to receive the place it deserved in Germany's memory, stressing the courage of the men and women who had worked to establish it.

The president also drew parallels with the current political atmosphere and the revival of threats to democracy.

"Just as the failure of democracy was not a foregone conclusion on November 9, 1918, its success 100 years later is not guaranteed," he said, adding that "many no longer want to see parliaments as places for finding political solutions."

"In our actions we must prove that we Germans have truly learned from the past and truly become more vigilant because of our history," he said. "We need to take action any time another person's dignity is violated. We need to take a stand when a language of hatred spreads its tentacles. We cannot allow a situation where some people claim once again to be the sole voice of the 'true people' and marginalize others." 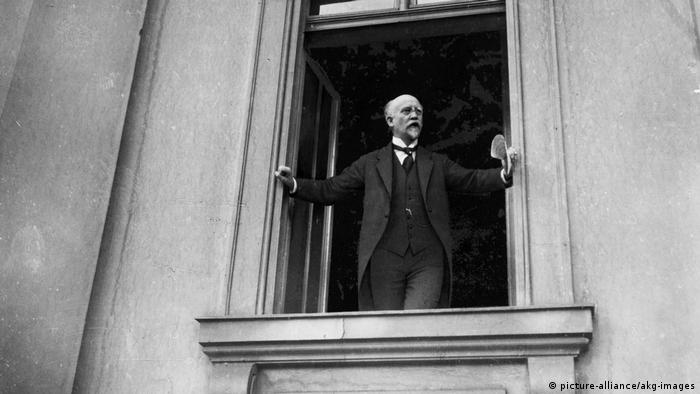 Steinmeier held his speech at the spot where Social Democrat Philipp Scheidemann proclaimed the Weimar Republic in 1918. The republic ended in the 1930s amid growing problems and instability that led to the rise of the Nazi regime.

The president said the "most difficult and painful question of German history" was how, shortly after democracy was established in 1918, enemies of democracy were able to win elections, plunge Germany into war with its neighbors and send Jewish families to the gas chambers.

Ahead of Steinmeier's speech, parliamentary speaker Wolfgang Schäuble also warned of growing dangers to society in the form of anti-Semitism.

"The veneer of civilization is thin," Schäuble said, referring to recent attacks on people of the Jewish faith. "Let us not endanger peace and freedom, ever again."

No invite for the AfD

In the synagogue, Josef Schuster warned against current trends in German politics, comparing today's "ideological arsonists" to the arsonists who destroyed synagogues in 1938.

He condemned attacks on refugees, on Muslim institutions, and emphasized that the far-right Alternative for Germany (AfD) had been the only parliamentary group not invited to Friday's commemoration, drawing a round of applause from the audience.

Without naming the AfD explicitly, Schuster condemned the party for minimizing the crimes of the Nazi era and stirring hate in the country.

The Jewish leader also told the story of how the New Synagogue survived the pogrom: Police officer Wilhelm Krützfeld protected the building and made sure the fire that had been laid inside was put out, an isolated act of bravery on a night when, though many Germans reacted with horror to the events, few actually protested.

The violence prefigured the Holocaust, in which 6 million Jews were murdered under Nazi rule in Europe between 1941 and 1945, many of them in extermination camps.