Germany faces dilemma over how to deal with Belarus | Germany | News and in-depth reporting from Berlin and beyond | DW | 16.11.2021

Germany faces dilemma over how to deal with Belarus

The situation is escalating for thousands of people stranded at the border of Belarus and Poland. The EU imposes new sanctions, while Belarus is threatening to cut off the bloc's gas supply. What is Germany's position? 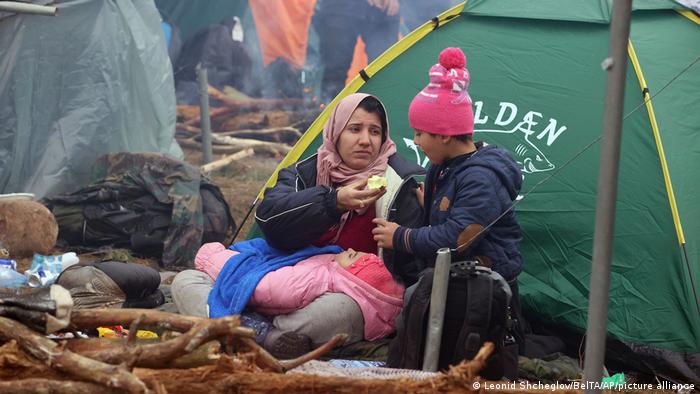 Exiled Belarusian opposition leader Sviatlana Tsikhanouskaya sat in the visitors' gallery of the Bundestag last week, as Germany's parliament debated the deteriorating situation at the European Union's external border between Poland and Belarus.

The mood in parliament was emotional — many lawmakers vented their great outrage — and yet the demands put forward during the hourlong session could not hide the current level of political helplessness.

The situation in the border region has dramatically worsened during the past few days. The Belarusian leader Alexander Lukashenko is accused by the EU of having more and more people from crisis regions flown into the country and brought to the border. They are now stuck there. Large groups of migrants have tried in vain many times to break through the barbed wire fence system which Poland is using to try and keep them from crossing through into Poland and thereby the EU.

At least 10 people have lost their lives, the Left party lawmaker Gökay Akbulut told the Bundestag: "People who didn't have to die." The socialist party does not only hold Belarus responsible for the situation, but also Poland. "Rejecting people who have fled without individually checking their asylum procedures is a clear breach of the Geneva Conventions, the European Convention on Human Rights, and current asylum laws in the EU," warned Akbulut.

The parliamentary leader of the Greens, Franziska Brantner, spoke of a "humanitarian disaster," adding that: "Lukashenko is instrumentalizing people by flying them in from Damascus, Dubai, Istanbul or Moscow. Despite this, these people are not weapons. They are not a bargaining chip; they are human beings with their inherent dignity."

German Chancellor Angela Merkel discussed the situation with Lukashenko on Monday November 15. It was the first such phone call with a Western leader since Lukashenko suppressed mass protests against his rule last year.

The Belarus leader said he and Merkel agreed the standoff should be defused.  But he said he had "differing" views with Merkel on how the migrants got to Belarus, with the West saying Minsk had brought them there as revenge for sanctions.

This was the latest initiative by the outgoing chancellor in an attempt to defuse the crisis."I spoke to Russian President Vladimir Putin today and asked him to appeal to President Lukashenko. Because people are being used here, they are victims of an inhumane policy, and something must be done about it," she said last Wednesday, adding that the problems needed to be solved in a way "that is humane — that is unfortunately not happening right now."

Merkel's time as chancellor is ending — the center-left Social Democrats (SPD), Greens and neoliberal Free Democrats (FDP) are currently in negotiations to form a government. The Green lawmaker Brantner told the Bundestag that one of the "big tasks" of the next government was to scrutinize the policy toward Russia.

Putin is covering up Lukashenko's "perfidious blackmail attempt," and keeping the Belarusian regime alive, Brantner said: "We must reduce our vulnerabilities and advance a new policy of dialogue and toughness." 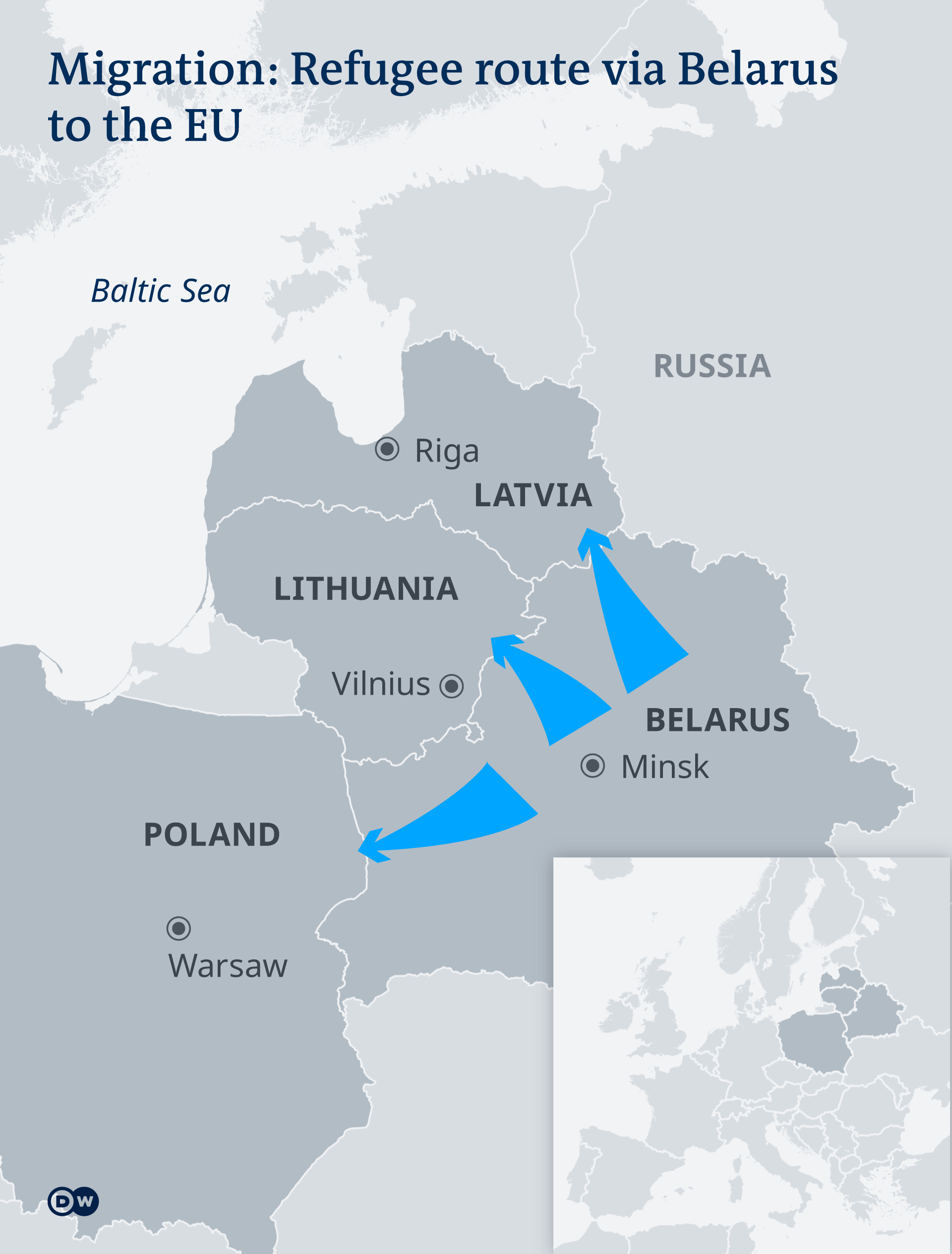 Brantner called for further sanctions — targeting the Belarusian potash industry, and also political leaders: "The Christmas season is a favorite time for shopping in Munich and other German cities, especially for the powerful Belarusian elite. That doesn't have to be possible."

There also needs to be consequences for airlines that transport migrants from the Middle East to Belarus. Brantner hoped that Germany's caretaker government would do something about that as quickly as possible, she argued.

Current Foreign Minister Heiko Maas promised exactly that — as well as consequences for the transit countries involved. "No one should be allowed to participate in Lukashenko's inhumane activities with impunity," he said.

It is no simple matter to sanction airlines, because they are technically not breaking any laws. "But we have informed everyone that the EU member states are very much considering holding those that are accomplices of a smuggler liable," Maas said. "After all, landing rights are granted in each individual member state."

Germany's CDU/CSU conservatives against taking in the migrants

The humanitarian care of the people in the Belarusian border area has priority, Maas said. "The fundamental values of the European Union and its member states include that we do not leave people in need alone, and we must also uphold these shared values at our external borders."

In this situation, international law requires that humanitarian access to be granted. International aid organizations and civil society groups are on standby. "And that needs to be made possible," Maas said.

Speaking for the conservative parliamentary group of the center-right Christian Democrats and their Bavarian sister party, the Christian Social Union, lawmaker Thorsten Frei called on the government to support Poland in securing the external EU border with Belarus. As a last resort, Frei said, border controls could be reestablished at the border between Germany and Poland, including sending migrants back to Poland in accordance with the Dublin Regulation, which states that people must apply for asylum in the first EU member state that they enter.

Under no circumstances should the migrants in the border region be distributed throughout Europe, Frei said. "This is what Lukashenko is counting on. That would increase the pressure on the Polish border and drive a wedge into the European Union. That is the dumbest thing you could want at this point," Frei said.

The AfD agitates and Lukashenko escalates

The far-right Alternative for Germany (AfD) party also sees it that way. They used the debate in the Bundestag to push their anti-migration message once again. "Immigration is not a human right. Illegal border crossing is a criminal act," AfD lawmaker Gottfried Curio said, adding: "Poland is protecting itself, Germany, and the entire EU."

The AfD submitted a parliamentary motion calling on Germany's federal government to support the measures of Poland, Hungary and other EU states "to ward off destabilizing migration movements." According to the party, this includes providing support for the construction, expansion and maintenance of border fences.

Lukashenko, however, is threatening to stop the flow of gas supply via the Yamal-Europe pipeline in response to fresh EU sanctions. "We are heating Europe and they are threatening us," Lukashenko said, according to the Belarusian state news agency Belta.

"What if we cut off gas supplies? If they impose new sanctions against us, we must react," Lukashenko said.

This article was originally written in German and updated to reflect recent developments.

Germany says the number of migrants arriving from Poland and Belarus has soared in recent months. The EU accuses Belarus of fueling mass migration, and Poland has said it will spend millions to build a wall.

Belarus border residents rattled by migrants at their doorstep

Hardly anyone used to stray into the villages on Belarus' western border. But with more migrants stranded here, residents are unsettled. Ales Petrowitsch reports from Belarus' border with Poland.

As the crisis on the border between Poland and Belarus deepens, the EU is helpless as Minsk and Warsaw engage in cynical power politics. The migrants caught inbetween are paying a heavy price, DW’s Barbara Wesel says.