As the crisis on the border between Poland and Belarus deepens, the EU is helpless as Minsk and Warsaw engage in cynical power politics. The migrants caught inbetween are paying a heavy price, DW’s Barbara Wesel says. 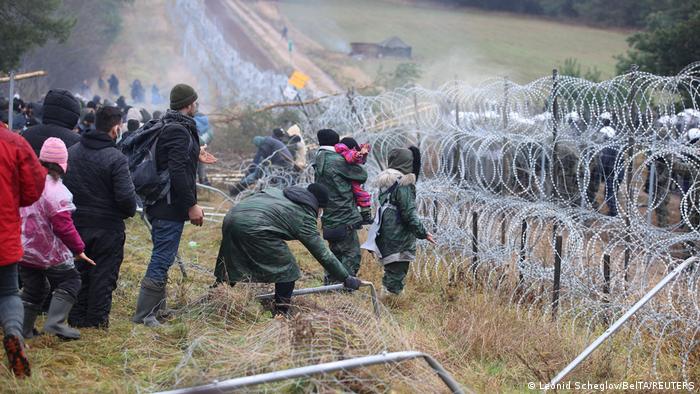 There are reports of an occasional shot fired on the border between Poland and Belarus. That is not unusual when young border guards are sworn to the unconditional defense of their homeland. But it is dangerous, because even small-scale hostilities on the frontier between enemies can quickly ignite into a blaze.

This crisis, above all, shows the weaknesses of Europe and the cynicism of power politics not only in Russia and Belarus, but also in Poland.

Ever since hundreds of thousands of migrants came to Europe in 2015, exposing fault lines in the European Union, refugee policy has been one of the most toxic topics in Brussels. The dispute over asylum, migration and a common policy is more bitter than squabbles over money, climate protection or anything else that divides EU member states.

Time and again, new attempts to forge common rules have failed. Questions such as who is allowed to enter the EU, who is entitled to asylum or should be given temporary protection, which countries should take in how many refugees, and what social benefits must be provided — all of this is argued incessantly.

When refugee policy appears on the agenda, nationalism takes over the discourse. It's clear that it was the sheer malice of some member countries that produced this policy failure. And first and foremost, it was Hungary and Poland that prevented any common ground and progress.

When Warsaw now calls for European help to deal with the migrant crisis on its border with Belarus, the government only wants money for building a wall on the border. The fact that there is no joint acceptance and distribution of the refugees who are stranded there is the Polish government's own fault. It has always refused to show solidarity, so now it can hardly expect it for itself.

Cynicism in Moscow and Minsk

Western officials have accused the leader of Belarus of sending migrants to EU borders as retaliation for sanctions. It's an attempt to use human beings as weapons in a kind of hybrid warfare. But, whose idea was this - the ruler's in the Kremlin or the dictator's in Minsk? The clever nastiness of the idea seems to point more to Vladimir Putin than to the ruler in Belarus who at times comes across as brutish and simple at the same time. One could almost see Russian Foreign Minister Sergey Lavrov grinning when he suggested that the EU could buy its way out of the refugee transports to the Polish border, as it used to do with Turkey. The old political hand knows the weaknesses of his opponents.

Lukashenko, however, now has a first-class blackmailing tool in his hand. Accusations of inhumanity and mafia-style human trafficking have no impact on him. He is already a pariah in Moscow and has no reputation to lose. Also, the sanctions from Brussels so far haven't really hurt him. That could only change if the EU imposes serious export bans. But it has so far refrained from doing so, out of consideration for the citizens of Belarus and for its own companies.

Meanwhile, Poland is giving the impression that the country's security is in acute danger. The president has even spoken to NATO, as if his country were being hounded by Ghengis Khan and his Mongolian horsemen.

But the commotion in Warsaw is mainly propaganda. We're talking about a few thousand refugees who have followed the ratcatcher methods of the Belarusian government. And they are now supposed to pose a threat to 40 million Poles? This claim is simply absurd.

But the border dispute is very convenient for the government led by the Law and Justic Party (PiS ) in Warsaw. It has recently slumped in the polls, because many Poles have turned away from it because of a strict ban on abortion, hostility toward Europe and the dismantling of the rule of law.

To counter the government's flagging popularity, Jaroslaw Kaczynski, PiS party leader and deputy prime minister, is unleashing a wave of xenophobia and nationalism that is putting the opposition in a difficult position. It's in keeping with the old rule that you should never pass up the chance to capitalize on a crisis.

People are the losers

The losers in this cynical game are the people who are stuck in limbo in the cold and darkness in the forests and swamps on the Polish-Belarusian border. The government in Warsaw is not even allowing aid organizations access to provide them with supplies. This violates international conventions but the ruling PiS party probably also believes it no longer has any reputation to lose.

The EU, for its part, should stop its blind declarations of solidarity with Poland and put pressure on the government to work immediately on a humane solution for the people on the border, perhaps with the help of international organizations. The rest is a matter of negotiation with the refugees' countries of origin and transit countries as well with Russia and Belarus. It is urgent because winter is approaching and could lead to more deaths on the border.

Ukraine: Biden, Zelenskyy talk de-escalation with no end to tension in sight 2h ago