German state premiers have agreed on a monthly license fee for computers that can access television and radio programs via the Internet. The move has attracted criticism. 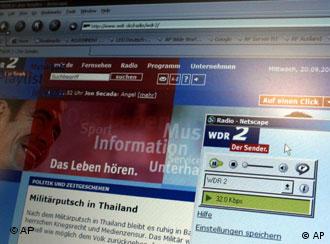 Watching television on computers may now cost some German households

German state premiers agreed on Thursday that any household or company that does not already have a license will have to pay the new levy of 5.52 euros ($6.92) monthly, which is the same as the one currently charged for radio access.

German households pay just over 17 euros ($21.31) a month to watch TV, but since more radio programs are available over the Internet than TV, state broadcaster ARD wanted the fee for computers and phones to match that of radios.

The plan has attracted sharp criticism from industry groups that argue it would harm German firms, especially small and medium-sized businesses.

Michael Ruiss of the German Federal Association for Young Entrepreneurs (BJU) said the decision to impose a license fee on computers and mobile phones reeked of a "certain political arrogance."

"Decisions such as imposing a license fee on computers undermine the confidence of businesses in politics. Instead of improving economic conditions, entrepreneurs are being further burdened."

Germany's TV license fee is among the highest in Europe, with only Switzerland and the Nordic countries paying more. It funds four national public broadcasters, several local broadcasters and all the country's public radio stations.

Decision Postponed on Fee for Internet-PCs

German business groups have lashed out against a proposal to introduce a new fee on personal computers. Regulators have decided to postpone a decision until October. (24.09.2006)

Soon, a new broadband technology called WiMAX is arriving on the German market. This is great news especially for the thousands who still have yet to be able to get a DSL cable connection. (22.07.2006)

Podcasting: Giving Ears to the Internet

A trend that started in the Weblog scene, podcasting gives people a chance to speak their mind and even become a DJ. Some call it the radio of the future and an alternative to today's broadcasting. (06.01.2006)