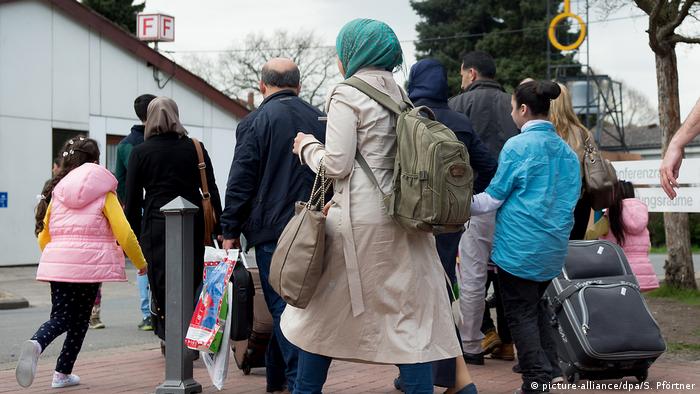 The European Court of Justice (ECJ) on Tuesday cleared the way for Germany to deport asylum-seekers to other EU member states.

Judges in the Luxembourg-based court ruled that weak social benefit systems and living conditions in certain countries were not grounds to block transfers.

Read more: Rome warns Germany not to deport migrants back to Italy

What did the ECJ say?

What are the EU's asylum rules?: Under the EU's Dublin Regulation, asylum-seekers must lodge their claim in the first EU country they set foot in. That country is responsible for protecting that individual and processing his or her application. Migrants who travel onwards to another country illegally and lodge an application there instead can be sent back to the point of entry. This transfer must take place within a six-months.

How the ECJ case came about? Judges in Germany had asked the ECJ to interpret the bloc's asylum rules to clear up doubts about when deportations could occur in several cases. One case involved a Gambian man who had lodged an asylum application in Italy before traveling to Germany and filing another claim there. He argued he should not be sent back to Italy because of poor conditions for refugees there. Other cases involved a Palestinian who came to Germany via Bulgaria and a Chechen who entered via Poland.

What happens now? The ECJ's ruling is significant because it gives Germany the go-ahead to return asylum-seekers to the point at which they entered the EU. However, the final decision on the fate of the asylum-seekers in question will ultimately be up to Germany's federal courts. It's unclear how Hungary, Italy and Poland will respond, given that all three governments have resisted taking in refugees. Last year, Germany transferred more than 8,000 asylum-seekers to other EU states. Most went to Italy. Only a few went to Greece and none were accepted by Hungary.

Human rights concerns: Activists argue that the conditions for refugees in some of entry countries, such as Greece, are deplorable. They say that instead of sending asylum-seekers back, Germany should instead take over responsibility for their applications. Germany currently sends very few, if any, asylum-seekers to Hungary, Bulgaria and Greece, according to the Interior Ministry, which said there was no guarantee the countries were upholding EU asylum rules.

Hungary before the courts: The European Commission, the EU's executive arm, took Hungary to court in mid-2018 over its treatment of asylum-seekers. Brussels accused the government of Viktor Orban of violating EU laws by keeping asylum applicants in transit zones on the Hungarian border for excessively long periods of time. That case is ongoing.

Punitive social handouts to dissuade "Dublin" asylum-seekers are wanted by interior ministers of the 16 regional states, a report says. One in three applicants arriving in Germany via other EU nations could be affected. (16.12.2018)

A legal opinion presented to the EU's top court says mandatory quotas for the relocation of refugees across the bloc should stand. Hungary and Slovakia have challenged the EU measure, claiming it's illegal. (26.07.2017)