Ahead of next week's EU-China talks, German lawmakers have spelled out what they expect for Europe's relationship with Beijing. They also called for human rights violations to have consequences. 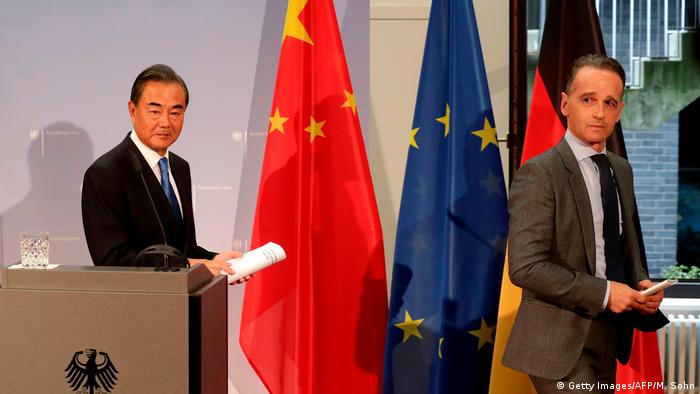 German lawmakers on Wednesday discussed the European Union's relationship with China ahead of high-level talks next week between Brussels and Beijing.

German Chancellor Angela Merkel is expected to speak with Chinese President Xi Jinping via video link during the talks scheduled for Monday. Germany currently holds the EU's rotating presidency, and the bloc's relationship with China is at the center of Berlin's foreign policy goals.

"The EU is likely facing a litmus test in global politics," Niels Annen, a Social Democrat deputy minister in the Foreign Ministry, told colleagues in the Bundestag, the lower house of German parliament. "It is therefore logical that China is playing an increasingly central role in our foreign policy."

The EU is China's biggest trading partner, and Brussels places enormous importance on deepening economic partnership. However, the EU considers China to be a both a "partner" and a "competitor" in a "systemic rivalry."

This means human rights issues like Uighur internment camps in Xinjiang, Beijing's crackdown on Hong Kong with a draconian security law, and China's more aggressive foreign policy are making it difficult for the EU to reconcile building business with democratic values.

Wednesday's debate was held in response to a request by the Greens for a "collective, value-oriented and realistic EU-China policy."

Veteran Greens politician Jürgen Tritten said that Germany calling China a "strategic partner" was a "naive" idea based on the assumption that "growth would lead to democracy."

However, China's economy has grown alongside "less rule of law, less freedom and total surveillance, while China considers this to be a model for the world," Tritten said, calling for China's human rights violations to have economic consequences.

Since 2014, Brussels has been trying to move forward on an investment agreement with Beijing to safely open up markets in China for European business. However, negotiations have stalled as EU officials have accused China of failing to live up to commitments.

"We need more reciprocity and fair conditions for an investment agreement," said Annen.

Gyde Jensen from the business-friendly Free Democrats (FDP) said that the German government should completely redefine its "long outdated" China policy, due to human rights.

"Let's stick with this newfound reality," she said.

There was consensus across most of the parties that the EU should not underestimate itself when challenging China.

"China cannot do without the world's largest internal trading bloc," said Trittin, albeit not addressing the EU's reciprocal dependence on China.

However, a clear path forward combining economic cooperation with competing value systems looks tough for both Germany and the EU.

"We also want China to be our partner, but this has become much more difficult since Xi," said Annen.

In a statement released ahead of the debate, the German government said it expected China to assume international responsibility "corresponding to its economic and political weight" within a "rules-based international order."