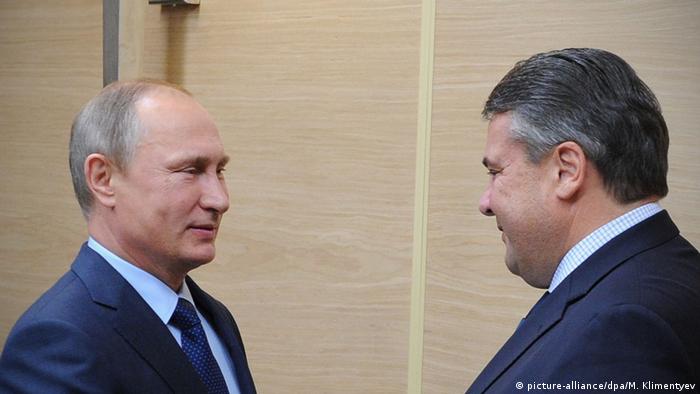 Following a meeting with the Russian president on Wednesday, Russian state news agency TASS reported that Gabriel said quarrelling between Russia and Western governments had worsened the conflicts.

"My personal opinion is that we need to do everything we can to reach a deal to leave certain past situations behind and find new ways to improve collaboration," Gabriel said.

Tensions between Russia and Germany were stretched last spring after Russia annexed the Crimea in eastern Ukraine in response to Kyiv ousting its pro-Russian president.

Since the annexation in 2014, western allies have repeatedly accused Moscow of supporting pro-Russian separatists in the region with troops and weapons - claims which Russia continues to deny.

The vice chancellor told Putin on Wednesday that he now expects more effort from Russia in resolving the crisis in eastern Ukraine, adding that the fact that Kyiv is still unable to control the borders to separatist regions was a "huge obstacle."

More recently, Russian-Western relations have been put under yet more strain since Moscow began an aerial bombing campaign over Syria on September 30. Russia, claims the mission is to support Syrian President Bashar al-Assad, who is one of Russia's closest allies in the Middle East.

Western countries have in the past accused Russia of targeting US-backed opposition groups in air strikes. Moscow, however, says their strikes are solely aimed at "Islamic State" (IS) militants.

On Saturday Russian Foreign Minister Sergei Lavrov said Moscow was now ready to coordinate its air strikes in Syria with the US. In light of the progress, the German vice chancellor said on Wednesday that the European Union and Germany also play a vital role.

"I understand that for you the US is your main conversation partner for issues in Syria and Ukraine, but I believe that Germany and the European Union should also be important partners," Gabriel said.

The Saudi foreign minister has said a renewed diplomatic push to end the conflict in Syria had yielded some progress, but further consultations are needed. He reiterated his country's view that Assad must go. (25.10.2015)