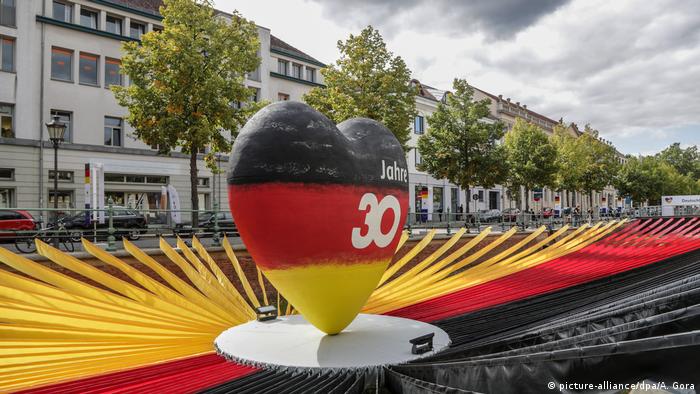 German President Frank-Walter Steinmeier on Saturday paid tribute to the courage of protesters who led the peaceful revolution that paved the way for the reunification of East and West Germany 30 years ago.

Commemorations to mark German Unity Day took place in the city of Potsdam, about 25 kilometers (15.5 miles) southwest of Berlin. Such a momentous anniversary would usually be met with fervor, but this year's festivities have been overshadowed by the coronavirus pandemic.

"We look back with gratitude at the end of the Cold War and the beginning of a new era," Steinmeier said in a keynote speech at the official ceremony. "Today we live in the best Germany that has ever existed."

Chancellor Angela Merkel struck a similar tone, saying "We have to be brave again today."

Read more:  What does unity mean to you?

Democracy under threat from right-wing extremists

Steinmeier called for safeguarding democracy and freedom, noting that some groups in Germany are beginning to question these values.

"According to the president, the division in Germany is no longer just between the eastern and western parts of Germany; it is becoming more mainstream between people who believe in democracy and those who question it," said Nina Haase, DW's political correspondent in Berlin.

The president used anti-lockdown protests as an example of displeasure among some parts of the German society.

"A vast majority of anti-coronavirus protesters are peaceful but there are fringe groups that have tried to hijack this movement. Some of them are considered neo-Nazis or right-wing extremists," Haase said.

The main proceedings were taking place with far less fanfare than usual in order to keep the number of attendees down while maintaining social distance measures. A morning ecumenical service at Potsdam's Church of St. Peter and Paul was also scaled down, along with similar religious and musical events all over the country, many of which were livestreamed.

"We all wanted to celebrate the 30th anniversary of German unity a different way. With packed halls with big open-air festivities here in Potsdam, with thousands of people from all over Germany and from our European neighbor states," Steinmeier told the audience, which included Chancellor Merkel and other dignitaries.

"But even if we can't hold big official celebrations, the significance of this day remains. German Unity Day is an important moment to think back with joy and courage."

Everything you need to know about German reunification

Everything you need to know about German reunification

French President Emmanuel Macron marked the day in German and French by praising "European resolve" on Twitter. He said: "Germany was reunified 30 years ago, which opened the way to European reunification. Today, we are defending democracy and progress, our sovereignty and European solidarity together. Our European resolve unites us!"

The president said Germany could feel pride about developing into a "reunited, free and democratic country in the middle of Europe" — adding that no pandemic could take that away.

But Steinmeier acknowledged that there had also been difficult periods in the last three decades, stressing that the unification process required a critical look as well as an open discussion about "mistakes and injustices."

He referred to the economic and other differences that still persist between the former West and the less-prosperous former East.

"There is no question that the upheaval hit the people in the east of our country much harder than those in the west," Steinmeier said. "And it still leaves its mark today, despite all the great progress made."

He also warned that when people feel permanently disadvantaged, "cohesion crumbles, mistrust in politics increases, and the breeding ground for populism and extremist parties grows." He urged Germans from all over the country to "address our grievances" and "listen to each other."

Germany was split between communist East Germany and the western Federal Republic of Germany after World War II and remained separate nations during the four decadelong Cold War.

The path towards reunification as one nation gathered pace after the fall of the Berlin Wall on November 9, 1989.

Three weeks later, then West German Chancellor Helmut Kohl unveiled a 10-point plan for unification, based on the assumption that the process would take a decade to fulfill.

However, on October 3, 1990, less than a year after Kohl's proclamation, the German Reunification Treaty went into effect, officially making Germany one country again.

German Unity Day has been celebrated as the country's national holiday ever since.

"We have to remember that the fall of the Wall and the unification of Germany marked the end of the Cold War and a whole new historic period for the world — it's not just about Germany," DW correspondent Hans Brandt said.

When German reunification was completed 30 years ago, East Germany's top football clubs were integrated into the Bundesliga pyramid. But they struggled to compete and some huge names have slipped down the leagues.