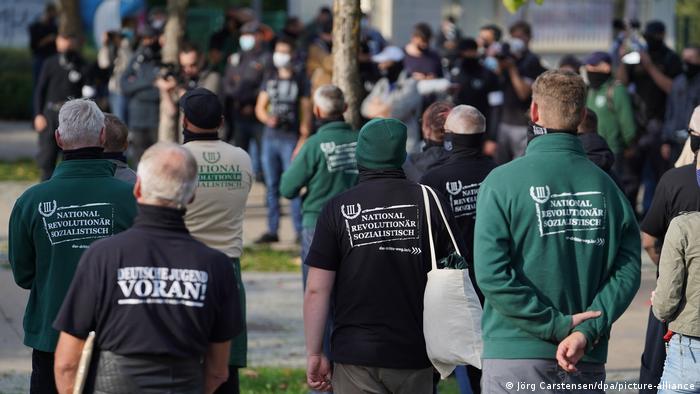 Between 250 and 300 neo-Nazis clashed with police and counterdemonstrators on Germany's Unity Day celebrations in an eastern district of Berlin on Saturday.

The demonstration, organized by the far-right organization Der III. Weg ("The Third Path") in the Lichtenberg district, was blocked at both ends of its planned march by several hundred counter-demonstrators, who claimed victory after the far-right protesters were forced to find an alternative route.

According to the DPA news agency, the demo, registered under the slogan "The people want a future," was faced with a heavy police presence in riot gear, supported with police dogs and a helicopter.

The counterdemonstrators, many from far-left groups united under the name "Berlin alliance against the right," sat down in the path of the march, at one point barricading the road with shopping carts and other objects.

Some altercations broke out after the counterdemonstrators refused to comply with police requests to move, and though some were arrested, the blockade remained in place, public broadcaster RBB reported.

There were also repeated attempts by the far-right demonstrators to break through police lines, which resulted in violent clashes. In the end, protest organizers agreed to take a shorter route on their march.

Police said officers had been injured during the clashes, which saw "occasional stones and bottles thrown" at them, though it was not clear how many or how serious the injuries were.