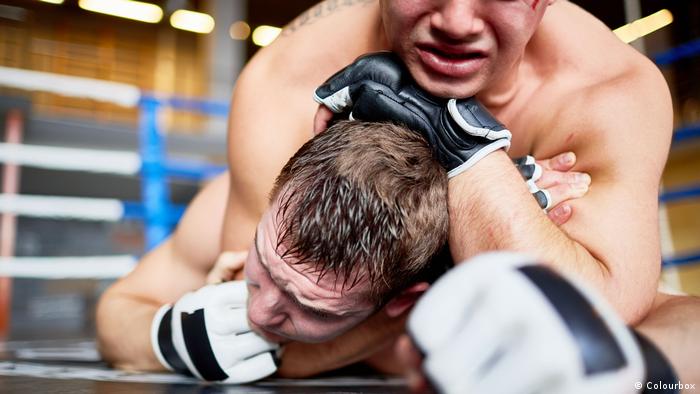 The event, in Magdeburg, about 160 kilometers (100 miles) southwest of Berlin, was set to take place on the grounds of a motorcycle club.

Advertised as the "Battle of the Nibelungs," the competition was banned due to reasonable suspicion that many of the participants had ties to far-right extremism.

Read more: A tale of sex und crime: Just who are the Nibelungs?

Around 140 police officers took part in the raid or were placed on standby nearby.

When they arrived, a boxing ring and other equipment had already been set up for the event, which was set to include a variety of combat sports.

The officers later confiscated the ring and ordered all attendees to leave the premises. The participants included 90 people from 10 different states.

Germany's intelligence services have described the event as "the largest and most renowned European martial arts event for the right-wing extremist scene."

The tournament had taken place several times in the eastern city of Saxony and was officially banned last year, after a leading neo-Nazi from the city of Dortmund registered the event in his name.

Police sent around 300 officers to enforce the ban on last year's event, which was set to be held in Ostritz, a small city on the border with the Czech Republic.

The fight has been held every year since 2013, and has seen hundreds of right-wing extremists from across Germany, Europe and even the United States take part, according to the office.

The event is organized "by young Germans who are united by the dedication and enthusiasm for 'their' sport and who do not want to be subject to the yoke of the prevailing mainstream," the event's website said.

"The Battle of the Nibelungs does not want to understand sport as part of a rotting political system, but as a fundamental one to an establish an alternative."