A tale of sex und crime: Just who are the Nibelungs?

A new production of Wagner's "The Ring of the Nibelung" at the Bayreuth Festival was called off for now. Time to take a look at the myth behind the work. 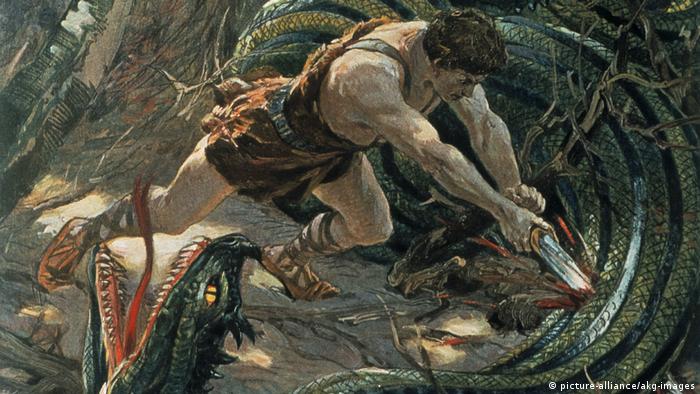 The dragon fight is a central element of the Nibelung saga

A bromance sets a chain of events in motion that eventually culminates in the extinction of an entire people. Such are the affairs of men.

But the women in the Song of the Nibelungs hardly set a shining example either: After a proud queen publicly humiliates her equally proud sister-in-law, the latter cooks up a plan to murder her rival's husband. That unfortunate man is Siegfried; his wife: Kriemhild.

In the end, one of the very few to survive the carnage is Kriemhild's second husband Etzel, also named Attila. Yes, as in Attila the Hun. He ends up eating his son's heart and drinking wine out of his skull. Not of his own design though, but his wife's. The gruesome tale ends with these words in Middle High German: "hie hât daz maer ein ende: daz ist der Nibelunge nôt." (The tale ends here: This is the downfall of the Nibelungs).

Heroes from a different time

A sense of looming disaster is palpable throughout the saga. A young warrior slays a dragon, bathes in the creature's blood and becomes invulnerable — nearly. Legend has it that that happened just a few kilometers up the River Rhine from DW headquarters in Bonn, in the "Seven Mountains." Seen from a distance, the chain of hills is said to resemble the spikes on the back of a reclining monster.

With its 2,400 verses, the Germanic tale of heroes by an unknown author can be dated with some certainty from between 1200 and 1205 because the text includes references to specific events in those years. And although the greater part of the story is set in the Rhineland, geographical references indicate that the epic was penned in the Danube region, somewhere between Passau, Vienna and Esztergom in present-day Hungary.

That's the easy part. More complex is the fact that the saga exists in at least nine different text versions, plus further poetic and prose writings scattered throughout the Germanic lands. These differ widely in the characters' names, qualities and deeds.

That only stands to reason, for the story at the root of the tale dates not from the 13th but from the 5th century A.D. and was carried forth in a purely oral tradition by traveling minstrels for eight centuries. In fact, even by the time of the initial historic event — the downfall of the first German kingdom on the Rhine in the year 436 — central protagonists like Siegfried and the dragon had already been around as legends for ages.

Nibelungs as far as the eye can see

Traces of the epic can be found everywhere in German geography and culture. In the state of Hesse, the "Nibelung Train" goes to several communities mentioned in the story. At Worms on the Rhine, the scene of much of the action, the "Nibelung Festival" has taken place every year since 2003 — or nearly every year: The 2020 edition was called off due to the coronavirus pandemic.

In a quieter setting, in far-off Antarctica, the "Nibelung Valley" stretches across a vast expanse of ice-free tundra. 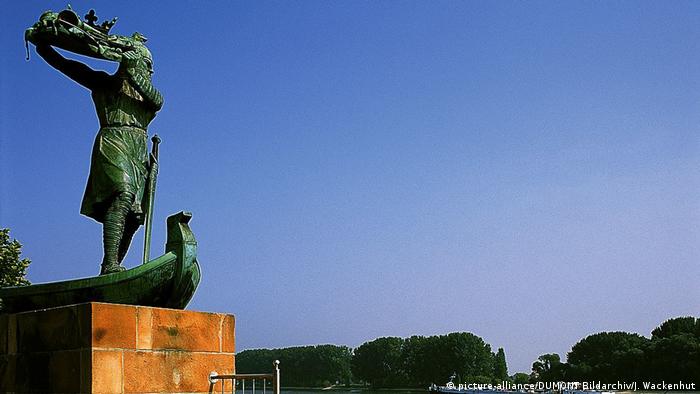 The German language is rife with Nibelung references, too. In olden times, "Nibelungen-Treue" (Nibelung loyalty) stood for the unconditional loyalty of a lord for his vassals or allies. Kriemhield's brothers would thus rather die than release her husband's murderer, Hagen. So it goes in the Song of the Nibelungs. Much later, in the Third Reich, "Nibelungen-Treue" came to stand for the unconditional loyalty of a people to their "Führer," even — or specifically — in the case of impending catastrophe.

The Nibelung saga has been filmed several times, beginning with director Fritz Lang, who brought it to the silent screen in 1924. Now, after the huge success of Game of Thrones, the world is ready for another filming, says producer Nico Hofmann.

The most famous version, however, is The Ring of the Nibelung by the composer and librettist Richard Wagner. In it, he undertook to tell the entire history of the world, from beginning to end. 2020 was supposed to be the year of a new staging of the opera tetralogy at the Wagner Festival in Bayreuth. Then, a force stronger than the magical ring intervened: the coronavirus, leading to the cancellation of the season.

Wagner, incidentally, based his text not so much on the German Song of the Nibelungs as on the Icelandic version, the Poetic Edda, which also dates from the 13th century. The Vikings had taken the tale along when they settled Iceland five centuries earlier. 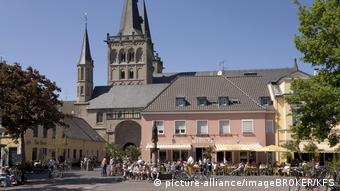 According to the story, Siegfried comes from Xanten on the lower Rhine

In the Icelandic tale, Nibelungs are dwarfs who mine gold in a subterranean realm, thus accumulating the world's biggest treasure. "Nibelung" is related to the German word "Nebel" (fog or mist), indicating that the people in reference came from a foggy region or that they themselves are somehow shrouded in mystery.

But in the epic poem in Middle High German, the Nibelungs are — at first, at least — the characters Schilbung and Nibelung, sons of a king. Locked in an inheritance dispute, they ask Siegfried to arbitrate. They're discontented with his proposed solution, though, and in the following altercation there's only one survivor: Siegfried — and he, now in possession of the fortune, is himself a "Nibelung." After his own demise, the treasure is passed on to the people of his widow Kriemhild at the court in Worms, making them "Nibelungs."

It's enough to make one's head spin. But consider that nowadays, a tale relayed by word of mouth can become distorted within hours or even minutes. The Nibelung saga, however, was propagated in an oral tradition for eight hundred years. No wonder it turns up in various versions and that in it, heathen customs alternate with Christian ones, and supernatural beings and courtly personages share the same names, exist in parallel versions or merge into one another. 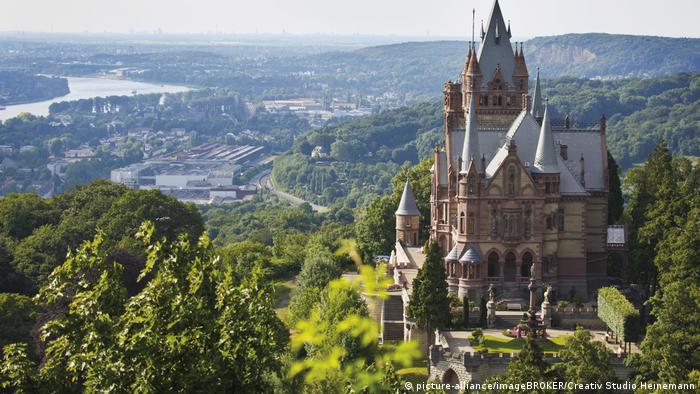 Just a few miles upstream from DW headquarters in Bonn: The "Drachenfels" (Dragon Rock) is called the world's most often climbed mountain

Just what kind of guy is this Siegfried, the shining hero? In Wagner's version, he's not all that clever. Nor does he need to be, as he has both fearlessness and strength to his advantage — and a special sword with which he can slay a dragon. Afterwards, he discovers that dragon blood makes his skin impenetrable.

Anyone who spends time under the shower knows though that there's one part of the epidermis that is difficult to reach with one's hands: between the shoulder blades. Dragon blood does not touch that zone of Siegfried's body either, with fatal outcome.

In one version of the story, a leaf from a lime tree happens to fall on that part of his back, insulating it from dragon blood and rendering him vulnerable there. However this German version of the "Achilles' heel" came about: Siegfried's lovely wife Kriemhild naively sews a garment for her godlike husband that is adorned at that spot with a cross. So the villain Hagen, in on the secret, can aim with precision and stab Siegfried in the back.

With a little help from his friend

But why in the world would one want to murder the shining hero? Enter Brunhild from a kingdom to the North. To claim Kriemhild as his bride, Siegfried first obliges himself to help her brother Gunther in matters of love and war. Specifically, Gunther has set his sights on the beautiful Brunhild.

But there's a catch: She's not just beautiful, but strong as well, and will only give herself to a man who can prevail over her in battle. It would take a stronger man than Gunther. Someone like Siegfried. And at Gunter's side, rendered invisible by a magical cloak — part of the Nibelung spoils — Siegfried does in fact vanquish Brunhild without her knowing it. 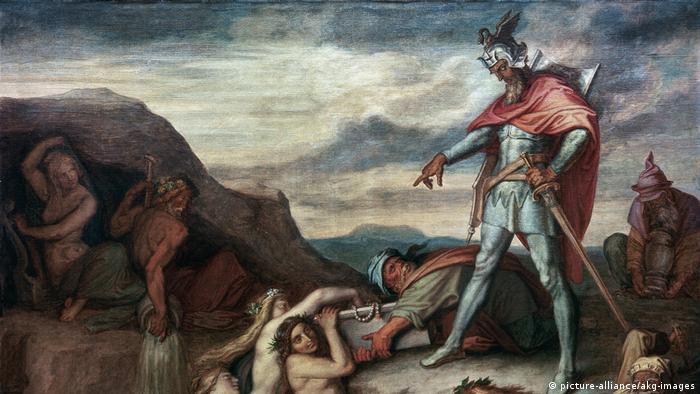 Does the treasure still lie on the Rhine's riverbed, where Hagen let it sink?

Next catch: Gunter has to consummate the marriage, but Brunhild, still unconvinced, doesn't make it easy. She not only keeps her newlywed husband at bay; she leaves him dangling from the wall all night, hung up by her belt. So who comes to the rescue in Gunther's hour of humiliation? Siegfried, of course. Invisible again, he overpowers Brunhild in the bridal chamber, lets her think that it's Gunther, and makes off with her belt and ring. (There are also variations to this part of the story, to which we need not go into further detail at this point.)

Those very personal items, belt and ring, end up in the possession of Siegfried's spouse Kriemhild. To demonstrate her higher social status, she brandishes them in full public display. The injury to Brunhild's pride could not be greater. It's an insult that can only be rectified by Siegfried's death. She hatches a plan with Hagen, and he does the deed. 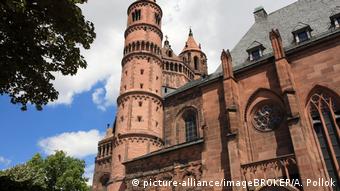 Scene of the argument: the Worms Cathedral, where Kriemhild confronts Brunhild with the truth

Kriemhild goes into mourning and swears revenge. And gets it 26 years later, at the court of her second husband Etzel (Attila) — though she herself is a victim of the ensuing melee that takes the lives of the entire Burgundian court and people.

Further ramifications of the tale will have to be explored another time. But one thing is clear: The Song of the Nibelungs is not for the faint of heart. And clearly anything but politically correct, particularly with regard to gender stereotypes.

But is the tale archetypically, paradigmatically, iconically German? Not necessarily: Homer's Ilias and many a Shakespearean play also generate more corpses than heroes.

The first commissioned work of new music in Bayreuth Festival history and the first world premiere there since 1882: the multimedia fairy tale "der verschwundene hochzeiter" (The Bridegroom Disappeared) by Klaus Lang.

Franco-Swiss film director Jean-Luc Godard was the most radical of the Nouvelle Vague filmmakers. He revolutionized French cinema, and refused honorary awards.