How the German media failed the victims of far-right NSU terror | Germany | News and in-depth reporting from Berlin and beyond | DW | 09.09.2020 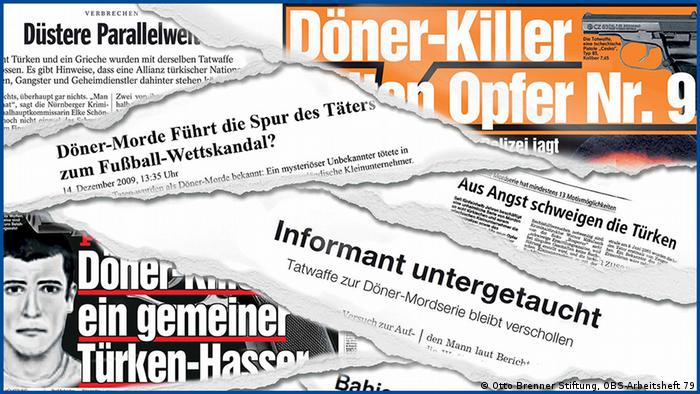 The police remained in the dark for 11 long years. Why did Enver Simsek have to die on September 11, 2000? Or Abdurrahim Özüdogru, on June 13, 2001? Or Süleyman Tasköprü on June 27, 2001? They were all shot with the same weapon. Six more men with Turkish or Greek roots were murdered in exactly the same way in a series of killings that went on until 2006.

Read more: What you need to know about Germany's Neo-Nazi terror group NSU

Yet initially, hardly anybody suspected a racist motive. The media, too, were blind to the possibility of far-right involvement. Right up to November 4, 2011, when the terrorist group "National Socialist Underground" (NSU) broke cover and released a macabre video bragging about its serial murders. The security authorities and the press were appalled — also by their own failure. How could this happen? How could investigations have focused almost exclusively on the victims' families and friends and the possible machinations of organized crime?

The inglorious role played by the police and domestic intelligence services was the subject of several parliamentary investigative committees. A study in 2015 by the Otto Brenner Foundation, a democracy-watchdog, cast the spotlight on the media and their reporting on the NSU murders. The diagnosis was catastrophic: "The media as a whole uncritically accepted police suspicions, with very few exceptions,"  Elke Grittmann, professor for media studies in Magdeburg and co-author of the study, told DW 20 years after the first NSU murder.

According to the study, most journalists and media outlets uncritically accepted and disseminated police speculation "which always tended towards organized crime and the criminalization of the victims." One unsavory aspect was the expression "Dönermorde" used in the German media in reference to the crimes, which translates roughly as "Kebab Murders," as some victims worked in popular Turkish fast-food restaurants.

This was an attempt by both the tabloid press and so-called "quality media" to condense the apparently incomprehensible events into a term. In fact, only two of the NSU's victims actually worked in a restaurant that sold kebabs. As the study says, this generalization "took away the victims' individualities."

Today's reporting is no longer so uniformly so insensitive when it comes to suspected or obvious racism. "The media have become more critical in their approach and ask more critical questions about police investigations," says media expert Elke Grittmann.

One example of a change in reporting is the coverage of the trial of the man accused of going on a murderous rampage in October 2019 in the eastern German city of Halle. Before randomly killing two bystanders, the suspect is alleged to have tried to carry out a massacre at the local synagogue. Elke Grittmann says journalists now look into "how the police treated the victims." This approach was never taken during the initial investigation into the NSU murders, says Grittmann.

Tanjev Schultz teaches journalism at Mainz University, he reported on the NSU trial for German national paper Süddeutsche Zeitung and published a book on the NSU in 2018.  Journalists now tend to "listen more closely to the victims and their relatives, are ready to question official statements and shine a brighter light on the workings of far-right extremists, than they did in the aftermath of the NSU murders," he told DW.

Read more: The legacy of the NSU crimes

Elke Grittmann agrees. In reporting on the events in Halle "those affected — the victims' families and friends — are being made visible and given an active, speaking role and are treated with greater empathy" than was the case with the victims of the NSU attacks, she says.

From 'kebab murders' to 'shisha murders'

But there have been relapses too, says Tanjev Schultz. He points to reporting on a racially motivated attack in Hanau in February 2020. A gunman with a far-right extremist and xenophobic mindset killed nine people, most of them with a migrant background, in several locations including a hookah bar ("Shisha bar" in German) before going home to kill his mother and then himself.

The whole event was referred to in German media as "shisha murders," Schultz pointed out, although the hookah bar had been only one of the locations.

Elke Grittmann urges more sensitivity in reporting. She says labels like "shisha murders" and "kebab murders" or references "parallel societies" in describing immigrant communities in Germany. This "dehumanizes" the victims and suggests that perpetrators and victims of crimes belong to the same group in society, which is not the case, she says.