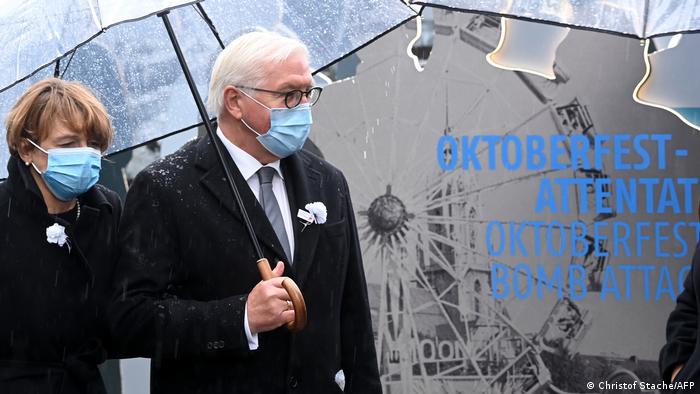 President Frank-Walter Steinmeier has reminded the country that far-right terrorism has been a threat to Germany for decades, in a speech marking the 1980 bombing of the Oktoberfest in Munich.

Thirteen people, including the attacker, were killed in what remains the deadliest terrorist attack in postwar Germany, when a homemade bomb was left in a garbage can near the entrance of the crowded festival. The blast left 213 people injured, and many of them had to have limbs amputated.

Speaking at the Saturday commemoration in Munich, Steinmeier said that in 1980, Germany had been united in its wish that such a tragedy should never be repeated.

"It was a wish that was not to be fulfilled," the president added.

Steinmeier pointed to murders carried out between 2000 and 2006 by the National Socialist Underground (NSU) and the deadly shootings in Halle and Hanauin recent months.

There have also been death threats sent by a group calling itself NSU 2.0, as well as "enemy lists" and weapons caches found among far-right prepper groups, who have been arming themselves to confront doomsday scenarios. Recently, far-right WhatsApp groups were uncovered among members of the police in North Rhine-Westphalia.

"Are far-right networks not taken seriously enough by criminal investigators?" Steinmeier asked, before adding there could only be two answers: Either the recognition of networks among violent extremists came too late, or they were "deliberately ignored."

The president also drew parallels with recent police failures and the investigation in 1980, which, he said, still left "many questions unanswered."

The original investigation concluded that there was no political motivation, and though connections between the attacker and the neo-Nazi organization the Wehrsportgruppe Hoffmann were known, no conclusive proof could be found that he had been supported.

The investigation was reopened by federal prosecutors in 2014 after new witness testimonies came to light saying that the attacker had been seen in conversation with other men half an hour before the explosion.

Though investigators finally concluded this year that the bombing had been act of far-right terrorism, no further suspects were found.

"Non-resolution, when a resolution could and should have been possible, is inexcusable and a failure that affects the trust in the investigative authorities and the judiciary," Steinmeier said.

The president also welcomed a decision made in July to create an additional compensation fund of €1.2 million ($1.4 million) for victims and their families.

Munich bans alcohol on Oktoberfest grounds due to coronavirus

The ban was put in place to prevent "replacement parties" for the event. This year marks the first cancellation of the world-famous folk festival since World War II.