Finding love during German reunification: My East-West relationship | Germany | News and in-depth reporting from Berlin and beyond | DW | 03.10.2020 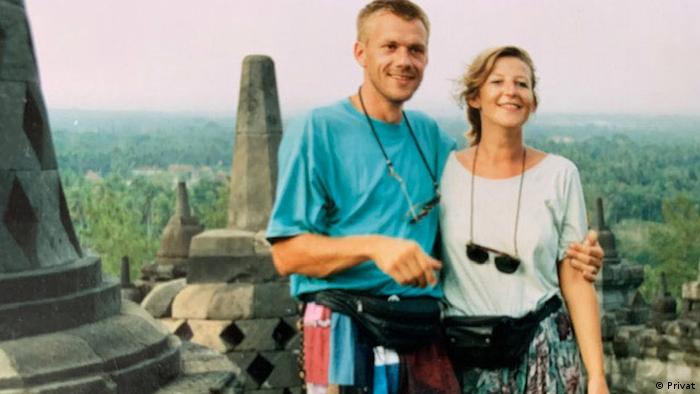 The man who would later become my husband, was on his first "trip to the West." In 1989, after the Berlin Wall fell, he and his friends wanted to spend New Year's Eve in the Westphalian city of Münster — one of their friends knew some people sharing an apartment there.

When we first met at their New Year's party, we shared a language, but the countries we were from — West Germany and East Germany — were foreign to the other person, and also didn't matter. A lot of younger Germans felt the way we did. My family didn't have any relatives in the East, so we didn't do things like place a candle in the window in memory of our "brothers and sisters in the East," as some did. And my future family from the East didn't have anyone in the West who would've been missing them. 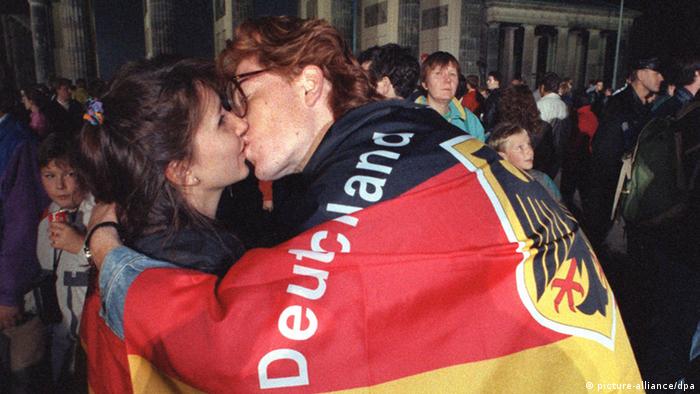 In today's terms, my husband and I had a high compatibility score: our record collections were nearly identical. Except that mine had clearly been more easy to put to together at a reasonable price.

We had a lot in common: our taste in decorating, cultural interests, social empathy. We also realized very quickly that we both had similar political views, from modern environmental policies to progressive family policies.

Read more: DW editor shares his memories of the night the Wall fell

We both saw the fall of the Berlin Wall as a great, democratic opportunity to reinvent our country: a reunified Germany. Full of hope, we followed the discussions of the various interest groups from the former East that were working on a new constitution. My husband was sick of the SED, East Germany's governing Socialist Unity Party, and I was sick of the conservative West German government of then-Chancellor Helmut Kohl.

At the beginning of 1990, people moved to the West by the thousands, especially young women. I, on the other hand, gave up my job and my apartment in the West and moved into my East German's two-bedroom apartment — which was actually illegal at the time since I, as a West German, wasn't allowed to just live unofficially in the GDR. 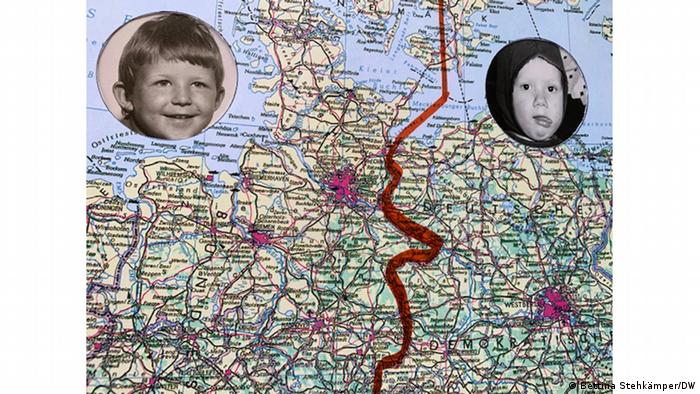 What is an East German?

It didn't take long for the media to catch wind of our unusual relationship, West German woman living with East German man. Inevitably, the same question came up in every interview: What is the essence of being East German, of being West German?

This question made us sweat every time. We never knew what to say. We fell in love over what we had in common, but after many an interview we got the feeling we needed to deliver the goods. So, we said the big difference was and remained the toilet paper preference: He preferred the hard, solid toilet paper from the East and I preferred the soft toilet paper from the West. Most of the journalists were satisfied with that explanation for the differing states of mind in a reunited Germany. Years later, our friends were disappointed to discover we only had one toilet paper dispenser.

But around us, the world had been turned upside down. Not far from us, the East Berlin neo-Nazi party "Nationale Alternative" was occupying several apartment buildings. I was stunned by the "Brown House" on Weitlingstrasse, brown being the color of Adolf Hitler's Nazi dictatorship. Nazis in the East!

Just a stone's throw away, West Berlin students were also occupying buildings on Mainzer Strasse. The two Germanys had only been united for a few weeks when, in November 1990, those apartments were cleared out in one of the most spectacular police raids in Germany's postwar history.

We were awoken by the sound of armored police vehicles. The old lady next door stood in the hall in her nightgown and cried, "We're at war!" 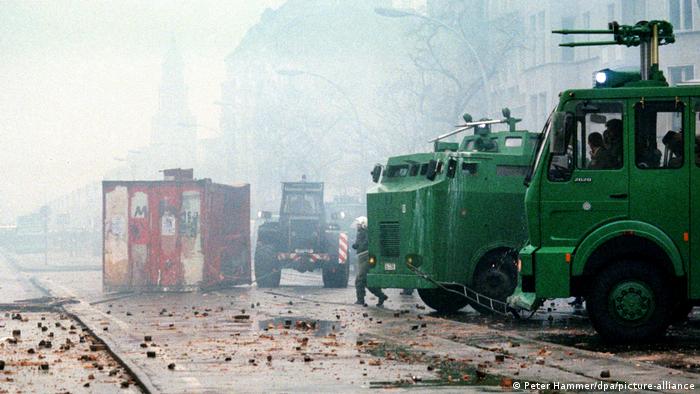 Squatters were forcefully evicted in East Berlin's Mainzer Street in 1990

Back then, trucks with Dutch number plates used to drive through our neighborhoods in the evening. Swift hands lifted the beautiful wooden railings and antique doorknobs from old buildings. You'd see them later at flea markets in Amsterdam or in Belgium being sold for a lot of money. It was as if everyone saw East Germany as something to loot. And that left the East Germans speechless.

In the summer of 1990, he took me to his favorite lake. We drove a small car there early in the morning, which had a license plate from a small West German town. When we tried to leave in the afternoon, there was a snazzy BMW with Munich plates blocking us in. A young couple holding hands and carrying their swim bags turned up hours later. When we complained about the nerve of their blocking my car, the man barked that the lakes had belonged to the East Germans long enough, they were taking them back. After that all I wanted to do was cry.

My in-laws also experienced things they never would've thought possible: People showing up unsolicited to their little weekend/summer house and measuring the property; unjustified accusations at the University of ties to the Stasi in order to end their scientific careers and give incompetent personnel from the West a job. And among their acquaintances, they witnessed how some of the staunchest supporters of the GDR suddenly became ardent supporters of reunification.

A question of background

In what was then still West Berlin, I found work very fast after moving. The news that I had an East Berlin address must've spread like wildfire and that I had to go through the checkpoint in the morning and in the evening.

One day a colleague patted me patronizingly on the shoulder, telling me, "You write really good stories for someone from East Germany."

When I asked him why he thought I was from the East, he said, completely convinced of his own instinct, "You can tell right away from your jeans and denim shirt."

Read more: In jeans and leather jackets — a generation finds freedom in 1989

My East German also found a job quickly at a Western German company. But before that, he had to become a citizen of the Federal Republic of Germany.

One morning he left our apartment in East Berlin as a citizen of the GDR and spent the day at the Marienfelde transit center. In the evening, he came back a West German. He struggled with the feeling of betrayal, not of the GDR but of those who still hoped to enter into a unified Germany with confidence.

Once at a company party, we were told how surprised they were that, of the two of us, I wasn't the one from the East.

"We would never have guessed. Your husband is so technically versed. And he can use a mobile telephone with no problem."

The East and West German family

There was only one time when our different backgrounds played a role, if I really had to say, and that was the first time we were pregnant. My mother-in-law bought a ton of things for the baby anywhere there was a special. We could've supplied an entire children's home. But what was behind it was living through an economy of scarcity in East Germany: If something's available, you buy it. Someone will be able to use it.

My mother, on the other hand, didn't talk to me for weeks. Her experience was that once a child is born, the woman's career is over. West German mothers, after all, knew a time when their husbands could forbid them from working. But that was different in East Germany.

Maybe that's why our children are so hopelessly blind to where people come from. Even in their early teens, they would still ask us which parent or which grandma was from the West and which from the East. To this day, there is no point in asking them about their friends' backgrounds. Peru, Portugal or Paderborn — they usually don't know.

End of the political europhoria

My husband and I spent October 3, 1990, with my in-laws and their friends. The mood was somber, we were all subdued from the shame we'd felt in the months before for our respective countrymen. Everything was about consumerism, titles, and "spoils of war." The former civil rights campaigners barely played a role anymore.

Those who doubted the wisdom of the reunification process were considered nostalgic for East Germany. Not one of us mourned East Germany on that day, only the missed opportunities.