Chancellor Merkel's CDU has released its plan for the future of Germany. The proposal includes stricter penalties for refugees who commit crimes, in the wake of a string of sexual crimes in the city of Cologne. 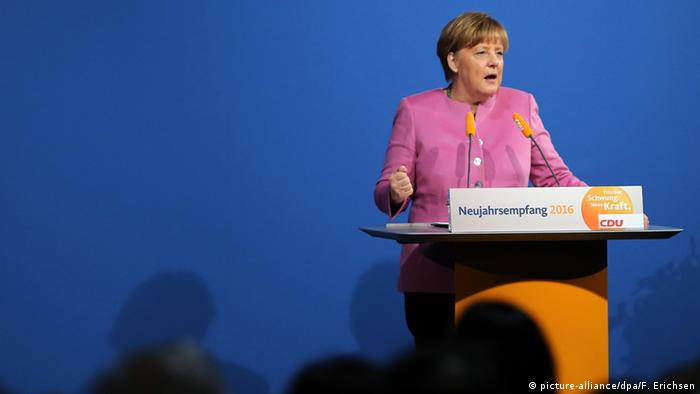 One of Germany's ruling parties, the Christian Democrats (CDU), moved toward a massive strengthening of asylum laws at a party meeting on Saturday. In response to the series of high-profile sexual assaults in the city of Cologne on New Year's Eve, Chancellor Angela Merkel's party has made expediting deportation for asylum seekers who commit crimes an important facet of their new 10-point plan for the nation's future.

The CDU and Chancellor Merkel have been criticized for their open-door refugee policy after a group of some 1,000 men, most of whom were reported to look Arab or North African, gathered in the city's main square on New Year's Eve, leading to over 100 reports of sexual violence.

The events have shocked Germany and cast doubts on the reliability of city officials and police, prompting a series of protests for better security and respect for the rights of women.

Meeting in the western city of Mainz, the CDU's draft plan includes a new law that would strip refugees of asylum status after committing a single crime. The move is likely a direct response to reports that some of the men arrested by Cologne police in connection with the assaults were in fact asylum seekers, a fact initially kept in the dark because it was deemed "politically awkward."

The proposals also include speeding up the deportation process for migrants convicted of crimes, even with a suspended sentence, bypassing old laws that can slow down the process and allow the individual to remain in Germany.

Besides laws, the "Mainzer Erklärung" (the Mainz Declaration) calls for increased security at hotspots of criminality like the Cologne train station, where many of the assaults took place, for example, more video cameras and random checks on individuals by security personnel.

After months of insisting that the solution to the refugee crisis must come from a higher level, the CDU's paper calls for a clear reduction in the number of migrants entering the country. Eschewing the suggestion from Bavarian sister party the CSU to construct a fence on the border with Austria, the Mainz Declaration instead suggests better security at the European Union's outer borders.

It further renews the German call for the redistribution of refugees across the bloc, a plan smaller eastern members have patently refused.

Robert Fico has called for an extraordinary EU summit to tackle the growing influx of migrants across Europe's borders. His proposal follows the sexual assaults in Cologne and elsewhere on New Year's Eve. (08.01.2016)

Angela Merkel's office seems to have dropped its objections to a legal amendment that would widen Germany's definition of rape. Until now sexual assault has often not been prosecuted if the victim failed to fight back. (08.01.2016)