German rocker Peter Maffay has campaigned for many years on behalf of traumatized children and social inclusion. DW accompanied the activist and musician on one of his visits to the land of his birth, Romania. 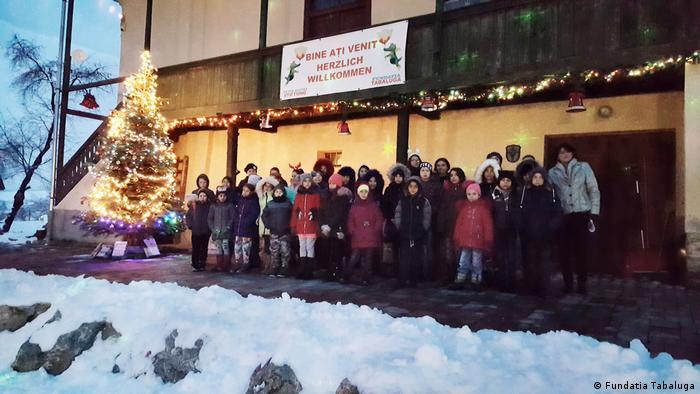 It's Christmastime in Radeln, a village in Transylvania, the heart of Romania, far removed from the hustle and bustle of urban life. Children and young people have been entertaining their families and friends with a magical Christmas celebration in the courtyard of Tabaluga House, a Peter Maffay Foundation project. It's a festive end to a successful year for the foundation.

Radeln — also known by its Romanian name, Roades — was founded by German immigrants, the Transylvanian Saxons, in the Middle Ages. The village is deep in the hilly Haferland region, between the better-known towns of Brasov (Kronstadt to German speakers) and Sibiu (Hermannstadt). Migration, unemployment, poverty, and poor infrastructure have made life very difficult for the people who live here.

A safe space for children

Nine years ago, the famous German musician Peter Maffay started a project, the initial intention of which was to create a safe space for "children who haven't always been fortunate in life," as he likes to stress. The meeting place for traumatized and socially disadvantaged children is now just one part of a larger-scale infrastructure project in the village.

This includes an organic farm, water supply for the whole village, a practice for general medicine and dentistry, and a small sports and fitness center that children and young people can use for free. Next up for construction is a sewage system. A particularly important aspect of the foundation's projects is that they have created jobs.

There have, however, also been a number of critical reports about the foundation's activities in the past. Among other things, an employee was accused of racially abusing and threatening some local people from the Roma minority. The employee himself strongly rejected the accusations. For Peter Maffay, who has long been an active opponent of discrimination, the case sounded an alarm bell and had to be taken seriously. The musician says he conducted conversations with a lot of people in the village, and after talking to them he was persuaded that the accusations were groundless.

A village, not an idyll

Late autumn in Transylvania. We're accompanying Peter Maffay on one of his visits to Radeln. A gorgeous Indian summer has transformed the hilly landscape into something from a fairy tale. The last of the pumpkins are being harvested; cows are being brought down from the pasture. The once potholed road to the village has been paved; many of the old farmhouses have been renovated; children are playing football in a little meadow. A peasant woman waves to us. We wave back, and stop. Aunt Flori approaches, and when she sees Peter Maffay behind the wheel of the SUV she breaks into a wide smile.

We get out. "Domnu' Peter" — Mr. Peter — gets a big hug, and some of her Romanian warmth is extended to us, too. "Without him the village would have fallen apart. We wouldn't be here any more," she says. It's "un mare noroc" — a great good fortune — that we have him, Tante Flori says, before hurrying on her way: Today is baking day!

300 people still live in Radeln; most of them are Roma. Coexistence with the few Romanian families and remaining Transylvanian Saxons and Hungarians is not always conflict-free. Maffay saw this as a challenge. "This is why we said to ourselves: It's precisely in situations as ethnically charged as the one in Radeln and the surrounding villages that we can, perhaps, make a small contribution to improving the infrastructure, to facilitating an exchange between young people," Maffay told DW. He added that the idea was to enable young people, who represent "our society's prospects," to learn to evaluate each other differently. 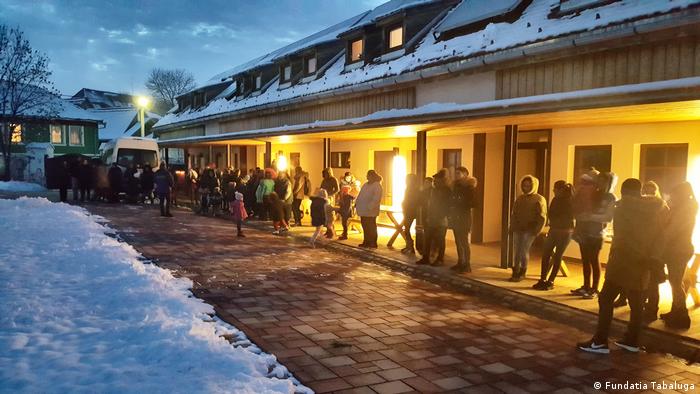 A future for the Roma

One of the foundation's youngest employees is Florian Fekete, a social education worker and mediator. He's only been working there for a few months, but he was immediately convinced of the impact the foundation is having. "It's a positive development that's making a decisive overall contribution, improving living conditions for the Roma minority and their inclusion in majority society in Romania," Fekete told DW.

He admits that there are also people who remain hostile, who see everything from a conservative point of view, and with suspicion. But "sooner or later conditions will improve, so everyone will be able to see the results of the work these foundations and organizations do," the young social worker says.

Read more: Romania's ethnic Germans get their day in the spotlight

Fabritius, who was born and grew up in Transylvania, says that he naturally also made use of his visits to Radeln to get to the bottom of the critical reports about the foundation. But when he spoke to representatives of the Roma minority, they painted a completely different picture, "of a foundation that does a great deal of good." Rumors had been spread by a family that felt slighted, he says; Maffay shouldn't take them seriously. "It's a non-objective development, a single case that should not be allowed to jeopardize the project as a whole," says Fabritius.

In our conversations with the villagers, whether outside on the street or in their own homes, in front of the village pub or on the farm, it was very apparent that they are grateful for the foundation's projects. "Domnu' Peter" sees this as a clear signal to maintain his commitment to his former homeland. "We want to continue our modest contribution in Radeln, to improve mutual understanding," he says.

Romanian officials have reacted angrily following a German media report on their country's union with Transylvania in 1918. The article mentioned an "Anschluss," which has the connotation of forced annexation. (05.12.2018)

Just as Romania is set to take over the presidency of the Council of the EU, the government in Bucharest has shown its true colors. The Communist Party, presumed dead, is actually alive and well, writes Robert Schwartz. (17.12.2018)

Bees dying off in Romania