Björn Höcke said he would "like to apologize" for criticizing Germany's culture of Holocaust remembrance. Leaders of his Alternative for Germany party have called for his ouster. 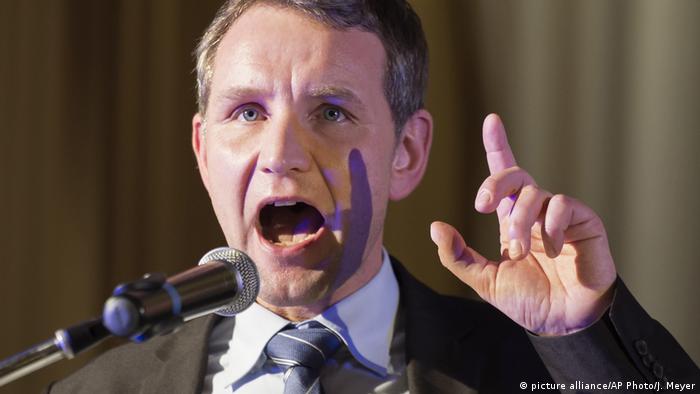 Right-wing politician Björn Höcke backpedaled on his controversial statements about German Holocaust memorials. Speaking at a state meeting of his Alternative for Germany (AfD) party on Saturday, Höcke said he had made a "mistake" and taken the wrong tone with what is a very serious subject.

The Maritim Hotel in Cologne is under fire for agreeing to host an event for the controversial anti-immigrant party Alternative for Germany. And the backlash is only growing stronger. (14.02.2017)

The leaders of Germany's nationalist AfD have asked that Thuringia state party leader Björn Höcke be removed from his position. Höcke caused a stir for his harsh criticism of Germany's culture of Holocaust remembrance. (13.02.2017)

Björn Höcke has been told to stay away from his state parliament’s remembrance ceremony for victims of the Nazi regime after a speech last week in which he called the Holocaust memorial in Berlin a "monument of shame." (27.01.2017)

"I took a big, important topic and unfortunately turned it into beer hall talk," said Höcke at the meeting in Arnstadt, Thuringia, in the east of Germany. "That was a mistake. For that, I would like to apologize here."

Höcke is the leader of the AfD in the federal state of Thuringia and one of the more conservative members of Germany's far-right political party. No stranger to controversy for his strong stance on border control and euroskepticism, Höcke sparked a nationwide outcry in January when he criticized Germany's strong culture of Holocaust remembrance.

"These stupid politics of coming to grips with the past cripple us - we need nothing other than a 180-degree reversal on the politics of remembrance," Höcke told members of the AfD youth wing at a January event in Dresden.

Referring to the Memorial to the Murdered Jews of Europe in Berlin, he said: "We Germans, that is to say, our people, are the only people in the world who planted a monument of shame in the heart of their capital."

After initially standing behind Höcke, last week the AfD announced it had asked the regional party leadership in Thuringia to expel him from the party. National AfD leader Frauke Petry called him a "burden" and slammed his comments as "unauthorized solo actions."

Höcke is now awaiting an arbitration panel of the AfD Thuringia to decide on whether he will be permanently ousted from the party. In the meantime, Höcke has said he will not be a liability for the party because he has no aspirations to run for the Bundestag in September's federal elections.

As he spoke at the party meeting in Arnstadt on Saturday, he appeared to have no fear of dismissal. "I promise you, I have no intention of leaving the AfD," he told the group, who responded with cheers of "Höcke, Höcke."