German press review: Pirate Party profits the most in ideological ′wasteland′ | Germany| News and in-depth reporting from Berlin and beyond | DW | 19.09.2011

Berlin's regional elections on Sunday represent a blow to the city's political establishment, according to the editorial pages of many German newspapers. Only the unorthodox Pirate Party could claim a victory. 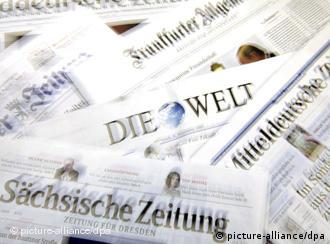 Opinion leaders believe the establishment is in trouble

The German press saw Sunday's regional elections in Berlin as a blow to the city's political establishment, with only the nonconformist Pirate Party able to claim a decisive victory.

Although Social Democrat Mayor Klaus Wowereit managed to retain power in traditionally leftist Berlin, the daily Frankfurter Allgemeine Zeitung writes that his victory had "little to do with himself or his own party." Wowereit only found his "fighting spirit" when it became clear that the environment-focused Greens would give him a run for his money after their historic victory in the southern German state of Baden-Württemberg in March, according to the paper. Whether or not the Social Democrats are "capable of giving a new impulse to the highly indebted city with Germany's worst education system is more uncertain than ever."

The Greens did indeed have their best performance ever in Berlin with more than 17 percent of the vote, but according to the daily Tagesspiegel "they still felt like losers." Mayoral candidate Renate Künast "started too early and was already tired" when incumbent Wowereit kicked off his campaign, and the more the once anti-establishment Greens discussed a possible coalition with the conservative Christian Democrats, the more traditional supporters abandoned them. The Greens learned that "protest sentiment against the established political class can also turn against them." 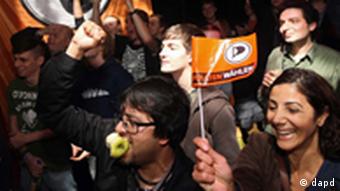 The Pirate Party was the only clear winner on Sunday

The established political class received another shock when Berlin's citizens ejected the economically liberal Free Democrats (FDP) from parliament with 1.8 percent of the vote. Bonn's daily General-Anzeiger asks what the party's future is given the bleak reality that they are no longer represented in five of Germany's 16 regional parliaments. "This threatens - despite all the denial - the existence of the conservative-liberal governing coalition" led by Chancellor Angela Merkel and FDP-chief Philipp Rösler.

Despite the fact that Merkel's conservative Christian Democrats managed a "respectable result in Berlin" of 23 percent support with their candidate Klaus Henkel at the helm, the daily Mittelbayerische Zeitung writes that the "divide within the governing coalition has become broader and deeper." In "despair," FDP-chief Rösler has struck a euroskeptic course as of late in a failed bid to save his tanking party, which only threatens "to tear the conservative-liberal government to pieces."

Yet it was the socialist Left party that had the most on the line during Berlin's elections, according to the daily Neue Osnabrücker Zeitung. The fact that the party managed to bring in just 11.6 percent of the vote means they will no longer be able to govern with the Social Democrats, raising questions about their controversial and "hapless chairmanship and the very future of the party."

The technology-focused Pirate Party profited the most from the ideological "wasteland" offered by the large established brands, writes the daily Rhein Zeitung. "If the situation wasn't so serious, one might be able to book the Pirate Party's success as a Berlin specialty." But in reality, their victory is "equivalent to a mockery of the established parties."

According to exit polls, Social Democrats in Berlin have held on to power in the regional government, while the Free Democrats fail to gain representation at all. Instead, Berlin welcomes the Pirate Party to parliament. (18.09.2011)

After state elections in Mecklenburg-Western Pomerania on Sunday dealt Chancellor Angela Merkel's Christian Democrats (CDU) another blow in local elections, the German press set out to analyze what the results mean. (05.09.2011)