Berlin′s new Pirate Party might be here to stay | Germany| News and in-depth reporting from Berlin and beyond | DW | 18.09.2011

After state elections in Berlin, the Pirate Party has gained representation in a German state parliament for the first time. But what is the Pirate Party, and what does it stand for? 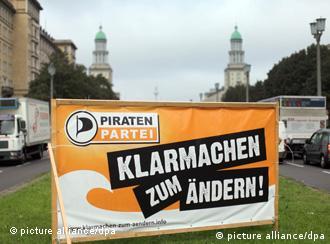 The party's campaign in Berlin was a success

The Pirate Party in German was established five years ago and has since grown to 13,000 members nation-wide. The biggest boost to the party's popularity came in 2009 during a political debate about blocking child pornography on the Internet. Many saw the idea of blocking such sites as censorship of the Internet, and feared that it could set a precedent for blocking other sites.

The conflict provided a spark to the party's popularity, much as a similar debate resonated with voters in Sweden when the original Pirate Party was created.

In that case, members of the Pirate Party argued that not everyone who downloaded music and movies from the internet platform 'Pirate Bay' should be considered a criminal. Pirates world-wide argued that the new paradigm is access, and not possession.

In Germany, part of what sets the Pirate Party apart is their familiarity to the online world, which they say is lacking among the established parties. This is one reason in particular why the Pirate Party is especially popular among younger voters.

Political scientist Oscar Niedermeyer says that while there are members of the established parties that know their way around the Internet, they haven't quite got it completely down.

"There are many people in these parties that attempt to use this medium but who haven't really mastered it," he said.

Christoph Lauer, one of the Pirate Party's top officials in Berlin, says there is a "good amount of ineptitude among the established parties" when it comes to the online world.

"We know our way around much better," he said.

Lauer adds that in general, the time is right for a new party in Germany.

"There is a new generation on their way toward changing the political system," he said. "In my opinion, that's a natural process that repeats itself every 20 or 30 years."

One of the main tenets of the Pirate Party is the attempt to establish more transparent politics. Andreas Baum, the party's top candidate in Berlin, says citizens should have a say in shaping their government in ways they aren't used to. 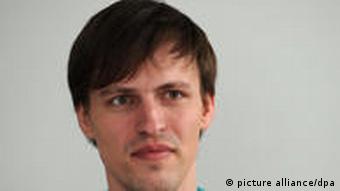 Baum is the party's top candidate of the Berlin vote

"[It should be] different than it has been, and supported by new tools in the Internet," he said.

Baum adds that, for example, citizens' initiatives often fail to achieve real results and are frustrated when a group of people comes together and takes a position, only to have that position ignored when it reaches the upper echelons of government.

Christoph Lauer even goes so far as to say street protests are wasted energy.

"These efforts by citizens need to be used more constructively," he said. 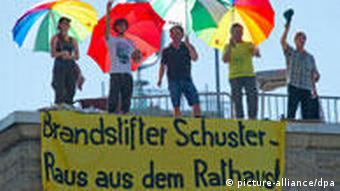 Lauer adds that thanks to the Internet, young people are used having their questions answered with little turn-around time. Politics as it stands, he says, lacks this feedback, and functions in an unsatisfactory way for many people.

This is part of the reason the Pirate Party is gaining in popularity, says political analyst Karl-Rudolf Korte. People who vote for the Pirates often do so in protest.

"They articulate this protest by giving a party that doesn't come across as part of the establishment their vote," Korte said.

The right to Internet

In the Berlin elections, the Pirate Party presented itself as a social party, calling for access to education, knowledge, and participation in public life in the city. This applies to everyone, no matter their social situation. For the Pirates, the subway should be free, as well as Internet access in a city-wide wireless network. The guiding principle of the Internet - the free flow of information - is to be applied to real life in the city.

But it isn't just about opening citizens up to an online world - the Pirate Party is also for raising awareness about the risks and dangers of life online.

Now that the Berlin elections are over and the Pirate Party has gained enough support to enter Berlin's parliament, they will be faced with the challenge of walking the talk.

It won't, however, be the first time. Some members of the Pirate Party are already involved in local governments. So far, they have survived these trials by fire, which could be an indication that their popularity will only continue to grow.