German President Frank-Walter Steinmeier has arrived in Israel for a four-day official visit. The trip comes as relations between the two nations have gone icy. 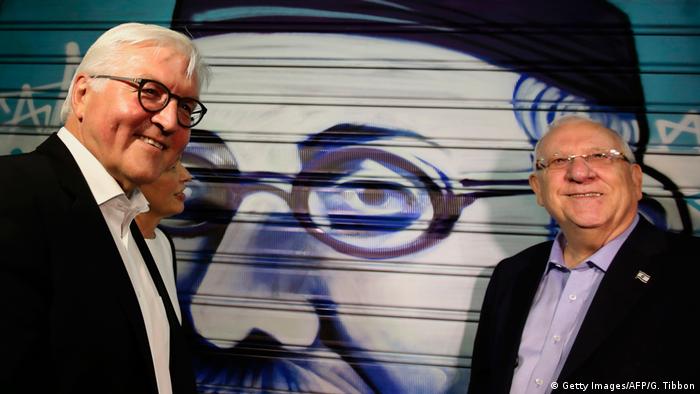 Steinmeier and Rivlin visit a graffiti art exhibition in Jerusalem.

German President Frank-Walter Steinmeier kicked off a four-day visit to Israel on Saturday, informally sitting down with his counterpart Reuven Rivlin over beer and food at a Jerusalem market.

Steinmeier is scheduled to have a joint meeting with Israeli Prime Minister Benjamin Netanyahu and Rivlin on Sunday, as well as visit the Yad Vashem World Holocaust Remembrance Center and give a speech at the Hebrew University

On Monday, he is to meet with Palestinian President Mahmoud Abbas in the West Bank city of Ramallah and visit German-funded develop projects.

Steinmeier is travelling with his wife, Elke Büdenbender. It is his first visit to Israel as president, although he made 11 trips before his appointment, while serving as foreign minister.

Netanyahu, who is also Israel's foreign minister, cancelled a meeting with German foreign minister Sigmar Gabriel on April 25, causing a diplomatic spat which both sides later sought to downplay as not impacting ties.

Gabriel had met with representatives from Breaking the Silence, a group which documents testimony from ex-Israeli soldiers about alleged abuses committed against Palestinians, and B'Tselem, a prominent NGO that records human rights abuses and Jewish settlement building in Palestinian territories.

Netanyahu had warned Gabriel against meeting with what he described as "radical fringe groups," and subsequently canceled scheduled talks with the minister, calling his behavior "tactless."

Gabriel insisted it was "completely normal" for a visiting diplomat to meet with local organizations in order to get a better picture of the country. Echoing the view of many analysts, he also attributed the snub to Netanyahu's playing to right-wing groups to win domestic political points.

Gabriel later said in an interview that he did not regret the meeting with the groups and that, given the chance, he would do it again.

"Democrats should also be able to meet with organizations that are critical of the government," Gabriel told the German mass-market daily newspaper "Bild."

Last year, Israel passed a controversial law imposing reporting requirements on NGOs that received more than half their funding from foreign governments.

There are no plans for Steinmeier to meet with Breaking the Silence and B'Tselem, but his office said he would meet with civil society representatives.

A statement from Steinmeier's office said that the president did not wish to increase the gulf in bilateral relations, but stressed that he also wished to express Germany's concerns over Israel's ongoing settlement policy.

Israeli settlements are illegal under international law and viewed as a stumbling block for a peace agreement because they are built on land Palestinians claim for a future state.

German President Frank-Walter Steinmeier paid tribute to outgoing Israeli President Reuven Rivlin during the second day of his trip to Israel. He also met with the leaders of Israel's new government.

On the final day of his visit to Israel, the German president said he is confident that Israel's new eight-party coalition will be able to work together, despite the political and cultural challenges.