Benjamin Netanyahu has made good on a promise to cancel talks with the German foreign minister if he met with human rights groups during his trip to Israel. The PM has criticized the organizations for being anti-Israel. 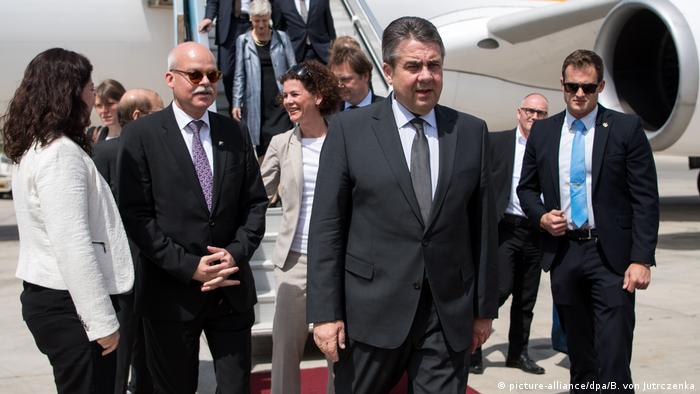 The move came a day after Netanyahu, who is also foreign minister, warned Gabriel against meeting with two human rights groups critical of settlements and the Israeli military's treatment of Palestinians in the occupied West Bank.

"My policy is clear: Not to meet with diplomats who visit Israel and engage with organizations that slander Israeli soldiers and seek to have them put on trial as war criminals," Netanyahu said in Jerusalem late on Tuesday.

Gabriel said it was regrettable Netanyahu canceled over his meeting with the NGOs "Breaking the Silence" and B'Tselem.

"I regret it greatly. And, I'll say it openly, we cannot become a political football for Israeli domestic politics," he said. "But it's not a catastrophe. There will be another occasion to meet somewhere ... We have to let things cool off."

B'Tselem is a prominent NGO that records human rights abuses and Jewish settlement building in Palestinian territories. "Breaking the Silence" documents testimony from ex-Israeli soldiers about abuses committed against Palestinians.

Israel's right-wing government criticizes both organizations for being anti-Israel. It also dislikes that some critical NGOs received funds from EU countries. Last year, Israel passed a controversial law imposing reporting requirements on NGOs that received more than half their funding from foreign governments.

Gabriel insisted it was "completely normal" for a visiting diplomat to meet with local organizations in order to get a better picture of the country.

The prime minister's decision to cancel the meeting was criticized by Israel's liberal opposition, but backed by the right-wing and Netanyahu's allies.

In Berlin, the chairman of the German-Israeli parliamentary group, Volker Beck, slammed the prime minister for presuming to dictate who a German diplomat in Israel could speak with.

However, both Netanyahu and Gabriel said relations between Germany and Israel would remain strong.

"You can absolutely be sure we are committed to the friendship, the partnership and the special relationship with Israel and nothing will change this," Gabriel said.

Breaking the Silence did not issue a statement on the meeting with the German foreign minister.

Without referring to meeting Gabriel, B'Tselem said in a statement that "firm determination and resolve by the international community" is necessary to end Israeli occupation and policies in Palestinian territories.

In Berlin, the chairman of the German-Israeli parliamentary group, Volker Beck, slammed the prime minister for presuming to dictate who a German diplomat in Israel could speak with.

The row followed one day after Yom HaShoah, Israel's Holocaust Remembrance Day, when Gabriel attended a wreath-laying ceremony at the Yad Vashem memorial alongside Netanyahu.

Relations between Germany and Israel have been strained recently as Netanyahu's government moves forward with settlement building in the West Bank and East Jerusalem.

Germany has criticized Israel for hindering a two-state solution.

Israel Prime Minister Benjamin Netanyahu joined the rest of his country in remembering victims of the genocide. The ceremonies will last until Monday evening. (24.04.2017)