German President Frank-Walter Steinmeier leaves for Ethiopia on Sunday. He takes with him his government's backing for Abiy Ahmed's reform program. In an interview with DW, Steinmeier talks about his plans for his visit. 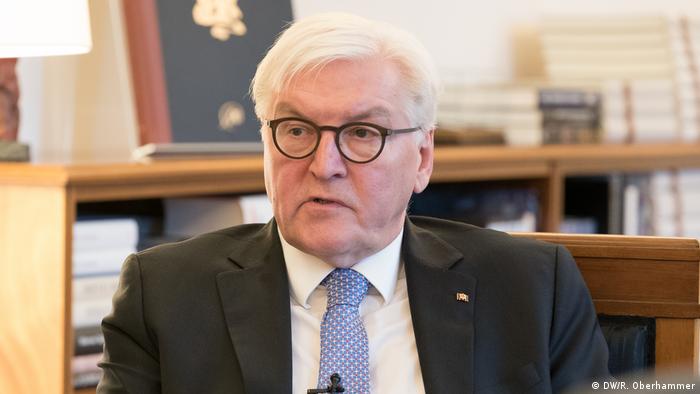 On Wednesday, Steinmeier will meet with Moussa Faki Mahamat, the chairperson of the African Union, which is headquartered in the Ethiopian capital, Addis Ababa.

DW: This is your third trip to Africa as German president – you have previously visited Ghana, Gambia, South Africa and Botswana. How do you see Ethiopia? Similar to Gambia, which is also experiencing surprising democratic change?

President Steinmeier: It is different because it won't be my first visit to Ethiopia [having visited the country in 2014 as Germany's foreign minister]. I am somewhat familiar with the country although, of course, it was another time and under different political conditions.

In the past short year, Ethiopia's people have witnessed breathtaking transformation – changes and reform efforts introduced by the new leadership that have led to a new dynamic of change. That's why I very quickly said 'yes' to the invitation by President Sahle-Work Zewde and Prime Minister Abiy Ahmed. It's crucial not only to honor from afar the courage of these changes in favor of democracy, but – as a European and German – to also be there on the ground to encourage the journey along this path. That's why it's the right time for me to visit Ethiopia. 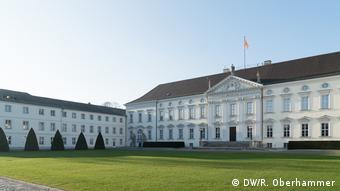 The interview took place in the Bellevue Palace in Berlin, the official residence of the German federal president

As German president, you are returning to a 'new Ethiopia.' Currently, however, there are serious concerns about numerous ethnic conflicts flaring up. Multiethnic Ethiopia is now facing a serious stress test. Will you raise concerns about this with President Sahle-Work Zewde and Prime Minister Abiy?

We are coming with great curiosity but we are not naive. Because we recognize what challenges the prime minister and the president have faced: making peace with neighboring Eritrea, the archenemy, opening borders that have been closed for decades, decriminalizing being in opposition, releasing political prisoners, planning legislative reform to change laws used to harass the civilian population, and, an equally courageous step, cutting the numbers of positions in the Cabinet and populating it equally with men and women. These are quite revolutionary decisions for Africa.

And, of course, these changes aren't the end of the process. It requires perseverance to create successful change in such a large country that is still marked by old rivalries and where divisions have yet to be reconciled. It requires people to be patient – it needs time before the process bears fruit for everyone. I hope the population is patient and I hope the political leadership maintains its perseverance.

Prime Minister Abiy is the symbol of Ethiopia's democratic change. Many Ethiopians express concern that such huge expectations are concentrated in a single person. Instead, they call for the strengthening of institutions and – given Ethiopia is a federal state – the regions. With Germany also having a federal constitution, what experiences can Germany, as a long-term partner, bring Ethiopia?

In Europe and in Germany, we understand the differences between reform efforts and harvesting the fruits of the reforms. That's why we shouldn't restrict ourselves to observing from a distance. If we believe [Abiy's] way is the right way, then we should support him. If Germany, as an economically strong country in Europe, wants to provide support, then this can be achieved through political cooperation, through consultations such as institution building. But, of course, the country also needs economic stimuli. This is why I'm traveling with a business delegation, with companies I know have a real interest in Ethiopia. And I hope this also helps Prime Minister Abiy in the course he is taking. 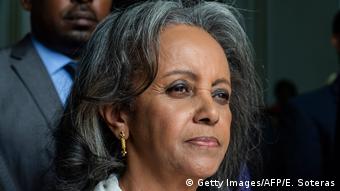 Speaking of German commitment, last week the German parliament, the Bundestag, appealed to the German government to increase its involvement in the peace process between Ethiopia and Eritrea. Many voices – among them Africans – believe Germany could play a substantially larger role in Africa. Why can't we rise to meet these expectations? Why do we often fall short in meeting African expectations?

I don't think that we are falling short of expectations. The path Ethiopia is now taking deserves support. It is up to the Ethiopian leadership to assess whether we can also provide, for example, regional support in terms of lasting peace in the Horn of Africa and the relationship between Ethiopia and Eritrea. And the leadership needs to signal what kind of support it would like to have for one or the other of these processes. I can't imagine there will be a lack of readiness on the German side.

During your visit, you will also hold talks with the African Union (AU). Germany has been supporting the AU's Peace and Security Council for many years. Nevertheless, critics say member states act in solidarity with each other when it comes to human rights and electoral fraud – something seen most recently in the Democratic Republic of Congo. The organization also faces criticism for the pace of reform and its fiscal discipline. Are these topics all on your list for when you talk to AU Chairman Moussa Faki?

The same applies to the African Union as it does to the European Union – the institution is only as strong as the members make it. For this reason, in the past I have understood the criticism of the African Union, but I also said that the African Union can't move things in the right direction in African nations if its members haven't given it the appropriate authority. Nevertheless, there have been developments in the AU that I value and acknowledge and I hope there will be no setbacks – especially in foreign and security policy. In peacekeeping matters, the AU has become much more effective than it was 10 or 20 years ago.

In recent years, there has been much discussion of Africa being a continent of possibilities. Last year, Germany hosted the G20 Africa Conference and there are various Africa initiatives such as the Compact with Africa. But at the same time, issues such as electoral fraud in Congo, civil war in South Sudan and migration dominate the public's perception of Africa. When will we really see Africa on equal terms, as is often avowed? 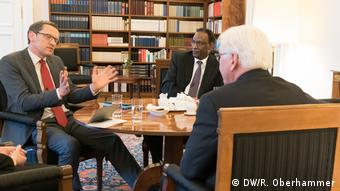 That isn't something you can order. You can only try to do your part to make the European understanding of Africa more enlightened. This includes clarifying the concept of 'Africa.' There is not one Africa, there are various Africas. In addition, Europe should be more present and should – with an emphasis on meeting as equals – look for cooperation opportunities in which the other party feels recognized as a valued partner. In some areas, we are successful in this but unfortunately not in others. And I hope that the desire and determination grows in many African countries to look confidently and less accusingly at the moves by European states to come closer. Having a relationship on equal terms – to communicate with each other – is a two-way process but one to which Europeans need to make a greater contribution.

Eritrea is bordered by Ethiopia to the south, where Tigrayan forces have been locked in conflict with government forces since 2020.