German population with immigrant background reaches new peak in 2017 | Germany | News and in-depth reporting from Berlin and beyond | DW | 01.08.2018

According to the latest "micro-census," the number of people in Germany with immigrant roots rose to 19.3 million last year. Although society is becoming more diverse, many have argued that it's not become more open. 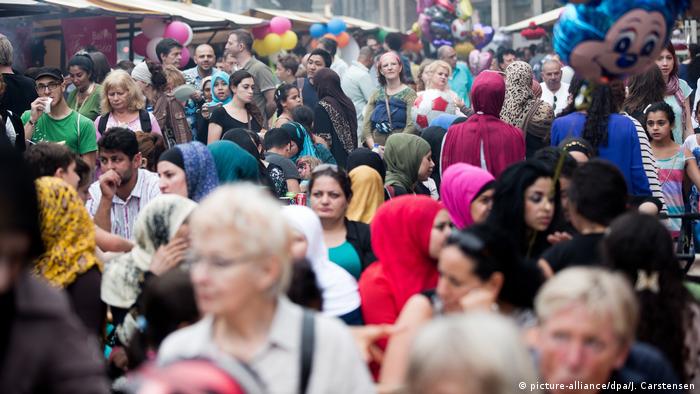 The number of people with foreign roots living in Germany reached a new peak last year, according to the results of a "micro-census" that was published on Wednesday.

According to Destatis, Germany's Federal Office for Statistics, around 19.3 million people living in Germany have immigrant backgrounds. The figure increased 4.4 percent compared to the figures from the 2016 "micro-census."

Destatis defines someone with a "migrant background" as a person who was not born in Germany or who has at least one parent who is not a German citizen.

The data also found among those with immigrant backgrounds, 51 percent were German citizens and 49 percent were foreigners.

The annual "micro-census" derives its data from a 1 percent sample of the German population and focuses on people living in private households. Destatis has said that the data on those living in shared accommodation such as asylum-seeker homes and migrant reception centers is likely underrepresented in the study.

For the first time, Destatis also asked about what languages are most often spoken at home. They found that out of the 24 million households with more than one person, foreign languages are primarily spoken in 2.5 million of them.

Out of those with foreign backgrounds, 13.2 million of them had immigrated to Germany themselves. When asked about their motives for immigrating to Germany, family reasons were the most important factor listed by participants.

Germany in the age of #MeTwo

The data shows that not only is German society becoming more diverse, the majority of people with foreign roots are German citizens.

Although diversity may be on the rise, fierce debates continue to flare up in Germany about integration and discrimination.

Recently, numerous immigrants and Germans with immigrant backgrounds have been sharing stories about everyday racism they've faced under the hashtag #MeTwo.

The movement was launched after footballer Mesut Özil announced he was leaving the German national team, citing racism as among the reasons for his decision.

Many online have sympathized with Özil's frustration over his treatment as a person with Turkish roots in Germany.

"I was born and educated in Germany, so why don't people accept that I am German?" he said.

Polls say that migrants aren't what Germans are most concerned about. So why do the media and politicians push the topic so much? Is the AfD profiting from their mistakes? DW's Jefferson Chase takes a self-critical look. (21.07.2018)

New figures show that every fifth person in Germany has an immigrant background. The number of people without foreign origins has declined slightly, while that of immigrants from within the EU has grown. (03.08.2015)