Now that the US request for Germany to accept as many as 17 Uighur detainees from Guantanamo Bay is official, reaction from across the political spetrum has been mixed. 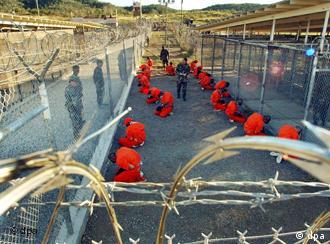 Talks about what to do with the Guantanamo Uighurs are ongoing

German Chancellor Angela Merkel has said that Germany has an obligation to help US President Barack Obama in his efforts to close the American military prison camp at Guantanamo Bay, Cuba. But reservations about accepting former detainees have been expressed, even from within her own Christian Democratic Union party.

Members of the CDU's Bavaria-based sister party, the Christian Social Union, have also voiced concerns. Senior CSU politician Peter Ramsauer said on Tuesday in Berlin that Germany is neither politically nor legally bound to take in the prisoners. "We are not ready to either help or support the government on this issue," he said.

On Tuesday, Saxony-Anhalt Interior Minister Holger Hoevelman from the CDU's coalition partners, the Social Democrats, told the Frankfurter Rundschau newspaper that the detainees were an American problem. He had "no interest in adding a potential risk to the country by taking in the prisoners," he said.

In support of the resettlement efforts, German government spokesman Ulrich Wilhelm noted that Munich would be the appropriate location to resettle the prisoners as there is a large Uighur community there, and that the city council had voted to accept the Uighurs back in February.

In contrast, Bavarian Interior Minister Joachim Herrmann (CSU) said on Monday that his state would not offer to welcome the detainees.

The Uighurs are a Chinese Muslim minority from the remote northwestern province of Xinjiang. The Obama administration says that the Uighurs cannot return to China because they risk persecution as the Chinese government regards them as terrorists.

The US government has classified the Uighurs as not posing a security threat.

US asks Germany to take in released Guantanamo inmates

Germany has officially been asked to be the new home for up to 10 Guantanamo Bay inmates after the prison is closed next year, however the government will make a case-by case decision. (03.05.2009)

Germans applaud Obama as he marks 100 days in office

Closing down Guantanamo, pulling out of Iraq, rejecting torture on principle, making overtures to Iran – most of the US president’s first policy initiatives have gone down well in Germany. (29.04.2009)

One of Spain's best-known judges has opened an investigation into the Bush administration over alleged torture of terror suspects at Guantanamo Bay. (29.04.2009)