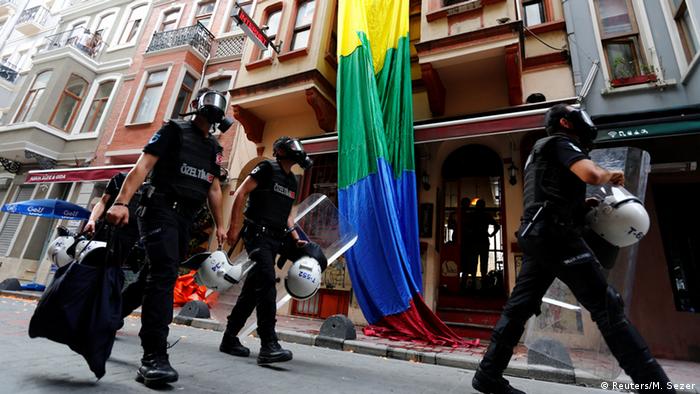 Turkish police briefly detained a prominent member of parliament from Germany's Green Party on Sunday as he participated in a banned gay pride march in Istanbul.

Volker Beck, an outspoken gay and human rights activist, was roughed up and briefly detained while preventing police from arresting a Turkish gay rights activist trying to read a statement in central Istanbul's Beyoglu area.

"Police snatched my passport and shoved me," Beck said. "What we have seen here was a massive and arbitrary police attack."

Terry Reintke, a Green Member of the European Parliament from Germany, was also briefly detained.

The two Green politicians said Max Lucks, the speaker of the Green Youth Group in the German state of North-Rhine Westphalia, and Felix Banaszak, the Green party speaker in Duisburg, were also arrested and remained in custody.

Istanbul's governor banned the gay pride march scheduled for Sunday and another transgender demonstration last week, which was broken up by police. The governor cited security concerns, but this year's gay pride marches also coincide with the holy month of Ramadan. Last year's march, which also coincided with Ramadan, was also banned.

Turkish gay rights activists said in a statement that they would follow the governor's warning to "disperse" by fanning out across the city - and even taking to the Bosporus in boats.

"Those who banned our march used 'society's sensitivities' as an excuse. But what's being guarded is not society's, but the government's sensitivities," they read in a statement.

Activists proceeded to read statements from various points, wave the rainbow flag and paint the streets with gay pride colors. Most of the protests were centered around Beyolgu, the city's liberal commercial area filled with shops, bars and restaurants.

At least 19 people have been detained, Istanbul Pride organizers said on Twitter.

Police in Turkey have violently broken up an LGBT rally in Istanbul. The incident has served to polarize Turkish society even further, Seda Serdar writes. (20.06.2016)