Opinion: Will conservatism help Turkey′s Erdogan? | Europe | News and current affairs from around the continent | DW | 20.06.2016

Police in Turkey have violently broken up an LGBT rally in Istanbul. The incident has served to polarize Turkish society even further, Seda Serdar writes. 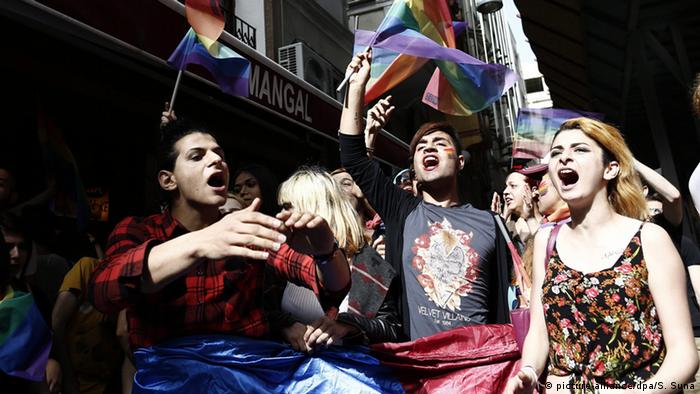 Last weekend, as people gathered in Europe to show solidarity for the victims of the horrific attack in Orlando, Turkey's LGBT community was faced with hatred and violence.

The Pride Week, which began on June 20, kicked off with yet another brutal confrontation with the police.

Clearly, the divide within Turkish society is deepening. As in the past, this year's Pride Week coincides with Ramadan, and one sees an increase in hate speech on social media.

Turkey has not only failed to stand in solidarity with Orlando, barely one week after the attack, but has also mirrored the hatred in society towards those who are not in line with a conservative way of life.

Turkey has become more polarized than ever. This is a shame and is also troubling for the country.

Erdogan is trying to micromanage

Istanbul is not only struggling to keep its LGBT community safe, but is - yet again - confronted with controversial plans for the future of Gezi Park in Taksim Square.

As the former mayor of Istanbul, President Erdogan is eager to rebuild the historic military barracks in Gezi Park. Three years ago, millions of people protested against the Justice and Development Party's (AKP) decision, leaving Erdogan resentful of his citizens. He realized that there was a huge group of people who his party was no longer able to convince.

However, there is more to this than pure stubbornness.

By creating more tension among people, the AKP hopes to distract attention from the ongoing and never-ending struggle against terrorism. At the same time, the government is trying to keep quiet about Iranian-Turkish businessman Reza Zarrab, who is being tried in New York on charges of corruption and tax evasion.

Zarrab's name is also linked to the December 2013 corruption scandal in Turkey, which, the AKP argues, was a conspiracy aimed at overthrowing the government.

While all eyes are focused on Istanbul's Pride Walk and the president's statements on the future of Gezi Park, the Nationalist Action Party (MHP) is working hard in Ankara; its members are relentlessly trying to reform the organization.

By doing so, they hope to regain the votes that were lost to the AKP, which played the nationalist card brilliantly in the previous elections. If MHP succeeds, it could cause Erdogan's party to lose ground. But whether this will help stop polarization within Turkey is a big question mark.

The government is well aware of this, so it is now playing the "conservatism card" whenever it gets the chance. Of course, the AKP is trying to hold on to its nationalist supporters, but promoting less tolerance will encourage further hatred and division within the country.