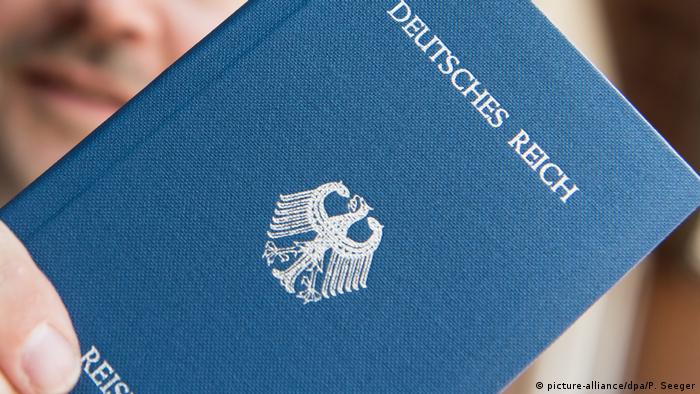 German police on Wednesday swooped on 25 apartments across two states, retrieving weapons, as well as forged passports and driving licenses.

Read more:  What is behind the right-wing 'Reichsbürger' movement?

Officers targeted the homes of some 31 suspects, from the Reichsbürger scene across the states of Baden-Württemberg and Hesse, who are accused of crimes such as forgery and damage to property.

One suspect was said to have been hoarding 700 knives and 190 axes in his apartment.

The Reichsbürger movement denies the legitimacy and authority of the modern-day German government and produces its own aspirational "German Empire" documents such as passports and driving licenses.

Read more:  German biathlon ex-coach fights to get weapons back after extremism accusation

Partially outlawed as of March

Among the other fake documents found were counterfeit certificates of nationality and numerous fax messages with content denying the existence of the state.  Also found in the raid were drugs and large sums of cash.

The accused include leading members of the "Republic of Baden" and "Free People's State of Württemberg" groups and their umbrella organization, the "Federation of States of the German Reich." Investigators also noted that the investigation and examination of material seized in the raids was ongoing.

In March, German Interior Minister Horst Seehofer banned a faction of the far-right movement, with simultaneous raids at the homes of 21 radical group leaders.

Members of the Reichsbürger movement, or Imperial Citizens' Movement, say they do not believe in the Federal Republic of Germany, the democratic state that was founded in the country after World War II and still governs today. The group believes that the German Empire continues to exist, with the land and territories it held prior to World War Two.

In 2015, conspiracists feared refugees were taking over. Today they see dark global forces gaining power amid a global pandemic. Alexander Görlach asks: What happens when society can no longer agree on basic facts? (13.05.2020)