Clashes between police and Kurdish protesters occurred over banned PKK symbols. Germany has taken a harder line against PKK symbols in response to criticism from Turkey. 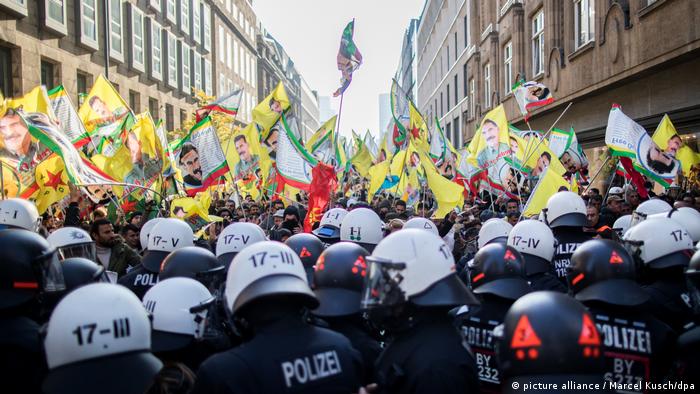 The violence erupted when police warned protesters to take down banners of Abdullah Ocalan, the imprisoned leader of the outlawed Kurdistan Workers' Party (PKK).

When the warnings were ignored, police moved in to remove illegal banners and stop the march.

Around 6,000 people attended the march through the center of the city, with some chanting "Down with fascism," "Freedom for Ocalan" and "Long live leader Apo," the nickname used by PKK supporters for Ocalan. 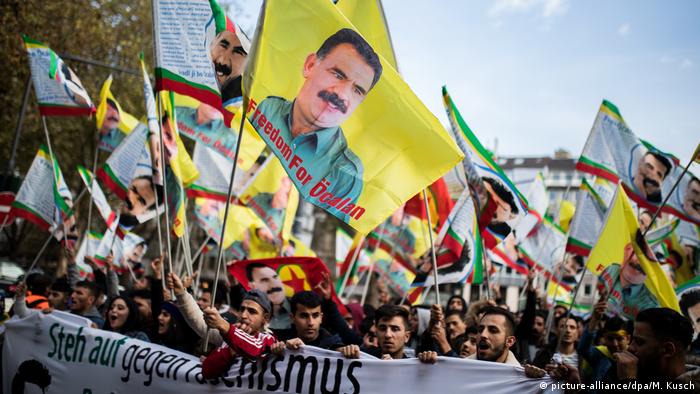 The PKK, which has waged a more than three decade-long insurgency against the Turkish state, is considered a terrorist organization by Turkey and the EU.

Germany had long been lenient towards Ocalan flags and PKK symbols, but earlier this year authorities moved to expand the list of banned symbols.

Protesters at Kurdish rallies carry a plethora of flags and symbols of dozens of Kurdish umbrella organizations, making implementation of the law confusing and uneven.

As restrictions on PKK symbols grow, Kurds have often resorted to using symbols of the Syrian Kurdish parties that following Ocalan's ideology and the People's Protection Units (YPG), a Syrian Kurdish militia that is backed by the United States to fight the "Islamic State" and not considered a terrorist organization.

Turkey considers the YPG and its political wing, the PYD, a terrorist organization with ties to the PKK.

The tougher line against PKK symbols came in response to repeated Turkish criticism that German authorities were too soft on allowing "terrorist propaganda." The issue has been a major sore spot in already sour Turkish-German relations.

It has also increased worries that the conflict in Turkey could lead to violence and social divisions between some three million Turks and Kurds living in Germany.

In September, Germany's ambassador in Ankara was summoned to the Turkish foreign ministry after Ocalan symbols were allowed at a major Kurdish rally in Cologne.

Kurdish organizations have accused the German government of kowtowing to Turkey.

ANF news agency, which is tied to the PKK, quoted the co-chair of the Brussels-based European Kurdish Democratic Societies Congress (KCDK-E) as accusing Germany of taking orders from Turkey.

"The German government is carrying out Erdogan's orders, banning and blocking our symbols. We absolutely don't accept this and will resist," it quoted Yuksel Koc as saying at the march. "Despite police attacks and bans our people resisted and didn't let the posters of our leader Ocalan fall. We didn't bow down and we have reached our goal, everyone should recognize that."

Demir Celik, the co-chair of the Brussels-based Peoples' Democratic Congress-Europe (HDK-E), was quoted by ANF as saying: "Today in the mountains and in Syrian Kurdistan the flame of freedom has been ignited. All of our people's eyes are looking there. Here, we are in a struggle against oppression and fascism (by the Turkish state). I invited everyone to rebellion. Until Ocalan is free we will continue our struggle everywhere."