A week after Germany's parliamentary election, the main four parties are starting formal coalition talks. The conservative CDU and center-left Social Democrat parties are both seeking to lead the new government. 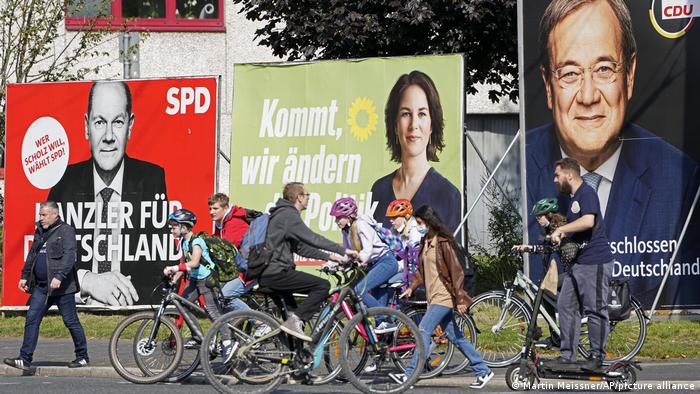 The center-left SPD won just over a quarter of the votes in last week's election, more than any other party

The four parties with the greatest chances of forming a coalition government were set to start negotiations in earnest on Sunday, a week after the election left no decisive winner.

The center-left Social Democrats (SPD) were set to meet with the neoliberal Free Democrats (FDP) in the afternoon, with a later meeting with the Greens also on the docket.

The conservative Union, made up of Angela Merkel's Christian Democratic Union (CDU) and its Bavarian sister party the Christian Social Union (CSU), were also planning to sit down with the FDP on Sunday evening. The Union and Greens were set to meet on Tuesday.

The SPD emerged as the party with the most seats in the September 26 election, but only marginally ahead of the center-right Union. Both parties would need to form a coalition with two others — namely the Greens and FDP — to reach the chancellery.

The Greens, who came third in the election, and the FDP, who came fourth, have already met for talks as the two so-called kingmaker parties.

The left-leaning Greens have stated their preference for a coalition with the SPD, while the FDP would prefer a conservative-led government. The Greens have also clashed with the FDP over how to finance the greening of German industry.

The Green Party held a party congress on Saturday which agreed on a negotiation team but also determined that any coalition deal, including who would get which ministry position, would have to be voted on by the entire Green Party membership — some 120,000 people.

The youth wing of the Green Party has expressed a total rejection of any option of forming a coalition with the CDU. "Helping the election loser to reach the chancellery is, in our opinion, not an option," the youth leaders said.

How much change does Germany need?

FDP leader Christian Lindner told the German newspaper Bild am Sonntag on Sunday that his party was "ready for serious talks with the Union," saying that the SPD's plan to raise taxes and remove the debt break was a red line.

However, he also criticized the CDU/CSU's plan to wait for talks between the other parties to break down first.