German youth voted for change — but what does that really mean?

In last weekend's German election, the neoliberal FDP was the most popular party for first-time voters, along with the environmentalist Greens. For some, this was no surprise. 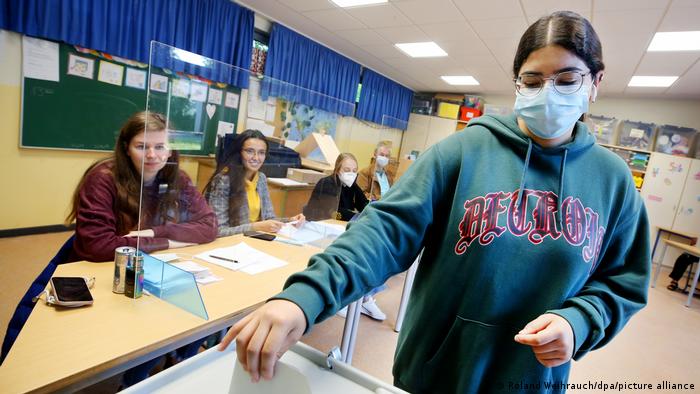 Eighteen-year-old Oskar Teufert from Saxony headed to the polls for the first time last Sunday. He followed the trend of his generation and did not cast his ballot for either of the two big tent parties of Germany, the conservative Christian Democrats (CDU) and the center-left Social Democrats (SPD) — and instead plumped for the business-focused Free Democrats (FDP).

The FDP is one of two parties that have been dubbed the kingmakers in the coalition talks to form Germany's new government, along with the Greens. Both enjoyed broad support from young voters.

It may come as no surprise that young people voted for the Green Party in large numbers. After all, youth have repeatedly said in polls that climate protection is the most important thing to them and the Fridays for Future school strike movement, spearheaded by Swedish teen activist Greta Thunberg, has been enormously popular in Europe's largest economy.

But the FDP also did well among young people and first-time voters. For those under the age of 24 they came a close second to the Greens, and among first-time voters they narrowly beat out the environmentalist party to be the most popular choice, with 24% of the vote share. That's compared to 11.5% in the electorate as a whole.

Teufert said pensions were one of the reasons he voted for the FDP. The Free Democrats believe the current statutory pension insurance system has failed. They want to bolster it by introducing a statutory equity pension based on the Swedish model.

"I think it's incredibly important to a lot of young people how pensions are going to work," said Teufert. When it comes to pensions as a young person today, "you're bound to end up with the FDP."

Jona from North-Rhine Westphalia, another first-time voter who only gave his first name, went for the Green Party but is not surprised by the success of the FDP.

"It's because of the young, digital image of the FDP," he said, citing their savvy social media use and embracing of memes and other online forms of communication. "They're also progressive on social issues, pro-LGBTQ for example, which is important for young voters."

"I don't think the FDP is a bad option in principle. But they have the problem that they are not a party for the less advantaged; they are neoliberal," he said.

"But I can also understand that many young people are annoyed with the Greens," he added, given their policies that have been perceived as limiting freedoms and dominated by restrictions and regulations.

The high youth support for the Greens and the FDP did not surprise sociologist Norbert Schäuble, of the Sinus Institute for Market and Social Research. "Young people are just as diverse as the population as a whole," he said.

The Sinus Institute has produced a model to explain the distribution of the German population's social backgrounds, which identifies groups that are concerned with "reorientation." This includes the so-called Expeditive Milieu and the Neo-Ecological Milieu. According to Schäuble, these are the "future milieus" — in other words, the trendsetters.

Both groups are united by concerns and thoughts about the future, but they differ in their ideas on how to shape it, Schäuble said.

"The Neo-Ecologicals' focus on climate protection, sustainability and normative requirements up to and including renunciation. The Expeditives are more focused on digital innovation and technologies, personal responsibility and freedom," he said. "These visions of society are most likely to be attributed to the Greens and the FDP, who are convincing with their respective narratives of the future." 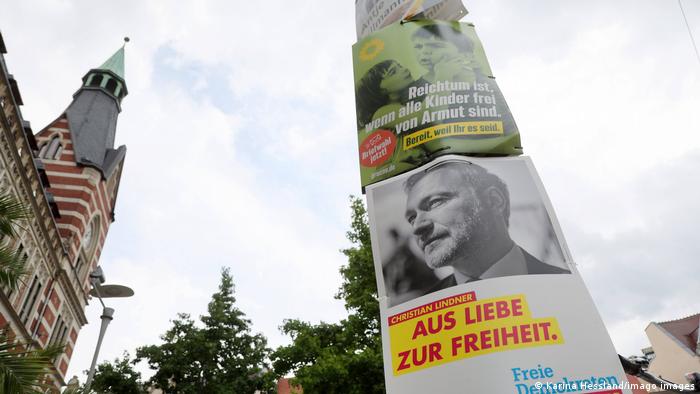 Teufert and Jona may have voted for different parties, but they are equally pleased with the prospect of both of their favored parties entering government.

"Now with strong Greens and a strong FDP and a relatively weak CDU and SPD, the coalition partners' policy ideas will be high on the agenda," Teufert said, mentioning climate protection legislation as a key issue. He would prefer a coalition of the CDU/CSU-Greens-FDP, but acknowledges that it is unlikely.

Jona supports a coalition of Social Democrats, Greens and FDP, but is wary of the possibility that the FDP and Greens might decide to cooperate with the CDU/CSU instead.

"I think it's a bit cheeky that the FDP said straight away they'd also talk to the CDU/CSU, even though they didn't win," he added. The FDP has historically been the preferred coalition partner for the CDU/CSU.

But, for both the CDU/CSU and, to a lesser extent, the SPD, this election has shown that their voter base is aging, with the parties winning a respective 38% and 35% share of the over-70 vote. The younger generation's preferences will shape elections to come.

Demographic developments are changing the rules of politics in Germany. Older voters decide policies for the future, and that's an imminent danger for Germany, writes DW's Astrid Prange.