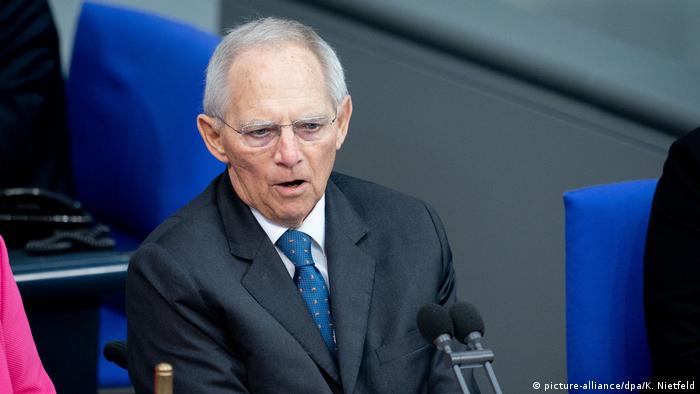 German parliamentary speaker Wolfgang Schäuble on Sunday called on European Union member states to have the "courage" to establish stronger EU integration and expand the eurozone into an economic union.

"We cannot miss this chance again," Schäuble wrote as a guest contributor to German newspaper the Frankfurter Allgemeine Zeitung.

"We would be significantly further ahead in Europe today if the idea of ​​establishing a European monetary fund had prevailed in the 2010 Greece-crisis."

Europe today needs "the courage that we did not have in the 2010 crisis to finally achieve more integration in the eurozone," said Schäuble, citing the coronavirus pandemic as even more of a reason why EU countries should move closer together.

"Critical developments have been going on in Europe for a long time. Now we should use the coronavirus pandemic to ask ourselves… what can we do better for the future?" he wrote.

The former finance minister criticized Europe's current discussions on finance for concentrating too heavily on aspects such as "whether proposed aid flows as grants or as loans" instead of addressing what actions the bloc could execute more specifically and concretely to "advance Europe collectively."

Schäuble, who is the current president of the Bundestag, played a major role as finance minister from 2009 to 2017 in the management of the European debt crisis.

"After a tough struggle, they agreed to start a monetary union with the expectation that further steps towards economic union would follow. That did not happen," Schäuble said, adding that a monetary union cannot be sustainable in the long run without a "political equivalent" and called for "common economic and financial policy" to "stabilize the single currency permanently."

The Christian Democrats (CDU) politician also emphasized that the EU's issue of migration remains equally of importance amid the coronavirus crisis. He called for a common European asylum law with harmonized standards to improve the bloc's internal security and stability.

However, Schäuble added that conflicts between the EU member states over migration policy cannot be resolved purely by legal means.

"The attempt to force binding admission quotas through a majority decision in the Council has not pacified the conflict, but rather exacerbated it. However, joint initiatives were indispensable for the protection of Europe's borders and the people on both sides of these borders," he wrote.

Schäuble pleaded for pragmatic solutions, especially for "rescue and asylum centres outside the EU, in which we guarantee human living conditions and which we have to protect." He said such a mission would "certainly also involve states that have so far refused to distribute migrants."

Eurozone finance ministers broke off talks on measures to address the effects of the coronavirus pandemic on national economies. This is no ordinary EU drama, DW's Bernd Riegert writes: This time, there is much at stake. (08.04.2020)

Polish Deputy Prime Minister Jadwiga Emilewicz says her country is well-positioned to weather the economic crisis caused by COVID-19. She spoke to DW about the pandemic, and what it means for the European Union. (25.05.2020)

Germany and France have suggested a common debt instrument to help the European Union recover from the economic fallout of the COVID-19 pandemic. It's a risky move — but one that was necessary, says Bernd Riegert. (19.05.2020)

How Greece's crisis is helping it bend the COVID-19 curve

As Europe remains in the grip of the coronavirus pandemic, one country is slowly winning its battle. In the story of unlikely successes, few could have guessed that Greece would emerge as an outlier. (02.05.2020)

Germany: Business confidence plummets as economy 'on cusp of recession' 25.07.2022

German businesses have been losing confidence in the current economic climate as growth prospects worsen. The ifo Institute that published the survey pointed to high energy prices.