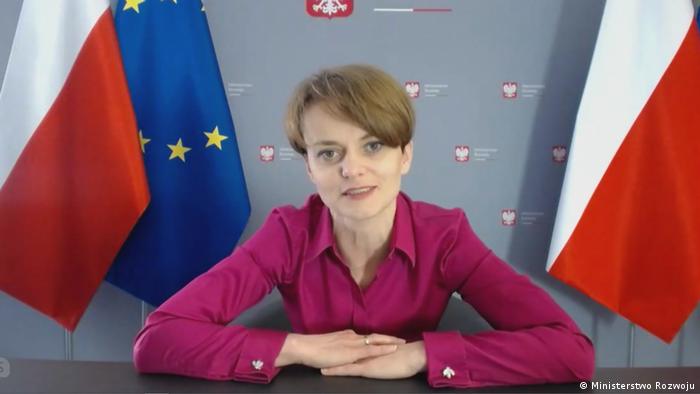 DW: According to some projections, Poland will get through the coronavirus crisis better than all other EU members. What is your impression?

Jadwiga Emilewicz: No fiscal or financial instruments will work if an entire state, or economic sector, has been placed under quarantine. But the preliminary data on whether the Polish economy will get through this crisis look promising. After the first week of the economic freeze, we expected unemployment numbers to rise much more. The coronavirus situation has plunged us into extreme uncertainty. But the Polish economy, which is built on small and medium-sized companies and domestic demand, has proven resistant in this crisis.

You said once Poland could benefit from this crisis. Do you still feel that way?

Until recently, anti-globalization activist were a fringe movement. Now, we are witnessing a veritable deglobalization. The European Commission's recovery plan wants to redefine our notion of security. Security encompasses more than military power, and resources like oil and gas. We are now realizing that security is also about face masks, personal protective equipment and disinfectants. Over the past decades, we have gradually outsourced their production beyond Europe's borders. Rebuilding local production chains will define the next decade, at least. This is where we have special expertise. Poland has many companies that produce parts for Germany's car and furniture industry, and our IT experts work for many different markets.

What do you mean by deglobalization? Less reliance on China — or also Germany?

When the pandemic started, there were fears we would see food shortages in Poland. But we are one of the EU's biggest food producers — 85% of the food in Poland is produced inside the country. We did get calls from Portugal, which imports most of its food, asking us how much we would be able to export.

We can see from statements made by [French President Emmanuel] Macron, [German Chancellor Angela] Merkel and my colleague [German Economy Minister Peter] Altmaier that they want to see certain sectors return to Europe as well. The meaning and purpose of the European Union is changing today.

Poland has largely sealed its borders. How much has that harmed your economy?

Many Poles who live near the border and work in Germany, the Czech Republic or Lithuania have lost their jobs and contacted our ministry for help. And the time for seasonal workers has just started. Closed borders are an especially serious problem for countries where the tourist industry is a big pillar of the economy. We are considering reopening the country on June 15, but we would have to be very careful and practice physical distancing and ensure everyone wears masks, or carry out tests.

The government has said only the nation state can effectively protect its citizens. Do you believe Europe has failed in the pandemic?

Nation states were the quickest to respond when this crisis began. The European Commission was slow to act. Southern European states were highly critical of European institutions, because they felt left to their own devices.

But the crisis also represents a new chance for the European community. Since the very beginning, citizens of members states have believed in the promise of progress. Entire generations of people were convinced by the idea that one day, they would be better off than their parents' generation. But this promise has gone unfulfilled, even before the pandemic. This is evident from the yellow vests movement in France, and the recent outcomes in German state elections.

We need to stop thinking of Europe as an exclusively economic project. If this is the only thing we think of, citizens will turn their backs during an economic crisis. They will say they do not want the bloc, because it does not guarantee economic stability. And Poland sees the European Union as much more than the European Investment Bank, and what the bloc adds to the gross domestic product.

It's interesting you say this. In Germany, there is the widespread belief that Poland is only interested in EU funds.

That stereotype is completely false. But it's also the direct consequence of the European Commission's attitude. Just look at the condition that every EU investment must be marked as such. The European Union has been reduced to the "Funded by the European Union" label.

Surveys in the early days after communism showed many Poles considered the US as their closest ally. This has changed for the young generation. And we do not view the European Union as exclusively about money.

Jadwiga Emilewicz was named deputy prime minister in Prime Minister Mateusz Morawiecki's second Cabinet in April. She has served as development minister since 2019, and was previously minister of entrepreneurship and technology from 2018 to 2019. She is also vice chairwoman of the liberal-conservative Porozumienie, or Agreement party, a junior coalition partner to the ruling national-conservative PiS.