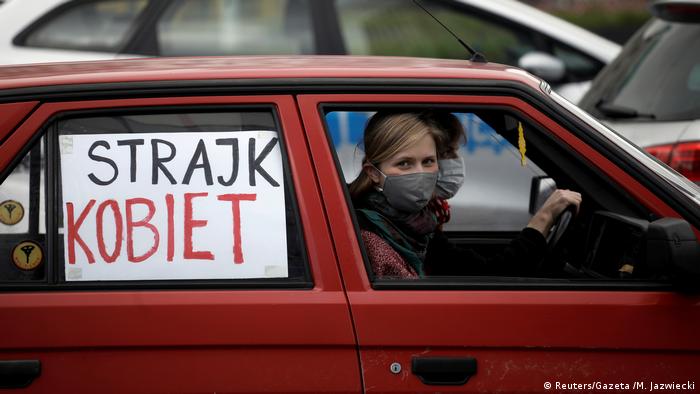 Honking cars block the half empty streets of Warsaw. Red lightning bolts — the symbol of a new round of protests — emblazon their windshields, accompanied by signs calling for the rejection of new abortion restrictions. Masked passengers wave flags with phrases like that of the popular hashtag campaign #pieklokobiet (Women's Hell).

Those who are forced to line up in front of shops due to coronavirus social distancing measures carry placards with slogans demanding politicians "fight the virus, not women." Some carry umbrellas, which have been another symbol of women's protests in Poland over the past several years. In this way, many liberals in Poland have been able to voice their displeasure with moves to further tighten the country's already strict abortion laws

Poland's abortion laws, passed in 1993, are among the strictest in the European Union (EU). The laws dictate that abortion is only allowed — even in cases of rape or incest — if the mother's life is in danger or a fetus shows severe defects, and that only until the 12th week of pregnancy. Doctors who perform abortions theoretically face anywhere between six months and eight years in prison if they are found to have broken the law.

Not all Poles are opposed to tightening the laws. In fact, members of the country's 830,000-strong "Stop Abortion" initiative have vociferously campaigned for politicians to crack down further still. They make no exception for gravely ill or deformed fetuses, and see an either/or proposition: Exceptions if a mother's life is in danger, or jail time if it is not. 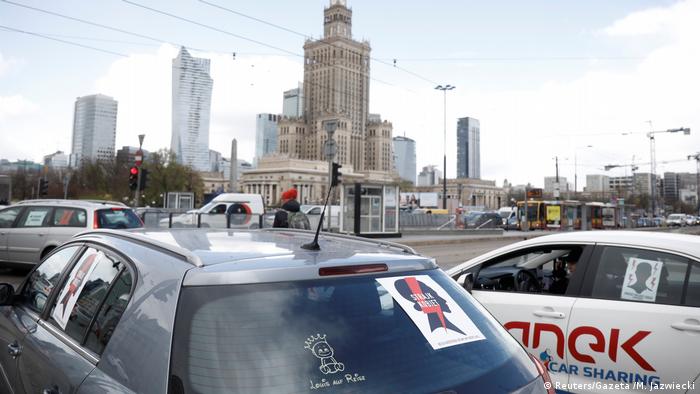 People drive their cars with a "Women's Strike" banners featuring the red lightning bolt in protest against new limits on abortion.

Strong support from the government

Proposals for tightening abortion laws have been circulating in the Sejm, Poland's parliament, since the fall of 2017. But it was not until recently that the body's Law and Justice (PiS) party majority decided to move forward with the new measures – only one month ahead of presidential elections and in the middle of the global coronavirus pandemic. Kaja Godek, spokeswoman for the Stop Abortion initiative, says the move has symbolic meaning, "because we now better understand the need to protect human life."

The initiative has also garnered support from the ruling PiS party. "Eugenic abortions must not be legally allowed," as Deputy Prime Minister Jacek Sasin argued ahead of the parliamentary debate. PiS party leader Jaroslaw Kaczynski has also signaled his backing throughout the ongoing debate. Kaczynski has said that in the event the laws are tightened, stillborn babies born to women forced to bring them to term could be "baptized, buried and named" in accordance with the Catholic faith.

Opposition figures say that bringing this divisive topic up for discussion this close to elections and in the middle of the pandemic is nothing more than an attempt to distract voters.

Barbara Nowacka, a leading politician from the Civic Coalition (KO), Poland's largest opposition party, says it is scandalous that "Parliament wants to discuss projects put forth by fanatics at a time when people are fighting for survival, when companies are going bankrupt and many Poles are losing their jobs and apartments."

Nowacka says the PiS simply wants to shift attention away from the fact that the country doesn't have enough face masks for citizens and that its hospitals are ill-equipped to deal with the current health crisis.

KO presidential candidate Malgorzata Kidawa-Blonski opposes tightening abortion laws, too: "We politicians have to create a situation in which women feel safe. Every election season we are forced to revisit this issue, and every time we see an attempt to rob women of the ability to make this difficult decision on their own." 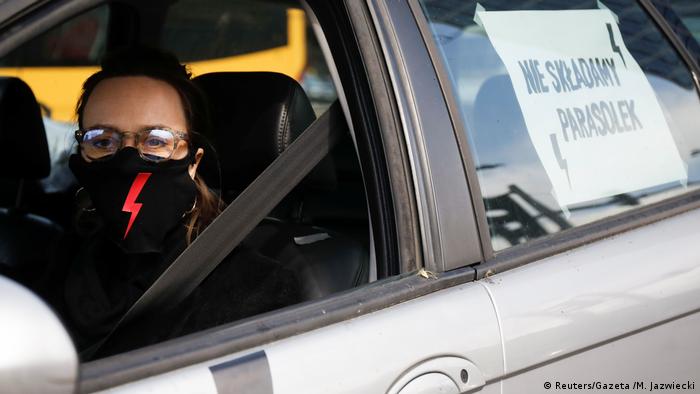 Abortion has indeed been the topic of debate in most every election that has taken place in the country since 1989. Still, it has played an outsized political role since the PiS came to power in 2015.

Numerous women's protests have taken place over the past several years, among them the so-called black marches, in which women donned black clothing to symbolize their opposition to the laws. Coat hangers — a symbol of illegal abortion — have been a regular feature of the protests as well.

Author and feminist Sylwia Chutnik, who helps organize protests, tells DW, "We women are treated as if we have no conscience nor morals. We women are used as tools in any number of political games."

The campaign against stricter abortion laws has also gained support from a number of well-known personalities, such as Polish supermodel Anja Rubik, who wrote on Facebook: "Sadly, we once again have to fight for our health, our safety and our dignity."

Recent opinion polls show that a vast majority of Poles oppose a further tightening of abortion laws. That is up from last year, when the liberal newspaper Gazeta Wyborcza found that just over half of those they interviewed were in favor of allowing abortions until the 12th week of pregnancy.