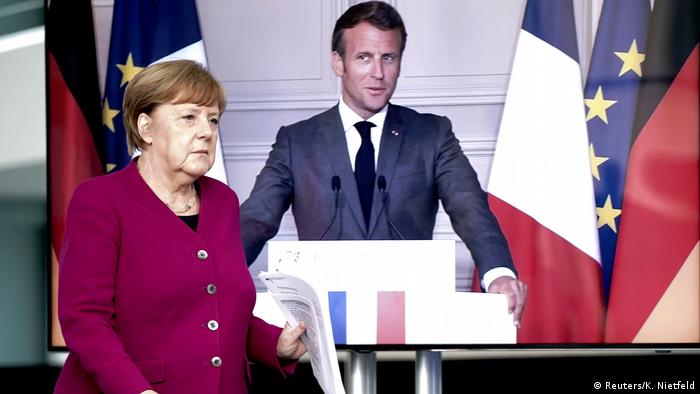 France and Germany are once again pushing ahead with a common European agenda — finally. French President Emmanuel Macron and German Chancellor Angela Merkel have overcome their differences with regard to getting the EU economy back on track after the coronavirus pandemic. Merkel has changed tack, in principle agreeing to the idea of collective debt — despite the ban on debt-sharing in the treaties that created the eurozone.

Macron has tabled a proposal that could see €500 billion (about $546 billion) distributed mainly to heavily indebted southern EU member states in grants rather than loans, as originally envisioned by Germany and other wealthy EU states. Macron, incidentally, had initially called for three times this amount of money to be distributed.

So far, Macron's idea remains a proposal. One, however, that already has the support of the European Commission, and thus puts eastern and northern EU states under pressure to acquiesce. The arrangement, after all, would see them receiving less money and subsidizing countries like Italy, Spain and France, who have been hard hit by COVID-19.

EU member states like Poland, Hungary, Bulgaria and Romania — who have been net recipients of EU funds — will now be expected to show solidarity with member states reeling from the effects of the pandemic.

Before any of this can become a reality, however, Merkel will first need to get her very own Christian Democratic party on board, as well as its Bavarian sister party, the Christian Social Union. This will prove challenging, as both have opposed the idea of increased spending.

Macron and Merkel have suggested that the European Commission could finance the recovery fund by taking on collective EU debt. Over the next 20 years, member states would then collectively repay what is owed according to their overall contribution to the EU budget. This looming debt would, however, limit European governments and parliaments in their ability to spend at home until 2040.

Macron and Merkel are effectively proposing the bloc issue eurobonds, or coronabonds — government bonds with limited liability. This, however, may violate Article 311 of the Treaty on the Functioning of the European Union, which stipulates that the EU budget be funded solely from states' own resources. It will now be on EU legal experts to find loopholes around this provision.

Macron and Merkel have taken the necessary decisive action amid an unprecedented crisis. Together, they are pushing for a shared European solution. But it remains to be seen if all member states are willing to tag along.

Next week, the European Commission will present its comprehensive budget plan, of which the recovery funds is but one element. EU members will have to come to an agreement soon if the money is to be handed out this year to kick-start the bloc's economy. But it does look like this one-off compromise could become a reality.

Germany's top diplomat Heiko Maas held a conference with his Mediterranean counterparts to discuss plans for the summer tourism season. Countries like Greece and Croatia have weathered the pandemic relatively well. (18.05.2020)

WHO members agree to independent probe of coronavirus response

A resolution to investigate the global handling of the coronavirus pandemic has been adopted at the WHO's conference. The EU backed the move, but defended the WHO from US President Trump's threats to withdraw US funding. (19.05.2020)