A top German Olympics official has come under increasing fire for his early and absolute stance opposing a boycott of the Games. However, Thomas Bach is sticking to his guns. 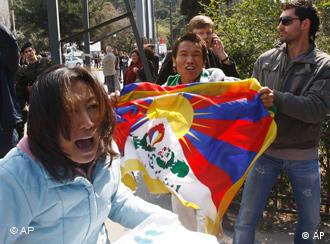 Tibetan protesters have accompanied the Beijing Games from the get-go

Bach, the vice president of the German International Olympic Committee (DOSB), has defended his statements that Germany will not boycott the Olympic Games in Beijing, despite growing complaints about China's human rights record and its military opposition to Tibet independence.

But criticism of Bach is becoming louder in the wake of disruptive demonstrations against the Olympic torch relay, as the symbolic flame moved through London over the weekend and headed for Paris on Monday, April 7.

In March, despite high-profile unrest among Tibetan independence protesters, Bach had stated definitively that Germany would not boycott the 2008 Olympics in Beijing.

"After weighing all the arguments, and aware of our responsibilities to the athletes, the DOSB will send a team" to the Games, Bach had told the press on Easter Monday. Despite Chinese repression of Tibetan protesters in Lhasa, the International Olympic Committee had "neither the mandate nor the possibility" to intercede, he said. 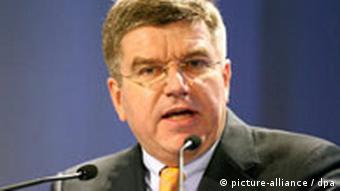 And as protests around Europe on behalf of Tibetans flared up over the weekend, Bach stuck to his guns in an interview with DPA press agency, saying: "There is mutual agreement, not only among IOC members but within all 205 national Olympic committees, to send athletes to the Games."

But criticism of Bach's absolutist stance appears to be growing, among politicians and sports officials alike.

On Friday, Peter Danckert, the chairman of the sports committee in the German parliament, criticized Bach for his "precipitous and unnecessary commitment" on the boycott question, and also for his planned participation in the torch relay in China.

Over the weekend, other politicians joined in the critiques: Hesse Premier Roland Koch commented to the Welt am Sonntag newspaper that it was "unnecessary [for Bach] to say there would be no boycott, so early on."

Koch said he thinks holding the games could be ultimately better for the cause of Tibet than a boycott, "but there is a critical boundary. After the violent suppression of the democracy movement [at Tiananmen Square] in 1989, we couldn't have held the Olympics."

And Manfred von Richthofen, who led the predecessor organization of the DOSB, the DSB, told Berlin newspaper Tagesspiegel that he felt hurt by Bach's "insensitive course of action." An early guarantee of sending a team to the Games just means those in power in China can feel more secure and won't change anything, he said. 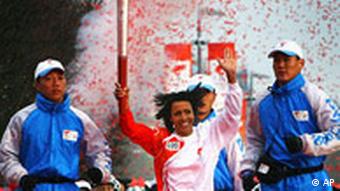 Despite protests, the flame made it through London

The Green party, too, accused the German government of giving the Chinese carte-blanche for their behavior by ruling out a boycott. And the head of the Bundestag's Foreign Affairs Committee, Ruprecht Polenz, said the DOSB had sent a "precipitous and false signal" from Germany. He urged athletes to speak their minds during the Games -- outside of the competitions.

The IOC has threatened to kick athletes out of the games who protest within the Olympic compounds.

Bach: "the world is full of war"

Bach maintains that athletes can speak their minds during the games, but added that a sports contest should not be "weighed down" by political demonstrations.

"There are around 50 wars going on right now in the world," he told DPA. "If every one of those countries wanted to have a political demonstration then the Games would be overloaded."

German athletes heading for the Olympics are exploring symbolic gestures such as wearing orange bathrobes -- the color of Tibetan monks -- to express their protest over China's actions in the Himalayan region. (30.03.2008)

Should Germany's Olympic Committee have made such an early commitment to staying in the Olympics? Please include your name and country in your reply.