An eastern German state premier, Bodo Ramelow, has said Germany should have a national anthem that all the country can sing along to. For him and others, the Nazi associations linger, and East Germans never got a choice. 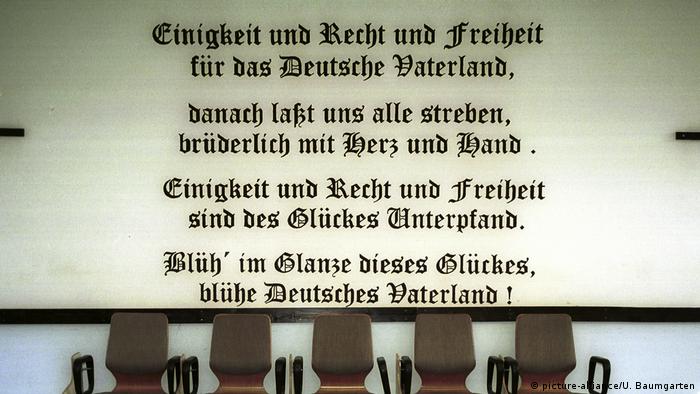 Comments by the state premier of the former East German state of Thuringia on Thursday have re-inflamed an old sore point between the two former Germanys. Some three decades after the reunification, Bodo Ramelow argued at the end of an interview with the Rheinische Post newspaper that many people from the former communist part of Germany did not sing along with the current anthem.

"I would prefer if we had a truly common national anthem," Ramelow, of the socialist Left party, said. "But up until now this wish has only called up outrage." At Friday's regular government press conference, Angela Merkel's spokesman Steffen Seibert did not offer outrage, but calm dismissal, saying that the chancellor, who grew up in East Germany, "finds our national anthem very beautiful, both in music and text."

The state premiers of the other former East German states (apart from Berlin) rejected Ramelow's ideas with firmer vigor. Saxony's conservative Michael Kretschmer, for instance, said, "I like to sing it very much and associate it with the great part of our history: the peaceful revolution, Helmut Kohl, and German unity." 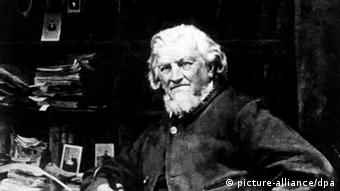 Nearly two centuries on, the German anthem author August Heinrich Hoffmann von Fallersleben has a lot to answer for in many Germans' minds

A song for all Germans?

As it happens, only the third and final verse of the old "Song of the Germans" is still used in Germany's national anthem today. This stanza, whose first line invokes the values of "unity and justice and freedom," is nowadays the most palatable part of the poem written by August Heinrich Hoffmann von Fallersleben in 1841 while on a summer holiday on the then-British-owned island of Heligoland. The poet was at the time in a post-Romantic nationalist fervor as disparate German peoples were struggling to establish a common identity in a war-torn Europe.

A century and two world wars later, the first two stanzas fell by the wayside, when references to "Germany over all" and "German women, German loyalty, German wine, and German song" were dropped by the new West German government (though Chancellor Konrad Adenauer did not heed those who would have preferred to scrap the whole thing).

The tune itself, composed in the late 1790s by Austrian composer Joseph Haydn, still carries an aftertaste of Germany's darkest era for many: Ramelow said that though he did still sing along to the third verse, "I can't blank out the image of the Nazi parades of 1933 to 1945."

Others cannot help but hear the old Nazi associations either: Ramelow's controversial remarks were themselves a response to another media outcry: over whether another Thuringian, Björn Höcke, one of the more extreme leaders of the far-right Alternative for Germany (AfD), had recently sung the taboo first verse at an AfD event.

Not that the state premier's remarks would have sounded particularly new to those former East Germans who can remember the tumult of 1989 and 1990. During the complex, some think hasty, negotiations to unify the two Germanys, there were East German campaigns to adopt a song called "Kinderhymne" ("Children's Hymn") as the new anthem for a new nation.

This four-verse song, written in 1950 by the playwright Bertolt Brecht (and set to music by Hanns Eisler) as a direct response to the old Nazi-era anthem, imagined a new country being built within a new brotherhood of equal nations:

Grace spare not and spare no labor
Passion nor intelligence
That a decent German nation
Flourish as do other lands.

Its lines even made sly references to the fantasies of domination that seemed to pervade the old poem:

Neither over nor yet under
Other peoples will we be
From the Oder to the Rhineland
From the Alps to the North Sea.

And because we'll make it better
Let us guard and love our home
Love it as our dearest country
As the others love their own.

One apocryphal anecdote, cited in Friday's Tagesspiegel, has it that East Germany's chief negotiator in 1990, Prime Minister Lothar de Maiziere, even got out his violin to play "Children's Hymn" to his counterpart, Wolfgang Schäuble, only to be brushed off by a West German Interior Minister who felt they had bigger things to worry about. 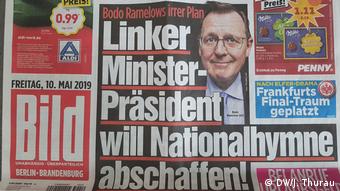 Ramelow's mention of the Brecht song apparently awakened a few nostalgic memories in German politicians who weren't afraid to pick at the scab on the division that still scars the two Germanys.

East German anti-regime activist Friedrich Schorlemmer told public broadcaster MDR that he considered it a "great mistake" that the idea of a new unified German anthem had never even been considered. He was also annoyed by suggestions from some politicians, like Manuela Schwesig, Social Democrat premier of the state of Mecklenburg-Western Pomerania, that there were more urgent issues to address, saying there was nothing more important than the values that Brecht's poem invoked.

Given the barrage of outrage from the conservatives in Germany's political landscape in response to Ramelow, it is unlikely that there will be a new German anthem anytime soon. Even so, a compromise was suggested on Friday by the veteran East German politician Wolfgang Thierse on the news portal t-online: to have contemporary poets add two more verses to the current one. But then who might dare do that?

Germany's women's tennis team have suffered a weekend to forget, losing 4-0 to the US in the first round of the Fed Cup. The defeat was overshadowed by the playing of an outdated version of Germany's national anthem. (13.02.2017)