Dozens of German cities petition to take in more refugees | Germany | News and in-depth reporting from Berlin and beyond | DW | 13.01.2020 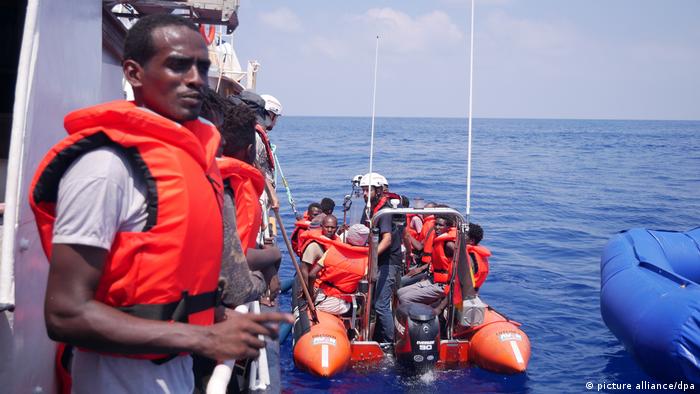 On Monday, a coalition of dozens of German municipalities demanded that Chancellor Angela Merkel's government allow them to immediately begin resettling refugees rescued on the Mediterranean Sea.

With EU efforts toward political solutions to rescue and distribute refugees effectively at a standstill, representatives from Potsdam, Düsseldorf and elsewhere told a joint press conference that it is their humanitarian duty to upend the current status quo on migration policy.

"We would be prepared to take in more people if we were allowed," Mike Schubert, mayor of Potsdam and a member of the initiative Cities of Safe Harbours, told reporters on Monday. "We are currently experiencing a policy of wait and see, but that's the opposite of acting."

Since Merkel's decision in 2015 to keep Germany's borders open to almost 1 million displaced people, her government has engaged in a "balancing act between promoting integration and controlling immigration," according to the Expert Council of German Foundations on Integration and Migration (SVR).

Read more: The chancellor who defined an era

Germany has passed legislation to prioritize the integration of asylum-seekers from Syria and other nations and has streamlined the application procedure with new administrative one-stop shops.

But, with migration remaining a top political issue among Germans and a clarion call for the far-right, Merkel's government has also moved to speed up deportations and has discussed bolstered police presence on the nation's borders to halt unauthorized migration.

It's a different situation entirely on the EU level, where "lawmaking on refugees and asylum is practically at a standstill," the SVR notes.

The European Union's adherence to the Dublin Regulation, a rule by which asylum-seekers must be processed in the EU country of their arrival, has put huge strain on nations such as Greece, Italy, Spain and Malta, where people who have made the treacherous journey across the Mediterranean often port.

In Greece, reports indicate that tens of thousands of people spend untold months living in squalor in camps packed far beyond capacity, while Italy has pursued legal action against civil society organizations that bring rescued refugees to the country's shores.

Meanwhile, EU states have severely cut back their own rescue efforts on the Mediterranean, leaving most work to just a few civil society organizations that operate ships in the region, the UN Refugee Agency notes.

Given the confusing legal and political situation, a coalition of member states — including Germany, Malta, Italy and France — agreed to a framework for saving and distributing refugees in September, with Interior Minister Horst Seehofer pledging that Germany would take in one-quarter of the people saved at sea.

Nearly 95,000 people made the journey to Europe via the Mediterranean in 2019, despite the EU's deals with Turkey and Libya to keep refugees in those countries. According to UN figures, 1,221 died during the crossing.

The Cities of Safe Harbours initiative seeks to break that standstill by petitioning for special permissions to immediately accept refugees rescued on the Mediterranean and stranded in Greece, Italy and elsewhere.

The coalition started with 13 founding municipalities in June 2019 and now has 120, representatives told reporters on Monday.

Cities of Safe Harbours has asked the government to trigger Section 23, Paragraph 1 of Germany's Residence Act, which allows for the immediate distribution of specialty humanitarian residence permits without legislative acrobatics.

"Municipalities need to have more say in the matter," said Miriam Koch, director of Düsseldorf's department for migration and integration, who added that the city has the capacity to take in 5,000 more people. "This urgent situation is only continuing, and we need to directly deal with it."

A representative from Germany's Interior Ministry told reporters on Monday that Seehofer is open to talking about the initiative's plan, though a concrete date has not been set for when federal and municipal officials could meet.

Cities of Safe Harbours members contended that they have appealed to the Interior Ministry since before the initiative's founding and still have not received an answer to their calls.

"What's the alternative to saving people at sea? To allow people to drown?" said Schubert, the mayor of Potsdam. "The number of those who stand at the ready to intercept this catastrophe is growing every day."