German Angst 2019: Germans less fearful than ever before

Germans are less scared than they have been since 1993, according to a new poll. Germany straining under the migrant crisis has beaten Trump to the top spot. 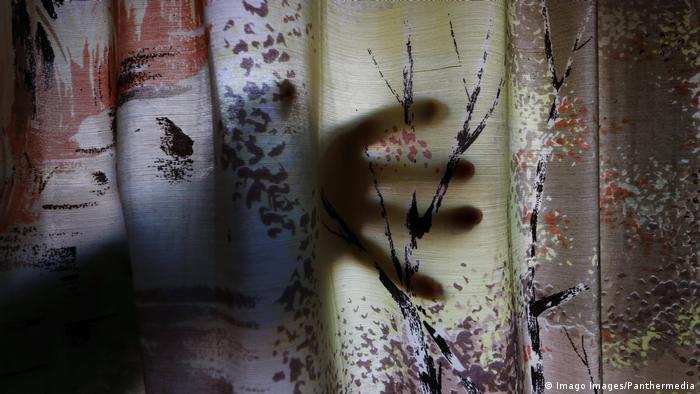 One of the few German words which many English-speakers know is "angst" — fear. But according to a new poll that examines what Germans fear the most, they seem to be less scared than ever before.

Since 2004, Germans have been scared primarily of a possible economic downturn, terrorism, and most recently of US President Donald Trump and his influence on world politics. The annual study conducted by R+V, Germany's largest insurance firm, has been asking Germans about their biggest fears since 1992.

This year, for the first time, a majority said they were most afraid that the country would be unable to deal with aftermath of the migrant influx of 2015. 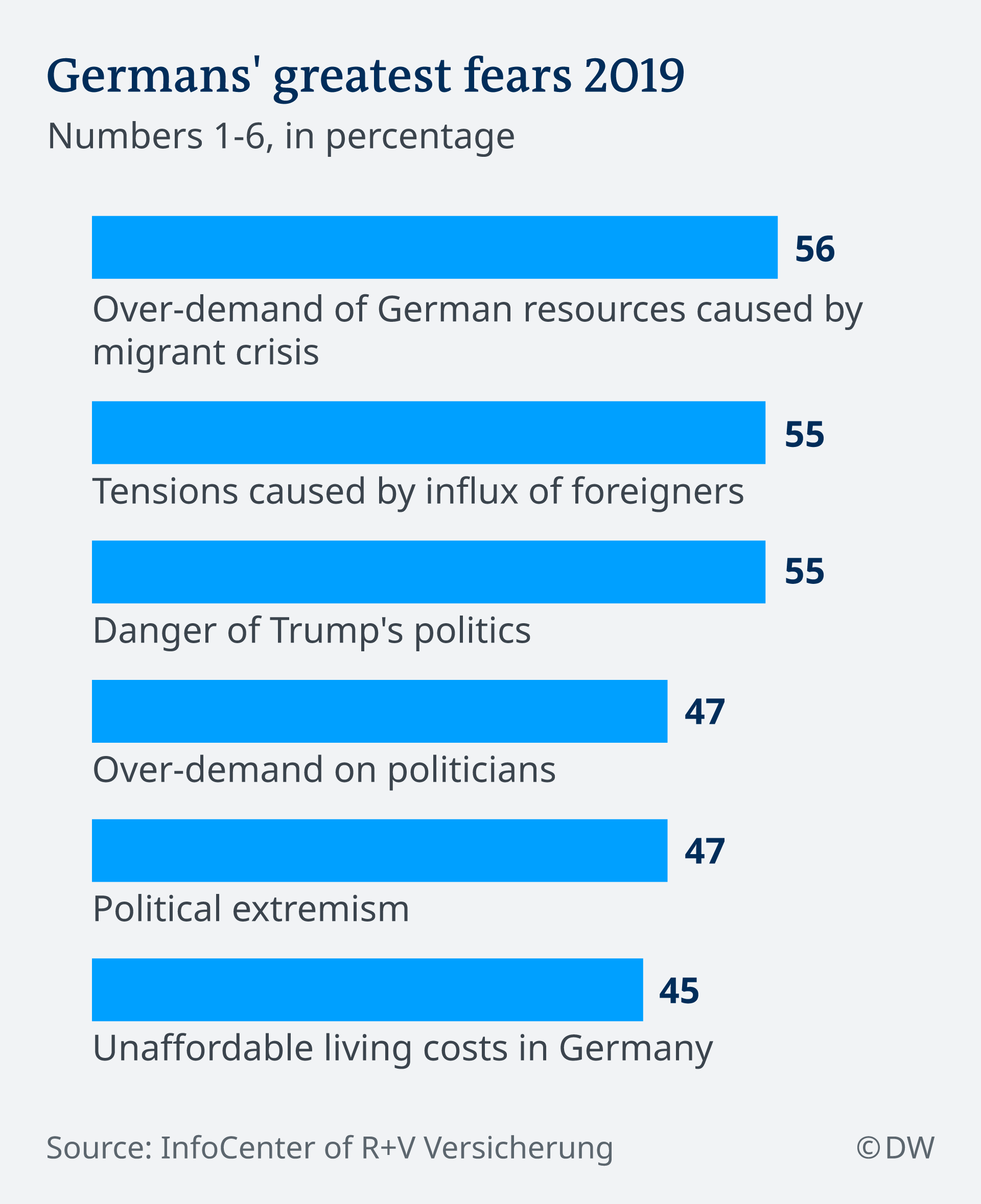 Brigitte Römstedt from R+V said she was surprised by the overall fall in their so-called fear index.

"There really are many pressing problems, such as climate change. But we have already noticed that in past years where there really was a lot to be afraid of, somehow people were more relaxed. That's what seems to have happened this year."

The stable economy and low unemployment seem to be the reason for an overall positive outlook, she said.

This year 56% of those polled said they were scared that the country would not be able to manage to deal with the number of refugees.

"Few people have had any negative first-hand experience with refugees, which could account for the mounting concern," said Ulrich Wagner, professor of social psychology at the University of Marburg. Incidentally the number of refugees to Germany has steadily declined since 2016.

"It's really got more to do with the fact that politicians and media discuss this issue a great deal — which triggers fear," he explained.

If a problem is debated intensively, people tend to worry about it more.

"For example, in the latest study, fear of terrorism has clearly gone down," Wagner pointed out. "We simply don't discuss this issue as much as we used to, and that means that people feel safer."

More to be afraid of in the east

The study also shows that woman are more likely to be scared than men. Brigitte Römstedt of R+V says that this hasn't changed.

This year's survey, however, confirms a new trend in German society: "In former East Germany the level of fear is more than 10% higher than in the West," she says, which explains why the right-wing populist party Alternative for Germany (AfD), which campaigns on an anti-refugee platform, could make significant gains in recent state elections in Brandenburg and Saxony.

How to overcome a fear of foreigners

"The paradox is that fewer migrants and fewer refugees actually live in the east than in the west, and yet the levels of fear are higher," says psychologist Ulrich Wagner. He explains that people who have had personal interactions with foreigners are less likely to believe unfounded horror stories about criminal refugees. "And in the east of Germany, people simply have fewer opportunities to meet refugees and debunk those myths." 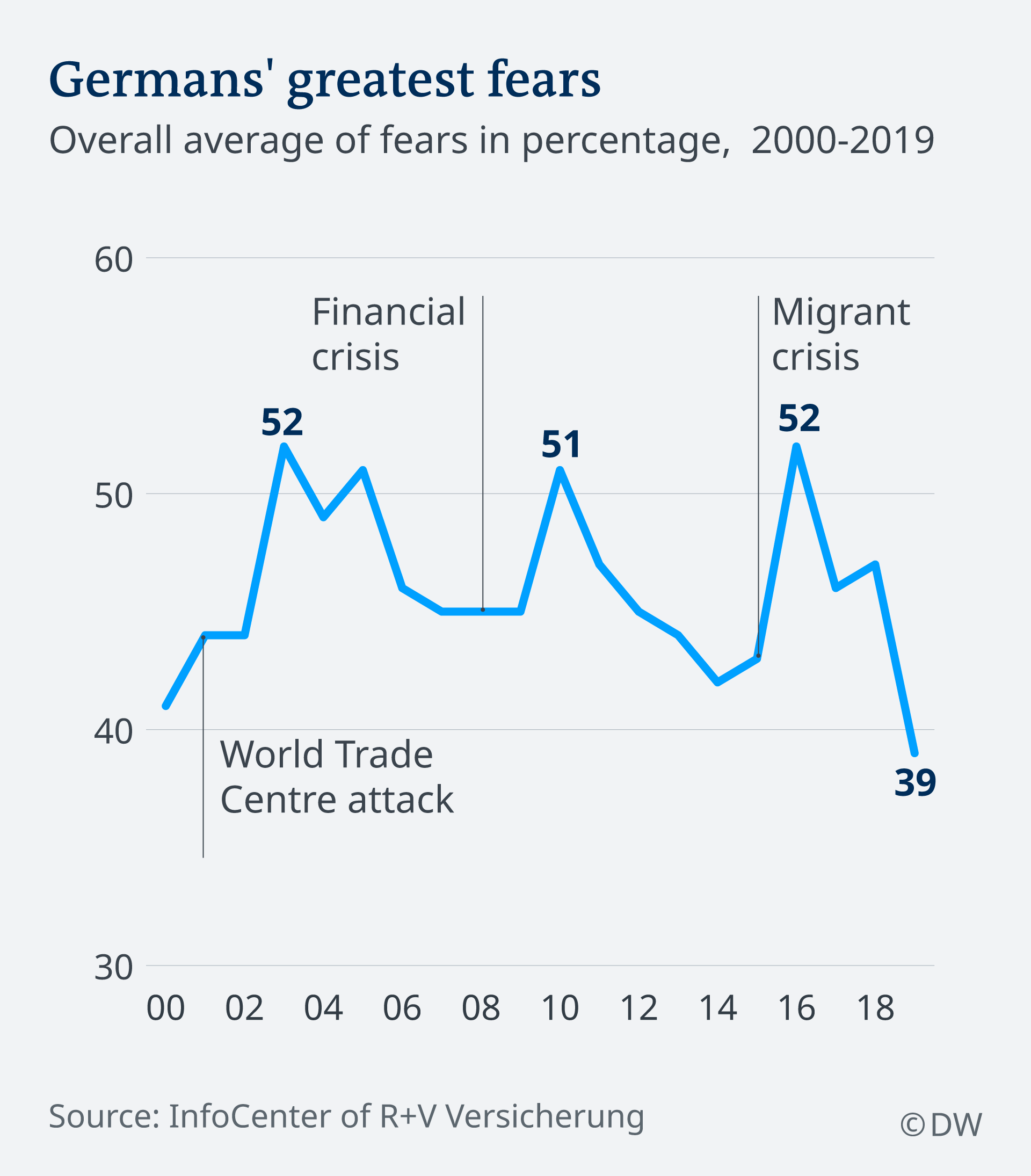 The authors of the fear survey point out what Germans should be most afraid of is cancer and heart disease. These health risks remain the top killers in Germany.

Also, around 400,000 Germans are injured in car accidents each year. Yet these things apparently are of little concern.

"Car accidents are everyday occurrences," says social psychologist Wagner. "Terrible, unusual incidents such as terror attacks are noteworthy, but they have little influence on our day-to-day lives."

The fear study shows that Germans seem to be becoming more level-headed. But the psychologist Ulrich Wagner warns that we should not wish for a world without fear. "Fear can be useful," he argues. "If I know that certain things really are dangerous, then it makes sense for me to steer clear of them."

So maybe a little bit of "German angst" is actually a good thing.

Opinion: Why Germany beats the pessimists

While investors from all over the world seek their fortunes in Germany, the prophets of doom are talking down Europe's biggest economy. Facts and fears hugely diverge, says economist Thomas Straubhaar. (07.06.2019)

In Germany, the willingness to pay for peace of mind dates back more than a century. But are today's insurance companies equipped to allay the nation's biggest fears? DW's Kate Ferguson takes a closer look. (29.03.2019)