In the wake of a rape case involving Syrians in Germany, conservative lawmakers are demanding the government re-evaluate the security situation in Syria. Criminal refugees should be able to be deported, they say. 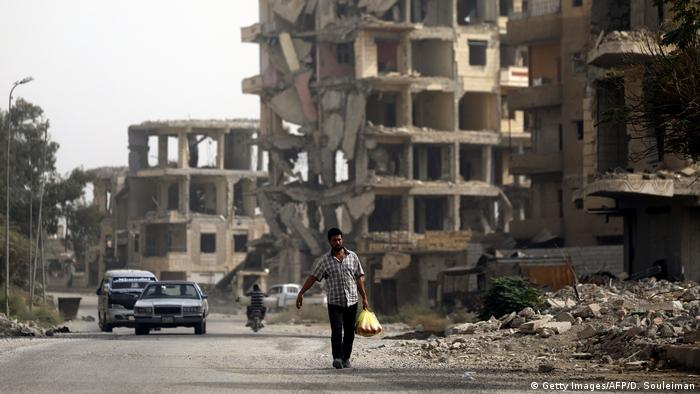 Who wants to deport refugees from Germany to Syria?

The rape of a young woman in the southwestern city of Freiburg has reignited the debate over deporting criminal asylum-seekers. At least seven Syrian men and one German man are suspected of raping an 18-year-old student in mid-October. In response, a number of conservative politicians have demanded the government be able to deport Syrian refugees accused of severe crimes back to their native country.

If the situation in war-torn Syria "continues to improve, even if only in parts of the country, deporting a limited circle of persons should no longer be barred across the board," Mathias Middelberg, a parliamentarian and domestic policy spokesperson for Chancellor Angela Merkel's conservative Christian Democrats (CDU), told Die Welt newspaper.

The terminology is often confused when debating the issue of asylum in Germany. Last year, lawmakers from the far-right populist Alternative for Germany (AfD) party pushed for the voluntary repatriation of Syrians within the framework of an agreement with the Syrian government. Previously, however, the AfD had demanded repatriating Syrians against their will. The current proposal put forth by the CDU, along with its Bavarian CSU sister party, also focuses on repatriation, though it is limited to criminal offenders at this point.

Those people with an approved refugee status can only expelled if they pose a threat to public safety and order, for instance if they have been sentenced to at least two years in prison. When that happens, the person in question loses his or her residence permit and is legally obliged to leave the country. If the authorities are forced to remove the person from Germany, that is called deportation.

Return to Kabul: Afghan Deportees One Year On

Is it likely Syrians will be deported?

By 2012, all of Germany's states had put deportation to Syria on hold due to reports of torture and violence across the country, a decision that has been reviewed and extended every year, most recently until the end of 2018. The security situation in Syria has not been re-assessed since 2012.

At a conference of Germany's interior ministers later this month, the states will again have to decide whether to extend the deportation ban to Syria. The vote must be unanimous. The CDU/CSU is currently represented by nine state ministers and the center-left Social Democratic Party (SPD) by seven — it is considered unlikely that the SPD will agree to deportations to Syria.

How safe is Syria?

Opinion varies. Some observers, including the AfD party in parliament, say the danger of war has ceased completely in certain regions. Actual fighting is only going on in a small part of the country, according to the AfD.

The United Nations says violent clashes in Syria have in fact subsided somewhat. The UN's refugee agency, however, says that every single region is directly or indirectly affected by the war and violence, and that no country should send refugees back against their will.

How many Syrian refugees live in Germany?

According to figures from June 2018, around 800,000 Syrians have fled to Germany since the start of the civil war. Only a few thousand of them are entitled to asylum. However, the vast majority are recognized as refugees under the Geneva Refugee Convention: they fled their country for fear of persecution and are therefore granted protection.

A third group has been granted what is known as subsidiary protection, due to the ongoing war in their own country. They do not qualify for asylum nor are they recognized as refugees under the Geneva Convention. They have not been deported, and instead are granted a residence permit that can be extended.

The number of returnees from Germany is probably negligible. The estimated numbers of Syrians who have returned to their country from Turkey, Lebanon, Jordan and Iraq vary between the tens of thousands to hundreds of thousands.

Most Syrian refugees worldwide can only imagine a return once the war is over, and aid supply is reasonably secure again, according to a UN survey.

Who is subject to deportation?

Currently, 235,000 foreigners in Germany are legally obligated to leave the country. Around 174,000 of these people have obtained a "Duldung," or tolerated permit to stay, and can thus legally remain for the time being. The other roughly 61,000 people without this permit are actually supposed to leave the country.

Asylum-seekers whose applications have been rejected are regarded as "obliged to leave the country." They have up to two weeks to file an appeal against their asylum decision with the help of a lawyer. On average, these proceedings take about six months and as a rule, the applicants cannot be deported during this time. If they lose their appeal, they must leave the country. In the first half of 2018, around 12,000 people were deported from Germany.