The politicians from the opposition AfD shared their impressions of the war-torn country after returning from a controversial trip. They reiterated their stance that Syrian refugees in Germany should be sent back. 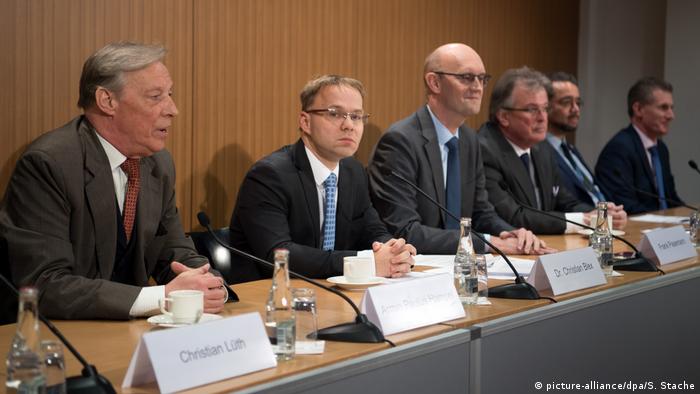 On Monday, the far-right Alternative for Germany (AfD) politicians who visited Syria earlier this month said the war-torn country could be classified as a safe country of origin for people seeking refuge in Germany.

A team of seven AfD politicians traveled to Syria in hopes of boosting their party's efforts to send back half a million Syrian refugees currently living in Germany.

The "private" trip organized by Christian Blex, an AfD state parliamentarian from the western state of North Rhine-Westphalia (NRW), had the stated aim of allowing the politicians to assess the security situation for themselves.

The trip was widely condemned by the German government and other opposition parties.

The AfD politicians on Monday shared their impressions of the country, which has been plagued by an increasingly multifaceted war, at a press conference.

Blex said that while "there is no dispute that there are still war zones in Syria," there are regions that had not been destroyed at all.

The politicians reiterated that Syrian refugees currently living in Germany should be sent back.

AfD parliamentarian Armin-Paulus Hampel suggested that the German government or the European Union could use funds at their disposal to "influence" Syrian President Bashar al-Assad to take back refugees under the condition that his critics are not put in jail upon their return.

Hampel said money could be a decisive factor to convince the Assad regime.

In Syria, the AfD politicians met with Syrian Foreign Minister Walid al-Muallim and the Minister for National Reconciliation, Ali Haidar. They also met Grand Mufti Ahmad Badreddine Hassoun, an Assad ally. They did not meet with any Syrian opposition groups.

The conflict in Syria entered its eighth year last week. More than 350,000 people have been killed and millions more displaced internally and internationally since the war began in 2011. The war has put global superpowers, including the US and Russia, on different sides of the conflict.

Turkey to expand fight against Syrian Kurds east of Afrin

Some 20,000 Syrians have left eastern Ghouta in the last week, the UN says. But hundreds of thousands still brave the bombs. Tariq is one of those resisting what he sees as forced displacement, reports DW's Anchal Vohra. (19.03.2018)

Refugees and refugee homes are still attacked nearly every day in Germany — but the figures dropped significantly last year. Left-wing politicians blame both the AfD and Angela Merkel's party for stirring up hatred. (28.02.2018)

Europe’s far right: Can the established parties stop them?