The head of the Central Council of Jews in Germany accused the judiciary of making allowances for anti-Semitic crimes. He also said he would be hard-pressed to find a European nation where Jews are safer than in Germany. 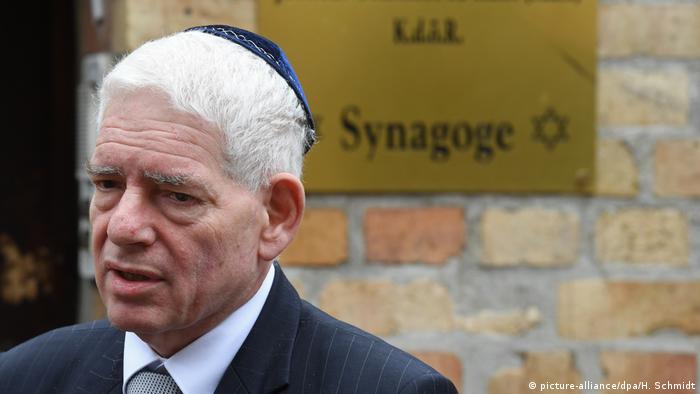 Judges in Germany give the impression of not taking anti-Semitism seriously, the foremost leader of the nation's Jewish community claimed in an interview published Friday.

In an interview with the website of newsmagazine Der Spiegel, Schuster said judges seemed "to look for reasons to give lighter sentences" when it came to anti-Semitic acts. This, he said, "opened the door to anti-Semitism."

Right-wing extremists had shown in the past year that they were prepared to kill, Schuster said. He cited the recent gun attack on a synagogue in the eastern German city of Halle, in which the perpetrator killed two people.

Schuster also addressed the rise of the far-right Alternative for Germany (AfD),  saying that the party had shifted the red lines of what was acceptable to say, causing minorities to feel unsafe. "From words come deeds," Schuster said.

However, Schuster said, Germany generally felt safe even after the Halle attack. "I would be hard-pushed to find a European country where one can feel safer as a Jew than in Germany," he said.

The Jewish leader also welcomed plans to recognize anti-Semitic motives in Germany's criminal code, something that would pave the way for tougher sentences. German Justice Minister Christine Lambrecht last month told parliament that anti-Semitism would be made an aggravating factor for hate crimes.

A survey by the European Union's Fundamental Rights Agency in late 2018 showed that Jews in Germany feel subject to more hostility than in other EU countries.

From the respondents in Germany, 41% said they'd been the victim of some sort of anti-Semitic harassment in the past year, while the EU average was 28%.

The survey also found that three-quarters of Jews in Germany did not wear any Jewish symbols, such as a yarmulke, in public.

Muslims are partners in combating anti-Semitism in Germany

As anti-Semitism remains one of Germany's most serious problems, one Berlin NGO is bringing Muslims and Jews together to fight discrimination through education. That means challenging mainstream German attitudes. (20.11.2019)

The ex-gangster in Berlin who hid his Jewish identity

The movie "Wet Dog," set in a largely Muslim Berlin neighborhood, looks into how religious identity can ruin friendships. The film modernizes events that happened 20 years ago — and that's not a coincidence. (31.10.2019)