German Interior Minister Thomas de Maiziere has spoken out against a rise in demonstrations by far-right groups. At a meeting in Cologne, he said hatred was being stirred up against refugees. 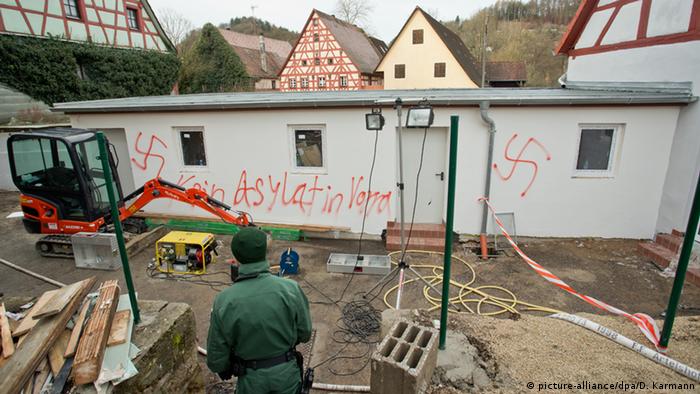 Thomas de Maiziere, who as head of the Interior Ministry oversees the surveillance of far-right groups, made the claim in response to a wave of demonstrations in recent weeks against what has been described as a "creeping Islamization" of society.

Following a conference in Cologne attended by interior ministers from Germany's 16 states, de Maiziere made his position clear: "We're not going to let them use the truly tough issues of refugees and political asylum for their own ends."

A rise in demonstrations in recent weeks has seen German leaders condemn the anti-migrant stance of some groups.

Around 4,000 self-styled "Hooligans Against Salafists" overturned a police van during a protest march in Cologne in October.

Meanwhile, up to 10,000 people attended a weekly rally on Monday organized by a movement known as "Patriotic Europeans Against the Islamization of the West" (Pegida) in the east German city of Dresden.

In a statement, German Chancellor Angela Merkel condemned the demonstrations saying there was "no place in Germany" for hatred of Muslims or any other religious or racial group.

The protests had been fuelled by a sharp rise in refugees seeking political asylum in the country.

"We can't stay silent when xenophobic sentiments are being aimed at people who have lost everything and come to us seeking help," German Justice Minister Heiko Maas said. "We must make clear that these demonstrations do not represent a majority."

De Maiziere added that the Dresden anti-Islam movement was exploiting concerns about the rapid rise of the far-right across the country.

He made the comment in the wake of an arson attack, which had racist overtones.

On Thursday evening, three converted buildings earmarked to house asylum seekers were set on fire in the town of Vorra, in the southern German state of Bavaria.

The police said racism and xenophobia were possible motives behind the arson attack after a nearby building was discovered to have been daubed with graffiti including swastikas and racist slogans.

"The suspicion that the culprits were from the far right is plausible, but the police will have to see if it is true," said Bavarian Interior Minister Joachim Herrmann.

Meanwhile, the interior minister of Lower Saxony, Boris Pistorius, told the Cologne conference that claims of the "Islamization" of Germany were based on a popular misconception.

"We know that just under 5 percent of the population are Muslim by extraction, regardless of whether they practice or not," he said. "Yet studies show that a majority of Germans believe that the number of Muslims who live here is not 4 million as it really is, but 15 to 20 million. The alleged facts on which these fears are based don't match up with reality."

De Maiziere also said there were legitimate concerns that needed to be addressed including whether Germany could continue to absorb increasing numbers of refugees.

Regional authorities have been struggling to provide housing for the influx of refugees with net immigration at its highest levels in two decades.

Germany had received more than 180,000 asylum applications since January, accounting for a 57 percent increase on last year. Many applications were from people fleeing Syria, Afghanistan, Iraq, Eritrea and Somalia, and also several Balkan countries.

The Cologne conference concluded that clear guidelines needed to be set for the "peaceful coexistence of all people" regardless of skin, color and religion.