German police are investigating fires at three planned refugee homes in the state of Bavaria. Racist graffiti were found on a nearby building, bolstering suspicions that the blazes were deliberately set. 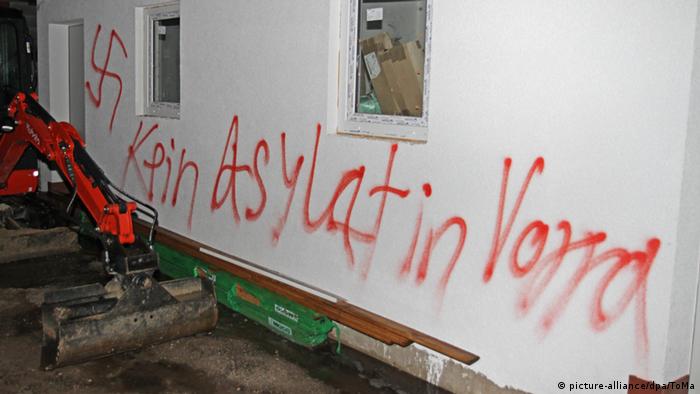 Three buildings that were intended for use as accommodation for refugees were severely damaged by fire on Thursday evening in the southern German state of Bavaria.

Fire services were called to the scene after a resident of the town of Vorra, some 50 km (31 miles) from Nuremberg, saw smoke emanating from a disused pub early in the evening.

Two other nearby buildings - a shed and an empty apartment building - went up in flames shortly afterwards.

All three buildings, which were reduced to an unliveable condition by the fires, had been renovated to be ready for use by refugees.

Damage to the buildings was estimated by the police at some 700,000 euros ($868,000). Police said that no clues had yet been found as to who was responsible for the fires.

One fireman was injured slightly while trying to extinguish the blazes.

Police say the likely cause of the fires was arson motivated by racism, citing the fact that swastikas and racist slogans were found on a nearby building.

The incident comes as Germany experiences a number of demonstrations, particularly in eastern states, by people protesting against what they call the potential "Islamization" of the country through migrants, including refugees.

Some observers fear that the protests, which are organized by groups that see themselves as coming from the middle of German society, are a sign that xenophobia is becoming increasingly socially acceptable in the country.

Germany takes on one of the largest contingents of refugees of any European country, with the number of people fleeing their homelands on the rise amid numerous conflicts, particularly across the Middle East.

Right-wing groups have organized protests with less politically extreme citizens to voice their concern over what they see as the Islamification of Europe. A counterdemonstration, however, was also joined in droves. (08.12.2014)