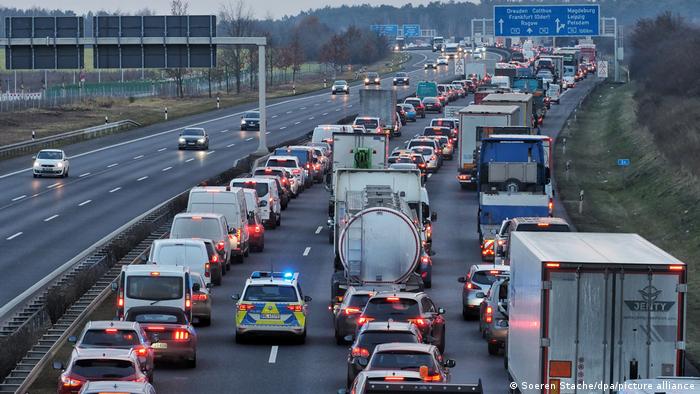 People in Germany regularly put up with long traffic jams, patchy internet and other out-of-date infrastructure

For months now, many in Germany have watched on with envy as the US makes great strides in vaccinating its population against COVID-19. Adding insult to injury, US President Joe Biden also recently unveiled a plan to invest $2 trillion (€1.7 trillion) in the country's infrastructure. As federal election season gets underway in Germany, the move draws attention to a sore spot for many Germans.

Many have complained for years that Germany is suffering by not investing more in infrastructure. In the 2019 Global Competitiveness Report from the World Economic Forum, Germany fell four places from the year before, from third place to seventh.

Germany needs to be more attractive as business location

Decades of neglect on top of growing demand have left a large share of Germany's complex network of roads and railroads in need of rehabilitation. Germany's autobahn and train lines are overburdened by the volume of modern-day traffic. Around metropolitan areas, traffic jams and train delays are routine. Travelers are used to weighing the risk of spending hours caught in traffic against the likelihood of train delays. According to a recent survey from broadcaster SWR, 40% of people in Germany also feel the government hasn't done enough for cyclists.

The federal government has sought to address these problems in recent years with the Federal Transport Infrastructure Plan. This increased spending on transportation infrastructure provides €270 billion ($324 billion) in funding to improve roads, rail and waterway over the next ten to 15 years. The project "Digital Rail Germany," introduced in January 2020, aims to increase performance of Germany's rail network by as much as 35%. But the digitalization of Germany's transport network will depend on the country pulling off a transition to 5G broadband that is still in process.

Around 11,000 of Germany's 25,000 rail bridges are over 100 years old. Some 4% of them are in unsatisfactory condition and represent a rehabilitation value of €7.3 billion, according to 2021 reports from the website Behoerden Spiegel, citing data from the federal government.

Germany's waterways tell a similar story: Many bridges, locks and dams are old and in need of repair. The Federal Association of German Inland Navigation (BDB) has complained that its annual budget is €200 million short of what is necessary to maintain the rivers and canals used for transport, according to reports from NDR.

In April, the government and Deutsche Bahn announced a financing agreement that provides for the "complete or partial renewal of a total of 2,000 bridges." Around €9 billion are earmarked for these renovations, to be completed by 2029.

Despite its status as one of the world's most advanced economies, slow or spotty internet connectivity remains a frustration in Germany. Even without a pandemic, the demands on digital infrastructure are expected to increase significantly in the coming years, driven by the advent of autonomous driving and the digitalization of the industrial sector, known as Industry 4.0.

In January, telecommunication companies Deutsche Telekom and Telefonica / O2 announced they would cooperate to close several hundred so-called "gray spots" in Germany. Gray spots are areas where only some internet companies provide internet, which limits internet access to their customers. The cooperation aims to complete 4G network coverage in Germany by the end of 2021.

In March, Deutsche Telekom said it currently provides 5G access to 80% of Germany and it expects to extend that to 90% of the population by the end of the year.

For years, Germany's federal government has adhered to spending policies guided by the "black zero," a commitment to a balanced budget and to not taking on new debt.

While this strategy might be second nature to a society wary of taking out credit, in practice it has led to a significant lack of investment in infrastructure.

On the one hand, years of pinching pennies positioned the EU's largest economy to unleash massive waves of financial relief after the coronavirus pandemic hit. On the other hand, the country's digital infrastructure was ill-equipped to handle the sudden increase in demand as schools and workplaces shifted online. Particularly public services, long known for having lots of red tape and using behind-the-times technology, have come under fire for failing to adapt to the exceptional situation presented by the pandemic.