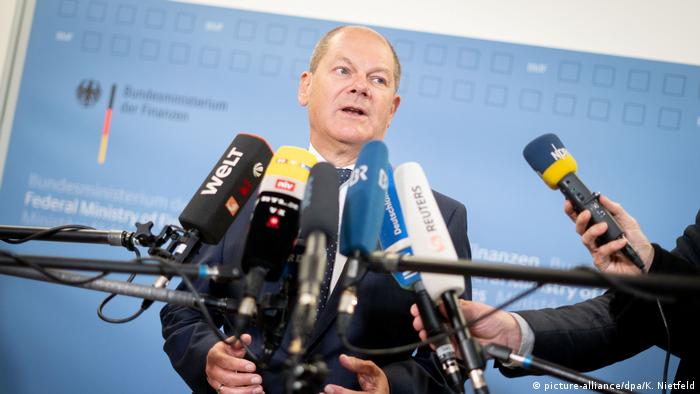 Germany had a record budget surplus of € 13.5 billion ($15 billion) at the end of 2019, the Finance Ministry announced on Monday.

"We've had a bit of luck, and of course we've economized well," German Finance Minister Olaf Scholz said in Berlin on Monday, just a year after he claimed the "fat" years were over for Germany.

It is the third time in the last five years that Europe's largest economy closed the year with a budget surplus. The 2019 surplus overtook a 2015 budget surplus of €12.1 billion.

Added to that figure is an additional €5.5 billion from a fund earmarked for refugees that went unspent, making a total surplus of €19 billion.

Germany has long been criticized internationally for stalling spending on infrastructure and other projects, leading to a stark imbalance with European partners.

Where did the money come from?

"We've had decent economic developments and, through that, have brought in additional tax revenue," Scholz said.

Current negative interest rates also meant that Germany paid a relatively low €12 billion in interest on its debt in 2019.

The state had also set aside a significant sum to be used in case of a hard Brexit, which was freed up after recent UK elections took that option off the table.

What will it be spent on?

The largest share has been allocated to a reserve for spending related to asylum-seekers in Germany, though it could ultimately be used for other projects.

As for the rest, Germany has significant investments planned for its next budget.

"We have to do something for infrastructure, for schools, for hospitals. We have to make sure we're prepared for the fight against climate change," Scholz said. He added that it was important to work toward equal living conditions in Germany so that "our country sticks together."

"That will all get a bit easier now," Scholz said.

Just a year ago, Scholz had famously defended the government's reluctance to use its surplus, saying, "The fat years are behind us."

Scholz admitted that past investment attempts had not gone as expected.

Funds pegged for spending on a state and local level, in particular, have tended to get caught up in red tape and a lack of skilled civil servants to process applications, he said.

Politicians from Germany's conservative Christian Democrats and business-friendly Free Democratic Party jumped on the news to advance their case for tax cuts.