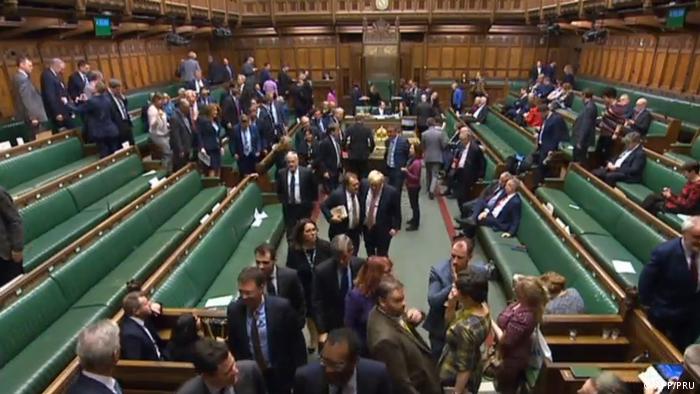 Member of the House of Commons ratified the government's Withdrawal Agreement Bill on Thursday evening by 330 votes to 231.

The bill, which will pass to the House of Lords next week for further scrutiny, paves the way for Britain to leave the European Union on January 31.

Lawmakers last year voted down repeated efforts by Prime Minister Boris Johnson and his predecessor Theresa May to secure backing for their Brexit agreements. However, the comfortable 80-seat majority won by Johnson in December's general election meant it was never in doubt that the bill would be passed this time.

Read more: Can Britain really do the trade deal it wants with the EU?

The legislation addresses initial issues over the separation — such as EU citizens' rights and Britain's financial settlement. It also sets out an 11-month transition period to agree a wider partnership with the remaining 27 nations. The deal must also be ratified by the European Parliament.

Ahead of the vote, Brexit Secretary Steve Barclay said the vote would allow Britain to move on from a long period of uncertainty.

"This bill will secure our departure from the European Union with a deal that gives certainty to businesses, protects the rights of our citizens and ensures that we regain control of our money, our borders, our laws and our trade policy," Barclay said.

The official leave date only marks the beginning of Britain's effort to reset relations with its closest trading partner — which will remain the world's largest single market despite losing one of its top three economic powerhouses. Johnson has thus far insisted that the transition period designed to enable the next stage of talks — during which the UK must pay into the bloc's budget and remains bound by most of its rules — will not be extended.

Ahead of initial talks with Johnson on Wednesday, European Commission President Ursula von der Leyen said it would be"basically impossible" to agree everything within that time frame.

Unless the UK asks for an extension beyond 2020, trade relations from the start of 2021 will either be governed by whatever agreement can be reached, or World Trade Organization rules.

Britons voted 52% to 48% in favor of Brexit in a June 2016 referendum that has since left the country bitterly divided between the Leave and Remain camps.

Opinion: UK on course for a hard Brexit