Opinion: UK on course for a hard Brexit 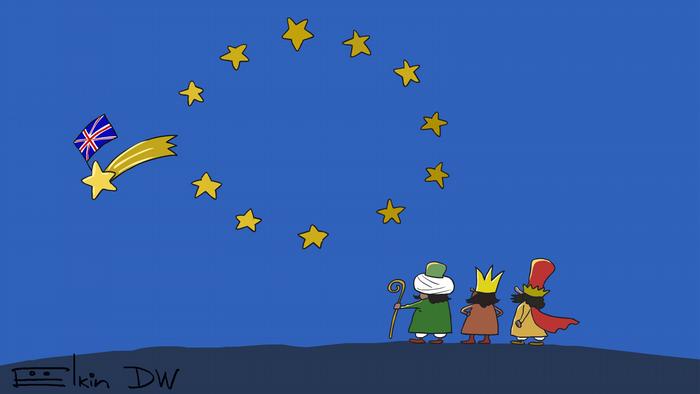 This summer, the anti-Brexit movement succeeded in drawing 1 million protesters to London's streets. But today, opposition to Brexit — just like the parliamentary opposition — has all but vanished. Following Boris Johnson's huge electoral victory last week, British Parliament on Friday passed the European Union withdrawal agreement bill with a big majority. It was almost shocking to see how little impact arguments against Brexit, and for a close relationship with the EU, have had.

Johnson now commands a solid parliamentary majority and aims for a hard Brexit. He says Britain no longer wants to adhere to EU rules and laws, which means he is seeking a minimalist free trade agreement with the bloc. Johnson's talk of "Canada-plus" and striking a great deal with the EU is just empty rhetoric. In reality, this is simply the manifestation of the well-known right-wing Conservative project to further deregulate the UK and transform it into some kind of international buccaneer.

Parliament no longer has a say

Tellingly, Johnson removed all concessions included in the bill that his predecessor, Theresa May, had once made. Now, Parliament no longer has a say in negotiating the trade deal with the EU. An ironic turn of events, given that Brexiteers had always argued leaving the EU was about returning power to their very own "mother of all parliaments." This was, simply put, a lie — just like almost all other arguments put forward for Brexit.

Likewise, the bill no longer pledges to align British workers' rights along EU standards, and has watered down the rights of refugee children to be reunited with their families. In sum, all concessions to make the withdrawal somehow more palatable have been scrapped. This marks a victory for those who want a hard Brexit, who want to sever all ties with the EU. They are ecstatic. And Johnson, it is now clear for all to see, is not the moderate Tory he masqueraded as during the election campaign.

Now that the path to a hard Brexit has been paved, Johnson is trying to effectively brainwash the people: He wants to stop the term "Brexit" being used, and plans to shut down the Brexit department. Brexit has deeply divided the country and Johnson wants to bring it together again — by telling Brits to stop discussing the matter.

Johnson's behavior so far is inspired by the right-wing populist playbook: He has peddled countless lies, deliberately misrepresented reality, persistently employed hyperbole and clouded peoples' minds through propaganda. This is behavior we have seen by many other populist regimes across the world. And, in this populist vein, Johnson now wants to axe the funding for public broadcaster BBC. Its journalists, who could have done more to scrutinize and question Brexit, are in Johnson's view too independent and lack loyalty towards the government.

The leaders of EU member states and Brussels negotiators must now be extremely careful in how they deal with London. German Chancellor Angela Merkel was right when she warned several months ago that Britain could morph from a friendly neighbor into a fierce competitor. Nobody, in short, should be lulled into thinking they can trust Johnson when he talks about "neighbours and friends" on the continent. This is merely part of his carefully cultivated facade, just like his unruly haircut.

It is a painful but simple fact that from now, one will have to be extremely careful in dealing with the British government and prepare for all kinds of trickery. Johnson cannot be trusted, and neither can his Brexit negotiator, Michael Gove. Both will do what ever they can to take advantage of the EU. The bloc will have to treat Britain like an adversary when it negotiates its future relationship with the country, a trade deal and other things — a tragic nadir after decades of good neighborly relations.

Opinion: Despite setbacks, we must continue to vaccinate 6h ago