The EU and the UK have reached a new deal that's supposed to ensure Britain leaves the European Union in an orderly way. But how's this deal different from the one negotiated by the government of previous PM Theresa May? 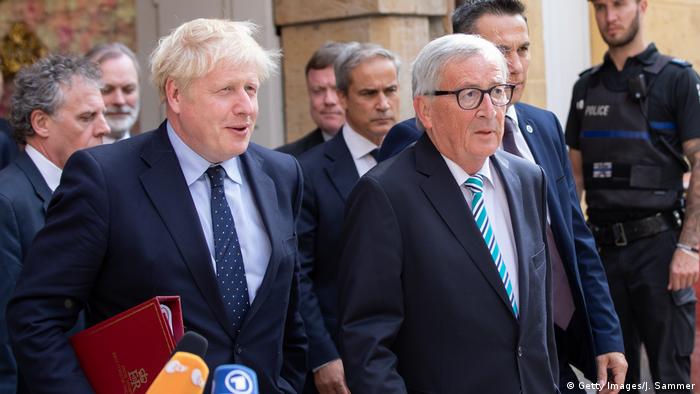 Negotiators from the European Union and the United Kingdom struck a new tentative Brexit deal on Thursday morning, which now needs to be backed by EU member states and the respective parliaments.

Here are the key details of the revised withdrawal agreement and political declaration:

The previously agreed settlement on citizens' rights after Brexit and Britain's divorce bill stay as they were. The EU's chief Brexit negotiator, Michel Barnier, told reporters in Brussels that Britain now agrees to pay its financial commitments to the EU. These have been estimated at around 39 billion pounds (€45 billion, $50 billion).

There would also be a transition period of 14 months until the end of 2020, which can be extended by one or two years.

Barnier said he believes the deal can be ratified by the end of October. He called it a "fair and reasonable basis for an orderly withdrawal" by the UK.

It is, however, unclear if Johnson can muster the necessary backing to get the agreement through the British Parliament.

Some die-hard Brexiteers in Johnson's Conservative Party who helped bring down his predecessor, Theresa May, have voiced support for the deal.

"It's a really exciting and positive deal," said Jacob Rees-Mogg, leader of the House of Commons. "It removes the undemocratic backstop. It is a huge advance for the whole of the United Kingdom. It will ensure that we are one single customs territory."

However, Brexit Party leader Nigel Farage has urged Parliament to reject it. Farage said Thursday the deal is "just not Brexit" and would bind Britain to the EU in too many ways.

The opposition Labour Party leader Jeremy Corbyn has condemned the deal as "even worse" than the settlement reached by Theresa May. Johnson's Northern Irish allies, the Democratic Unionist Party, have also rejected the deal.

Brexit isn’t the only topic that will be hotly discussed at the upcoming EU summit — issues such as top job posts, money and the bloc's expansion will also have to be addressed. But will there be any answers? (17.10.2019)

European officials have said they need the hard details of a Brexit withdrawal deal within hours rather than days, ahead of an EU leaders' summit. EU chief negotiator Michel Barnier said three issues needed resolution. (15.10.2019)

Negotiating teams are aiming to hammer out the legal text of a Brexit deal ahead of the EU's summit of leaders. Any potential deal they reach faces its toughest test at the political level. (16.10.2019)

Merkel: Brexit deal 'better for everyone'

Finding a solution to Brexit is "squaring the circle," German Chancellor Angela Merkel told the Bundestag before heading to Brussels for a crunch EU summit. Merkel also stressed Germany would not send weapons to Turkey. (17.10.2019)

DW looks back at Boris Johnson's career. Long before he became the UK's political leader, he'd made no secret of the fact that he wanted the top job in British politics.