Does Germany need a stimulus package to cope with recession? | Business | Economy and finance news from a German perspective | DW | 21.08.2019

Does Germany need a stimulus package to cope with recession?

German Finance Minister Olaf Scholz has been mulling an economic stimulus package, should Europe's largest economy slide into a full-blown recession. It would mark a departure from a policy of balanced annual budgets. 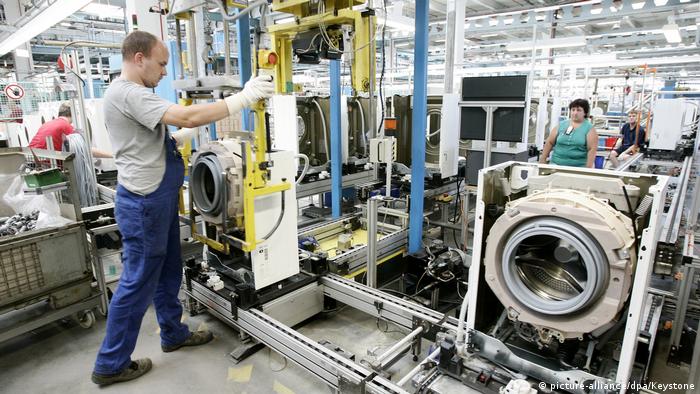 The news first reported by Bloomberg on the weekend piqued the interest of economists worldwide. German Finance Minister Olaf Scholz, the report said, had for the first time mulled the possibility of putting together an emergency stimulus package to prop up the economy, should a full-blown recession beset the nation.

This in itself revealed a fundamental change in thinking and philosophy as for a decade or so Scholz' predecessor, Wolfgang Schäuble, had been an unwavering supporter of a policy that just wouldn't accept any fresh borrowing. His balanced budget policy had even made inroads into the German language, with lawmakers and ordinary people starting to call it a "black zero" approach, symbolizing Schäuble's Swabian obsession with not letting any balance sheet end up in the red.

So far, Scholz had not been known for thinking differently. But with global economic risks stubbornly refusing to go away, there's growing awareness in the government that forging ahead on the well-trodden path might not be ideal.

What is the state of affairs?

The whole debate about the possible need for fiscal stimulus was triggered by the release last week of second-quarter economic data by the Federal Statistics Agency (Destatis). It announced that the German economy contracted by 0.1% in the April-to-June period (quarter on quarter) and also provided some indicators that things didn't look too rosy for the current quarter either.

Negative growth in two successive quarters would see Germany slide into a technical recession by most analysts' definition.

In a fresh monthly report earlier this week, the German central bank, the Bundesbank, put some more oil into the fire by stating that it did not see any signs of a summer recovery.

The bank agreed that poor exports had been key to the ongoing weakness, but acknowledged that continuously strong consumer spending and construction had prevented the overall picture from looking a lot worse.

The lender said "it remained to be seen whether exports and manufacturing catch themselves in time before dragging domestic indicators like employment and consumer spending down with them" as uncertainties over the trade conflict between China and the US as well as the specter of a chaotic UK exit from the European Union had pummeled Germany's export-oriented industries.

Deutsche Bank Chief Economist Stefan Schneider sees particular problems in the German automotive industry, which employs roughly 800,000 people at home. He says global demand for vehicles will not rise before the final quarter of this year.

Schneider singled out the chemical industry as another problematic sector. He warned that chemicals production in Germany looked set to shrink by 2.5% this year and by another 1% in 2020, adding that apart from facing unfavorable cyclical developments, the industry had an unresolved structural problem that made it hard to react to any shifts in global demand.

"Given the increasingly fragile state of the global economy, the realization of one or more risks could easily push the German economy into a completely different scenario, where growth revisions of a few tenths of a percentage point will not be sufficient," Schneider warned.

Can a stimulus package really help?

Economists say the answer would depend on what you would do with the money the government might be willing to pony up and of course on the size of the package. It should assume more than a mere alibi function.

Not many details are known so far about what the finance minister is planning. Media reports said Scholz was mulling a €50 billion ($55.4 billion) package to shore up the economy — that would more or less resemble the scope of fiscal stimulus from the state during the global financial crisis about a decade ago.

The minister, the reports said, thought about spending the extra resources on fueling domestic consumption and protecting jobs, particularly by topping up wages of those forced to do part-time work. That approach had worked well before, enabling companies to keep many employers on board and saving them the trouble and resources of finding new workers when the economy recovered. That strategy could work again.

Obviously, Scholz also mentioned the possibility of creating incentives for homeowners willing to pay workers to improve the energy efficiency of their houses.

There was no mention of what many economists had been demanding for years — to drastically increase investments in the nation's physical and digital infrastructure, which could also function as a decisive job creation program and have the effect of removing current backlogs. Additional jobs would in turn support consumption and higher tax revenues.

Strictly speaking, it would be a sensible strategy financially in all conceivable ways. Such long-term investments in infrastructure would profit from zero or negative government bond yields, meaning that the state could hardly get a better deal right now when in need of borrowing.

The German finance minister doesn't seem to be in a hurry, though, indicating that a stimulus package will only come if and when Germany is in a very pronounced recession. And before he can allocate anything, the lower house of parliament must agree there's a crisis at all to pave the way for that extra spending.

There's no denying that a growing number of analysts worldwide have been criticizing Germany for doing too little too late. Many suggest it's unwise to wait until we get the official figures for the current quarter only to see on paper that Germany is really in a technical recession.

ING Chief Economist Carsten Brezski for instance told DW the writing had been on the wall for quite some time now, saying that "the German economy has more or less been in a state of stagnation since the summer of 2018." He noted that "the crucial question now is whether the German government will just sit back or step into action and offer some fiscal stimulus."

In contrast, the president of the Berlin-based Economic Research Institute (DIW), Marcel Fratzscher, told DW that the German economy was in good shape, meaning there was no reason to panic.

"We have a very strong labor market with record-high employment," he argued. "The current problem really stems from global trade conflicts and is not homemade — all in all, there's no reason why Germany shouldn't have another three to five good economic years."

In fact, the number of people employed across Germany in the second quarter increased despite any recession fears. Particularly owing to huge demand in the services sector, a record 45.2 million people were on payrolls — that's 435,000 more than in the period a year earlier.

Earlier this week, analysts from Deutsche Bank lowered their forecasts for the German economy. But like most others, they still expect gross domestic product to grow in Europe's powerhouse, albeit only by 0.3% this year and 0.7% in 2020.

In other words, growth will slow in comparison to recent years but there will still be growth — and that's not the definition of a dilemma reminiscent of the global financial crisis in 2008/09.

The Bundesbank has warned that a slump in the German economy could have continued over the summer. It cited the US-China trade war as one factor weighing on German exports. (19.08.2019)