There's no denying anymore that Germany's economy is slowing. Yet, this isn't the time for stop-gap measures, says DW's Henrik Böhme. Instead, he argues, sober-minded decisions by both politics and businesses are needed. 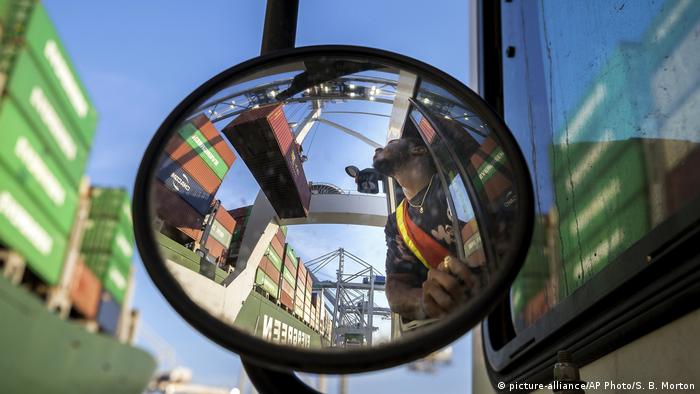 It's fairly easy to talk down an entire economy, especially when the ugly "R" word — standing for a recession — is being used as frequently as it is today. On the other hand, closing ones eyes to the reality isn't appropriate either.

German industry, which is a main pillar of this country's economy, has long slipped into recession. More and more companies are scaling back their production as the pessimists gain the upper hand over the optimists. The reasons they cite are everywhere the same: trade conflicts are a prime concern, but also the emerging transformation and looming crisis in the auto industry. Add to it the growing likelihood of a no-deal Brexit and mass protests in Hong Kong, and you'll get an explosive mixture set to ruin business plans.

That is why the 0.1% contraction in Germany's second-quarter economic output, reported today by the country's statistics office, comes as no surprise. And given recent indications that the current quarter isn't going to be any better, with another contraction expected, the prospect of a so-called technical recession is looming large.

The ugly term, coined by economists and meaning two consecutive quarters of negative growth, is however nothing to panic about. It is also not a call for the government to give the economy a fiscal boost, as currently demanded up and down the country.

This downturn, although partly caused by external factors, is the result of a normal business cycle cooling after almost eight years of expansion in Germany. A business cycle is an undulating graph with ups and downs, and not a straight line going ever higher.

And it's important too! In the course of the past decade, many German businesses have been running red-hot and weren't even able to meet demand at times. Capacity utilization reached more than 90%, and skilled labor has become precariously scarce.

Now as the downturn seems to become a reality, it's a time for returning to normal by reducing overcapacity and starting maintenance of existing production facilities for which there was only little time in recent years.

Moreover, fears of mass layoffs are completely unfounded, at least for the time being. Of course, it's a bit scaring to hear the news from big corporations such as Bayer, BASF and Volkswagen, who all announced plans to cut back on staff. But those companies are not necessarily representative of the German economy. It's the thousands of small and medium-sized businesses which created the jobs that fueled the German employment boom of the past years. And still, there are more than 1.4 million vacancies to be filled.

Employers can also resort to the proven measure of shortening workers' hours. The state compensates employees for the shortfall in income for a couple of months, and employers won't have to dismiss them, thus securing precious staff for the future. This has given German companies a headstart after the last crisis, and will do so again.

At the moment, the German Labor Agency has registered about 50,000 applications for short-time work. By comparison, after the financial crisis of 2009, when the economy slumped by 5%, some 1.5 million employees were working shorter hours. The measure clearly helped stave off mass redundancies at the time.

No fiscal boost, but an investment drive is needed

What would immediately help alleviate the current slowdown, however, is a rapid reduction in income tax for employees. Already, household consumption has come to be a significant crutch propping up Germany's slowing growth; otherwise the decline would have been much steeper.

So it's high time for the finance minister to open the state's purse, to make it easier for Germans to spend and consume more. Bad economic news only makes them stingier and causes companies to refrain from growth-boosting capital expenditure.

In times like these, no one needs a "black zero," which has come to symbolize Germany's successful effort to bring state spending in line with a balanced budget. What's needed are an investment program and consumption incentives. And indeed, there is much to do given Germany's huge infrastructure investment backlog.

What's welcome are smart ideas, like the one coined recently by the German economist Michael Hüther. He has demanded the creation of a "Germany Fund" worth €450 billion ($503 billion) that's to be spent over the next 10 years. The fund could be financed through capital markets, where German debt is currently selling like hot cake and for which investors are even prepared to accept negative yields in exchange for their low risk. There are multiple purposes for which the money could be spent, including public transport, faster internet, housing, education and climate protection.

All of this sounds like a great opportunity for Germany to soften the blow of the imminent downturn. But I'm afraid the current government in Berlin is the wrong one to seize upon it.